In our ‘Europe2025’ series, setting the agenda for the EU in the new term following the coming elections, Peter Scherrer outlines a project for rethinking Europe from a trade-union perspective.

The populists present themselves as the voice of the ‘little people’. For trade unions tackling populism entails standing up for a fair and sustainable globalisation. ‘The Andalusians have made history,’ said the national Vox party leader, Santiago Abascal, on election night in the Spanish region in December, claiming a ‘triumph’. This was the most recent […] 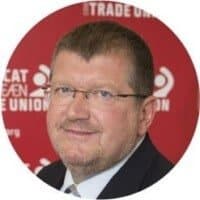 “What you are going to put on your political agenda is pretty much out of date,” was the comment of a trade unionist with 50 years’ experience of work in trade union policy, when I told him about the ‘Strategy for more Democracy at Work’. Well, he is right and wrong at the same time. […]

The German economy is flourishing, with growth expanding throughout 2017. Unemployment, at under 4 per cent, has never been lower since German reunification in 1990 and equals one of the lowest rates in the EU. Businesses are competing to recruit staff. The employment rate is second only to Sweden’s, and productivity, too, is above the […]

For decades, the European trade union movement has been urging EU authorities to put an end to ‘regime shopping’, which allows companies in Europe to move their headquarters to another Member State where they pay fewer taxes and lower wages, regardless of where their operations take place. Artificial commercial arrangements permitted within the single market […]

It is called disruption. New digital technologies are having unforeseen impacts on industries and services in all directions. This fourth industrial revolution is testimony to the power of human ingenuity and innovation – and has the potential to bring major social benefits and challenges alike. The impact on labour markets and workers has so far […]