Trafficking linked to the Ukraine exodus underscores the need to tackle this scourge—and for a unified EU response.

Human trafficking remains a scourge on our societies. Across Europe and the world, people are trafficked every day, mostly for sexual and labour exploitation. It is modern-day slavery and we must do our utmost to end this horrific phenomenon. In my work in the European Parliament, tackling and combatting trafficking is at the very top of my agenda.

As such, I recently travelled to The Hague in the Netherlands, as part of a mission with the European Parliament’s Committee on Women’s Rights and Gender Equality to discuss how to combat human trafficking, and how to protect its victims.

My colleagues and I spoke with several Dutch national representatives tackling sexual exploitation, sexual violence and human trafficking, including about the policies they have in place. The war in Ukraine has crystallised this issue, with traffickers seeking to gain by trading in the most vulnerable as they flee their homes.

The reports of trafficking taking place at the Ukraine border are incredibly concerning and action must be taken to protect those affected. Police forces all across Europe must receive the appropriate training to be prepared when faced with situations where trafficking tends to occur, whether that be at border crossings or even in car parks and petrol-station forecourts. We must try our best to prevent this, rather than cure it after the fact, and put in place concrete frameworks to stop this crisis from proliferating.

Given the continuing flow of refugees, arriving in European Union member states often with few or no possessions while fleeing conflict in their home country, it is the EU’s duty to step up in solidarity with the Ukrainian people. The only way this can happen efficiently is through an EU-wide anti-trafficking plan.

This is what I asked of the European commissioner for home affairs, Ylva Johansson, in a joint letter with other MEPs: we must raise awareness about human trafficking among member states through collaboration with law enforcement and civil society. Moreover, we must take care of the most vulnerable and ensure that nobody coming to the EU from Ukraine can fall into the hands of traffickers.

Following calls for wider European co-operation, the commissioner published in late March a ten-point plan, with programmes to unify our efforts for welcoming Ukrainian refugees. Most importantly, this plan will ensure that arrivals in the EU will be overseen properly, to prevent situations of trafficking from slipping through the net.

While in the Netherlands, we also met members of civil-society organisations who seek to protect women fleeing from trafficking, as well as visiting a shelter which supports victims of trafficking. While gaining a useful insight into the work that these organisations do in protecting and empowering women, I learned much about how to support women not only to escape from those who have trafficked them but also to begin a new life afterwards—including by providing social supports such as housing, education and employment opportunities.

The last stop on our mission was the International Criminal Court, where we learned about how evidence on sexual violence, rape and trafficking as war crimes is being collected, and how those crimes are being prosecuted. A priority of mine, and of EU member states, is to ensure Russia is held accountable for any war crimes committed by it or its soldiers. It would be utterly intolerable for Russian forces to be given any kind of immunity on this matter.

The Ukrainian people deserve justice. We must ensure that prosecutions for such horrendous crimes can be secured and withstand challenge. Drastic times call for drastic measures and we must do all in our power to fight this injustice.

When it comes to supporting someone who was raped or subject to sexual violence in a war zone, we need though look no further than our excellent non-governmental organisations. In the 1990s, I saw their effectiveness first-hand with the remarkable work of the Dublin Rape Crisis Centre in the Bosnian war. The broad experience NGOs have in this area means they are uniquely equipped to support and assist victims of sexual violence, and we as policy-makers must support them in doing that important work.

The EU already supports NGOs in this regard, most notably through the Daphne programme, which seeks to tackle violence against women. This is a crucial programme and is part of a larger support to NGOs. As we witness continued violence and trafficking, in the context of the Russian invasion of Ukraine and the pandemic, such funding is vital.

At EU level, we are doing our utmost to tackle trafficking and violence against women and our mission to The Hague has cemented my view that member states have much to learn from each other in this fight. Many of the policies and initiatives presented by the Dutch minister for migration, Eric Van Der Burg, were worthy of note and Ireland among others can learn from them. I am sure other member states have similar policy success stories to share too.

When it comes to human trafficking, we must all work together to combat it—this is one of Europe’s strengths. For example, when we seek the prosecution of Russian soldiers, member states must work together to support the collection of evidence of war crimes by the Ukrainian authorities, to ensure robust convictions.

The Dutch example shows us that combating trafficking, for all victims from across the world, is possible—and that EU mechanisms are a crucial element in achieving this goal. 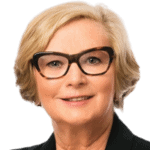 Frances Fitzgerald is a member of the Women's Rights and Gender Equality Committee in the European Parliament and vice-chair of the European People’s Party group. She has held various ministerial positions in Ireland, including as tánaiste (deputy premier), having been chair of the National Women’s Council and vice-president of the European Women’s Lobby.