‘Tell them your story. If you are asked about your weaknesses, put them in a positive light. Don’t be afraid to ask questions!’ During a webinar organised for Ukrainian refugees by Mamo pracuj (Mum, work!), a Kraków-based nongovernmental organisation supporting mothers returning to the labour market, a dozen or so women learn the basics of job interviews. When the question-and-answer session starts, the attendees inquired about the recognition of Ukrainian educational qualifications in Poland, gaining access to job vacancies and salary expectations.

The founders of Mamo pracuj launched a programme specifically for Ukrainian women seeking jobs in Poland shortly after the outbreak of the war in February. ‘We were all horrified. I saw women with children arriving at the railway station and we wanted to do for them what we already do best for Polish women, which is to help them find their competencies [in the job market,]’ recalled Marcelina Palka, a project co-ordinator.

Thanks to more than 100 expert volunteers—such as recruiters, human-resource managers and career coaches—some 500 Ukrainian refugees are being helped to find decent work in Poland. Mamo pracuj’s ambition is to provide Ukrainian women with multi-faceted support, from legal advice to psychosocial assistance. But the organisation is just one of many public and private initiatives which have sprung up to support the integration of Ukrainian refugees, since the Russian invasion began on February 24th.

Thanks to their proximity and cultural similarities, for almost a decade (and particularly since the beginning of the Russian-Ukrainian war in the Donbas in 2014), Ukrainians have comprised the largest group of foreign workers in Poland. Although accurate data are hard to come by, according to various sources 1.5-2 million Ukrainian migrants were already in Poland before the war, mostly performing low-paid jobs in industries such as construction, transport and agriculture. But there has been a massive demographic shift.

Approximately 150,000 Ukrainian workers, mostly men, have left Poland since February to join the war effort, while Poland’s government has granted all Ukrainians fleeing the war temporary right of residence and full access to the labour market. Although they are commonly referred to as such, most Ukrainians in Poland are not officially refugees. They have been granted special status, with very few applying for asylum: most plan to return home at some point and many have already done so.

According to figures this month from the Ministry of Digital Affairs, an estimated 1.346 million people from Ukraine have applied for a Polish Identification Number (PESEL). This provides them with the same benefits as Polish citizens, including access to health care, free public education and monthly child benefits. The vast majority are women, as Ukrainian men between the ages of 18 and 60 are banned from leaving their country. But this has led to significant labour-market mismatches.

‘Ukrainian refugees are mostly women so obviously some of the job offers will not be suitable for them because they concern typically male professions like transport or construction. The [Polish] labour market badly needs those Ukrainians who returned home to join the fight. Whole sectors like construction depended on Ukrainian migrants,’ said the analyst Zbigniew Gajewski, in a panel organised by the Friedrich Ebert Stiftung (FES) on the impact of Ukrainian refugees on the Polish labour market earlier this year.

Although the Russian invasion has forced a large proportion of educated and high-skilled workers into exile, displaced women generally face a double disadvantage, for being women and for being migrants. ‘This crisis made people who were very well-integrated and respected in their communities leave to save their lives. Now they are competition to Poland’s low paid workers. It is extremely difficult to find a position where their qualifications could be used,’ says Olena Davlikanova from FES Ukraine, a refugee herself who fled to Poland.

The most frequent concerns of these often-traumatised women are access to housing and childcare, finding decent work and navigating the Polish language. ‘The language barrier is a huge challenge,’ said Palka of Mamo pracuj. ‘If a woman speaks Polish or English, we know that there are much greater chances that she will find a job. If we have a lady who only speaks Ukrainian or Russian, going through the recruitment process becomes a big problem.’

According to reports in the Polish media, by late August some 420,000 Ukrainians had found employment in Poland thanks to the simplified procedures. Ukrainian migrants do not need to apply for a work permit; instead, an employer has 14 days to report that they are employing a Ukrainian citizen. According to a source at Employers of Poland, some 70 per cent who have been hired are women, with half engaged in low-paid work in manufacturing, services or agriculture.

The number of refugees actually employed in Poland may differ substantially from the official statistics, as the data refer only to the Ukrainians who have taken legal employment. In practice, due to language barriers and childcare issues, many refugees work off the books in the informal economy.

Trade unions and business groups agree that opening up the labour market was a positive step towards the integration of Ukrainian workers into Polish society, especially given the pressures facing NGOs and local governments responding to the influx. ‘Poland is still a relatively poor country. It is very difficult to provide accommodation and aid [for the large number of refugees]. How long we can hold on remains an open question,’ said Sebastian Koćwin, vice chair of the Polish trade union confederation, OPZZ (the All Poland Alliance of Trade Unions).

Although unions and labour inspectors say they are vigilant towards potential exploitation of Ukrainian refugees, so far very little has been reported through official channels. Poland’s chief labour inspectorate said it had no records of abuses of Ukrainian refugees working in Poland, but Koćwin of OPZZ said that while the unions were aware of many violations, few workers came forward to file a complaint.

In one case, a Ukrainian refugee had been hired to work in hospitality via a temporary agency and forced to work from 5am until 11pm, while her three children stayed in a hostel without adult supervision. ‘Even before the outbreak of the war we had issues with illegal employment and even cases of forced labour. Now given the scale of the crisis, we have a lot of concerns,’ Koćwin said.

Cery common among the work offered are freelance contracts, known colloquially as ‘junk’ contracts. Koćwin estimates the proportion of legally-employed refugees on such contracts at 70 per cent. While many Ukrainians do want to return home when the conflict is over, freelance contracts are based on the civil law instead of the labour code. They may be subject to minimum-wage regulations and taxes, but there is no limit on working hours and nor are workers entitled to the same benefits as employees, such as sick pay or holidays.

‘I would like to have an employment contract but then I would earn less than what I earn now. To earn more, I must work more,’ said Natalia Matsiuk, who has been employed for four and a half years by an agency to work in one of Poland’s largest discount chain stores. Her story illustrates some of the difficulties facing Ukrainian women and how the war has changed their lives.

Natalia works 10 hours a day, six days a week as a cashier to support herself and her two teenage daughters, whom she previously entrusted to her parents, supporting them with remittances. Since the war broke out and her daughters escaped to Poland, their standard of living has declined due to the higher cost of living, rising housing costs and surging inflation.

A report last year, The Impact of Covid-19 on Ukrainian Women Migrants in Poland, found that, even before the war, those most affected by precarious work were women who took up domestic care jobs. It is a sector characterised by informality, which leaves workers without adequate labour protections. But it is a rapidly expanding area, especially with Poland’s ageing population. A quick glance at social networks addressed to Ukrainian refugees shows a flood of black-market offers of work.

Thousands of Poles opened their homes to Ukrainians seeking refuge, but activists are sounding the alarm over the possible exploitation of Ukrainians working in the domestic care sector. ‘There is no regulation concerning time of work or tasks to be carried out. Many women are hired to care for the elderly, but they are also required to clean, cook, give medicines or even injections. Our right to rest or time off is not respected,’ said Ruslana Poberezhnyk from the Domestic Workers‘ Committee.

‘Employers often expect domestic workers to be available 24 hours, seven days a week. The money we get cash in hand is little more than a minimum wage, but the majority are hired without any contracts at all,’ she said. Poberezhnyk, who originally comes from Ivano-Frankivsk in western Ukraine, has been working as a nanny for two decades. Although she has had good experiences with Polish families, she has also spent many years assisting Ukrainian migrants who have been exploited. ‘I was getting fellow workers out of trouble when their employers didn’t want to pay or took away their passports,’ she said.

Poberezhnyk and her colleagues started a union in September 2021 to fight for recognition and the rights of domestic care workers. The union, which is affiliated to the grassroots confederation Inicjatywa Pracownicza (Workers’ Initiative, or OZZ IP), meets every Sunday in downtown Warsaw. As well as providing support for domestic workers, it has been lobbying the Polish government to legalise their work and guarantee decent pay and conditions.

‘We invite refugees to join our meetings during which we explain how not to fall prey to exploitation or avoid working for minimum wages and accommodation. We make them aware of their rights because we know that they can earn their living legally,’ Poberezhnyk affirmed. 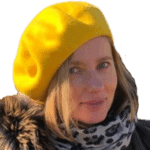 Marta Kucharska has reported for Reuters, Associated Press and Le Petit Journal de Varsovie. She has also been a researcher and freelance journalist at the Dziennik Gazeta Prawna daily.