Discussion of the EU budget brings strife between supposed net contributors and beneficiaries. Yet the picture is more complex and Europe-wide taxation offers a way out. 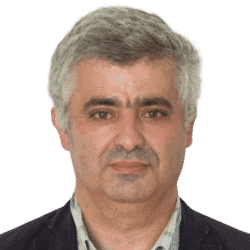 When it comes to the budget for the European Union, debate is dominated by which member states are net contributors and which net beneficiaries. This has been a barrier to furthering the European project. Net contributors want to pay less and the current programming framework, Europe 2020 (2014-20), was the first to reduce an already small EU budget.

With the sovereign-debt crisis in the euro area, Portugal, Ireland, Italy, Greece and Spain (the ‘PIIGS’) were accused of wasting European money and living beyond their means, at the expense of Germany and other net budget contributors. Yet we can think of member states’ financial balances not just in terms of their budgets but also their current accounts. In this context, net contributors are those member states which receive more in imports from the single market than they export to it; vice versa for net beneficiaries.

The figure shows average net contributions to the EU budget and the single market (net exports to the rest of the EU), as well as the sum of the two, for Germany and the PIIGS, in 2008-16. These are computed in proportion to gross national income (GNI). 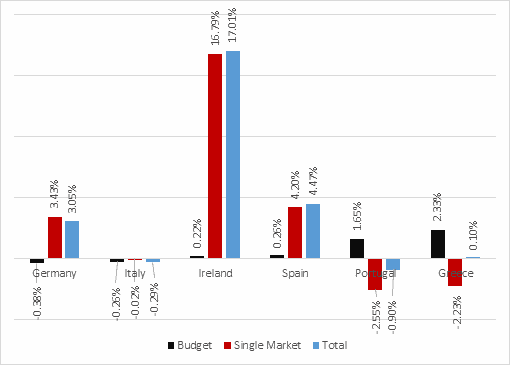 Now the situation of Germany and the several PIIGS becomes diverse rather than polarised. Regarding the EU budget, two member states are net contributors: Germany and Italy. But these net contributions are below 0.5 per cent of GNI (respectively, -0.38 and -0.26 per cent). Greece and Portugal appear as the main net beneficiaries of the budget (respectively, 2.33 and 1.65 per cent).

Concerning the EU single market, Portugal and Greece, the two member states which benefit most from the budget, are net importers and thus the main net contributors (respectively, -2.55 and -2.23 per cent). Italy, to a lesser extent, is also a net contributor to the single market (-0.02 per cent). Ireland, Spain and Germany are net beneficiaries (respectively, 16.79, 4.20 and 3.43 per cent).

These data revise the question as to who pays most into the EU and who gets most back. In a few member states, being a net contributor may imply an increasing external debt.

At the member-state level, taxes on labour and consumption have risen as those on capital have been reduced. With the international liberalisation of capital movements, member states refrain from levying taxes on financial transactions and large multinational corporations, for fear of capital flight or at least delocalisation of these companies. On the contrary, they have been lowering taxes on capital, to attract portfolio and foreign direct investment, leading to beggar-my-neighbour fiscal dumping.

If taxes on international financial transactions and multinational corporations were Europe-wide, investors and companies would no longer choose the EU member state offering the greatest tax advantages—they would pay the same tax regardless. The decision would instead be to have, or not to enjoy, access to the single market from within. Given that the EU is the second largest economy in the world, the costs associated with such a decision would be large enough to make it preferable for these investors to pay a little more tax to operate within the EU.​

Leonardo Costa has been a member of the faculty of Universidade Católica Portuguesa, Católica Porto Business School, since 1998. He has research interests in development studies, agricultural economics and natural resources, innovation and macroeconomics.