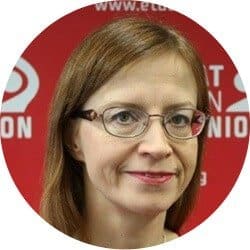 In Rome, EU leaders pledged to build a “prosperous and sustainable Europe” where “economies converge”. Fine words – but empty ones without more investment, especially in Member States with weaker economies. That is why the European Trade Union Confederation is urging the setting up of a European Treasury for public investment.

The ETUC has been calling for higher public investment for years. But instead, the Stability and Growth Pact (SGP) has stifled spending, while post-crisis austerity has penalised countries in greatest need. Economists have already pointed out that struggling economies will suffocate – and support for Eurozone membership evaporate – without lower borrowing costs and scope for investment. Yet political leaders have embarked on ideologically motivated, all-round austerity policies, with damaging consequences on growth and employment and catastrophic social impacts. As a first step, the SGP must now be amended to offer more flexibility for investment.

In its 2017 economic policy recommendations for the Eurozone, the European Commission called for a ‘positive’ fiscal stance, in other words, fiscal expansion of up to 0.5% of GDP, equivalent to around €50 billion. Expansionary policies are of paramount importance, especially in Member States hit hardest by the crisis, in order to rekindle growth. Yet national plans in the Member States for the year to come, under EU fiscal rules, indicate a neutral fiscal stance. A European Treasury would allow for a positive fiscal stance without contravening these rules. Graph 1 below highlights the divergence between government plans and Commission recommendations. 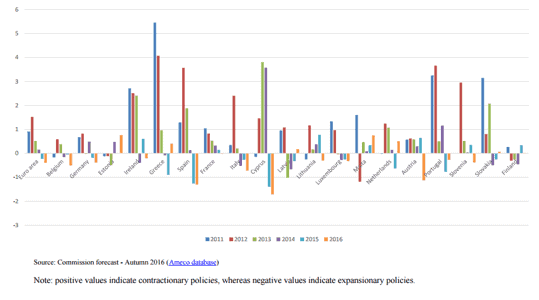 The Five Presidents’ Report on Completing the Economic and Monetary Union, published in June 2015, recognised that EMU decisions will increasingly need to be made jointly, and suggested that a Euro-area Treasury could be the place for such collective decision-making.

A European Treasury would enable Member States to decide together on a global level of public investment across the EU – for example 3% of GDP. It would issue securities to finance debt at European level. Removing public capital expenditure from deficits and financing it through the Treasury would allow Member States to increase their budget flexibility while maintaining current spending and respecting the rules of the Stability and Growth Pact.

It would work like this: the European Treasury would borrow money on the capital market and lend it to governments at low rates of interest. Member States would retain control over their own investment programmes and pay back the money later. The European Treasury would cover all new public investment, while national budgets would fund only current expenditure. Governments could therefore avoid slashing public spending, as they were obliged to do under austerity, and could lay foundations for their future. And higher public investment would aim as well to attract more private funding.

No debt mutualisation would take place. The SGP would continue to apply to current spending, and the Treasury would withhold grant payments if countries failed to meet budget targets, thus giving governments a strong incentive for sound policies.

To create new jobs and relaunch sustainable growth, Europe needs much higher public investment in schools, healthcare and social services, research and development, transport and infrastructure. This is all the more necessary at times when jobs are being lost due to economic recession and political irresponsibility, and growing inequalities are reducing workers’ self-sufficiency.

The ETUC was pleased to see the launch of Jean-Claude Juncker’s Investment Plan for Europe. But it was too timid, the funding too inadequate, and it relied too heavily on private sources, resulting in investment going to sectors and regions that were already better off. Funds should immediately be retargeted towards communities and industries in real need. On the basis of past experience, trade unions are sceptical about the benefits of public-private partnerships, especially in the provision of vital services.

Public investment is vital to promote economic growth and jobs because the private sector is still risk-averse, and too often focused on shareholder value and short-termism rather than public interest, standing in the way of investments that are beneficial in the long-term but may not yield immediate rewards. Public funding is needed both to boost confidence and to build sustainable and environmentally friendly economies that will serve the needs of future generations.

Yet public investment in the EU has been falling since 2009. By 2013, some estimated an additional €230-€370 billion was needed to fill the hole. Even those Member States that have extra fiscal capacity have been reluctant to invest in boosting cohesion or kick-starting growth elsewhere in the EU. In some Member States, the stock of public capital is falling, leading to a deterioration in schools, roads and other vital infrastructures.

The European Treasury we propose would not be limited to the Eurozone and would not exclude any Member State.

Changing from high-interest national debt to low-interest debt would mean significant budget relief for Member States under pressure, while countries with more financial leeway would be able to borrow extra on their national budgets, if they wished.

We know that the European Commission is due to put forward further proposals for deepening Economic and Monetary Union in May. These must be designed for the benefit of Europe and Europeans, fusing interests in the service of the whole population. Putting aside the uncertainty generated by its ‘five scenarios’ for the future of Europe, the Commission must now have the courage to pursue the deeper integration and cohesion that we believe is the only way to preserve European unity. EU leaders will need to deliver on the commitments they made in Rome.

Katja Lehto-Komulainen is deputy general secretary of the European Trade Union Confederation. She was previously head of international affairs at the Central Organisation of Finnish Trade Unions (SAK).