A while ago I participated in a TV debate on Greece (German speakers can follow this link). One of the points of contention was whether investment in Greece has been structurally weak, hampered by overregulation or corruption – in short: it’s the supply side, stupid – or whether the country’s economic problems are primarily derived from macroeconomic factors located on the demand side.

The supply and the demand side are both likely to be important for economic outcomes, of course. Clear evidence of structural weaknesses is provided in this article by Benedikt Herrmann and Alexander Kritikos (one of the other panellists). The question is, however, whether such weaknesses can plausibly explain the observed patterns of investment in Greece. Here I present some data (the source is the AMECO database) comparing Greece with the euro area average and Germany over the period since 2000 (when Greece joined EMU).

There are a number of ways to tell the story, but let’s start with the net capital stock. This is the sum of investments minus depreciation over time, taking 2000 as the starting point. We do not see structural weaknesses in Greece holding back the development of the capital stock. It grew rather more rapidly than the euro area average until the crisis, expanding by almost a quarter, and far faster than in Germany (where it started from a higher absolute level). Since the crisis the capital stock has shrunk, indicating that new investment has not kept up with depreciation. 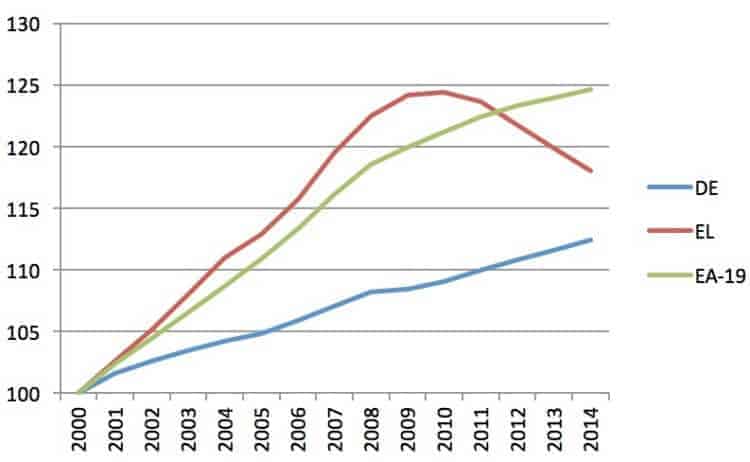 This picture is confirmed when looking at the volume of new investment. It rose in Greece by almost half between 2000 and 2007, only to subsequently collapse to half its initial value. German investment was very weak in the early 2000s – during which it was performing the structural reforms known as the Hartz reforms – and has been gradually edging up since the crisis. 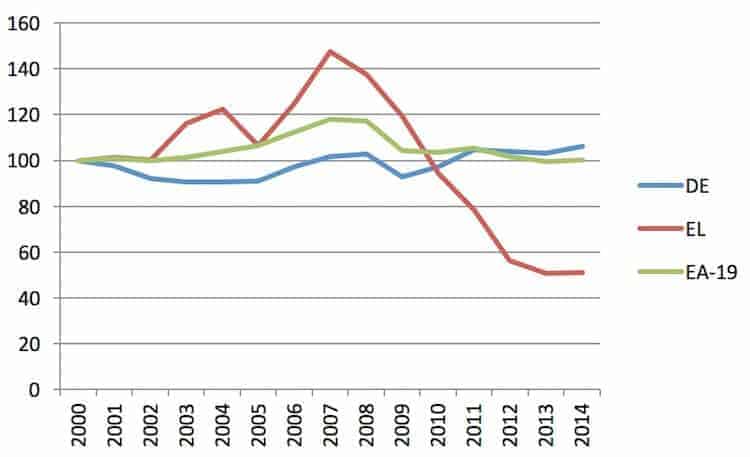 So we observe a very pronounced cyclical pattern which is hard to square with the claim that an important driver of investment is structural supply-side features. The Herrmann/Kritikos article claims that in Greece investment had been drowned out by a reckless consumption binge. The article refers to the very high share of consumption in GDP. While there is some truth in this, the high consumption share is largely a reflection of the large current account deficit. If we look – which is more intuitive – directly at investment as a share of GDP we see that until 2007 the investment share was some 3-4 percentage points of GDP higher in Greece than in frugal Germany. Only after the crisis hit did the investment share collapse. This is hardly surprising given shrinking product demand from workers who had been laid off or seen their pay packets docked, and doubts about Greece’s future within the monetary union. It seems hard to sustain the claim that structural features like excessive bureaucracy and corruption are important drivers. 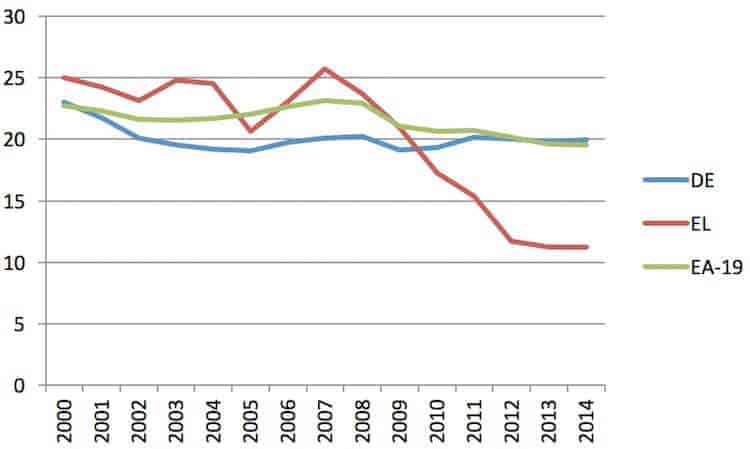 Maybe these investment trends are being driven by population (including migration) trends, overriding the impacts of structural and institutional features? No. Population developments in Greece and Germany are more or less indistinguishable, are not shown here, and can be summed up in one word: stagnation.

A final argumentative bolt-hole would be that the investment concept used here – fixed capital formation – is too broad. It lumps together “unproductive” investment, especially housing, with “productive” investment in plant and machinery. In short: Greece merely had a housing bubble. If we separate the two types we see that the data are not really supportive, however. The GDP shares of investment in dwellings and in equipment were initially very similar. Up to the crisis housing investment grew slightly faster, and then fell off earlier and more dramatically than was the case with equipment. Real estate did play a role in rather robust investment, but it was far from the only driver. Notably, until 2010 equipment investment in Greece was almost always higher as a proportion of GDP than in Germany. The graphs also shows the persistently weak housebuilding (following the post-unification boom), which is an important part of the overall investment weakness in the country (see also here).

Investment in dwellings and equipment, % GDP 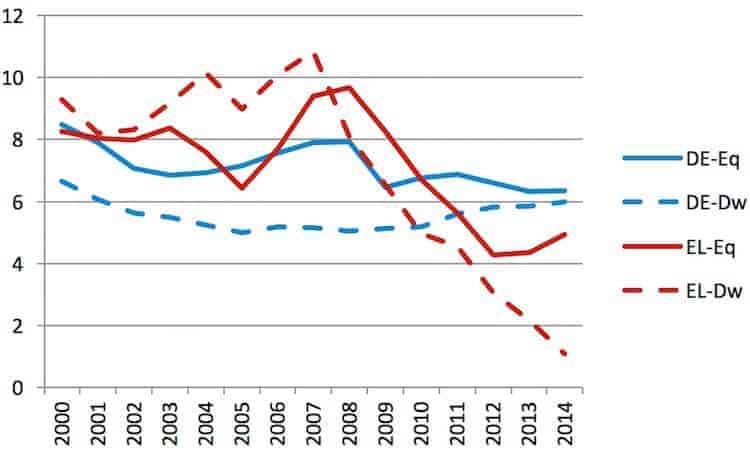 Structural, supply-side features are undoubtedly important for economic and employment performance. But it seems very clear from the data, and given the well-known and oft-decried resilience of structural features to change, that what is really needed to explain investment trends in Greece is a macroeconomic account of the boom and bust cycle. The prime policy failures in Greece, then, relate to the failure to lean against the pro-cyclical wind of expansion and then bust that derived from Greece’s position – and that of countries such as Spain and Ireland – in the euro area. And, of course, we need to reflect on and remedy the design faults of the architecture of EMU.

Some conclusions for the current stand-off

What can we then say about the need for structural reforms? A full evaluation requires, of course, a detailed and patient analysis. The Herrmann/Kritikos article cited earlier sets out a vision of a path to stronger supply side institutions. Many of these proposals, if they are achievable, are eminently sensible in the longer run. But we need to recall the very difficult, indeed dangerous situation in which both Greece and the euro area find themselves.  As a useful first pass at the “stylised facts” we can take the labour market reforms counted by the European Commission (in its labref database). If, as a first approximation, we simply weight each reform equally. We get the following picture. 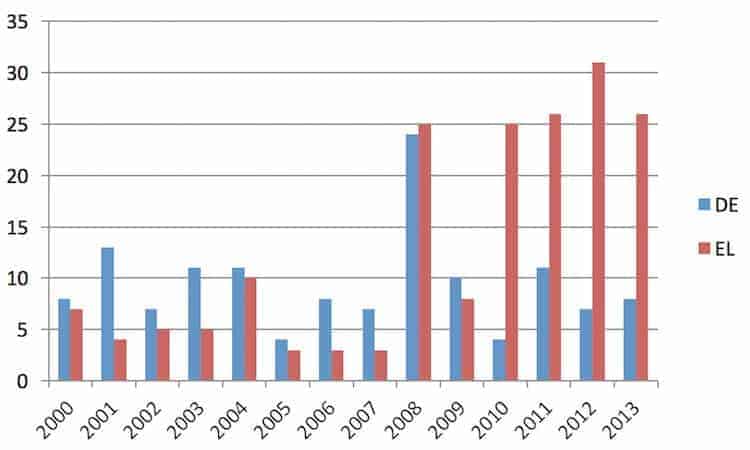 First, it is clear that complaints that the Greek authorities have been sitting on their hands since the crisis lack foundation. Beginning in 2008 (with a brief hiatus the following year) a very substantial number of reforms was accomplished, consistently higher than the number achieved in any year in Germany.

Second, if one were to naively try to find a causal link between structural reforms and investment, it would appear that implementing reforms is actually bad for investment. A much more plausible link runs the other way, of course. Bad economic performance, as reflected in weak investment, creates political pressure for reforms; this is most obvious in the case of Greece under the troika, but also applied to Germany in the early 2000s.

Third, if one does want to construe a relationship between reform efforts and (positive) economic performance – for example with reference to the Hartz reforms – it is clear that the time lags involved are very substantial. Whether these effects occur and if so through what channels is a long and complex debate, which I do want to enter in-depth here; see for instance here and here.

But what must be clear in the current context is that such lags are very relevant when analysing the bargaining process between Greece and its creditors. Reforms, at least intelligent reforms, will indeed be important for raising long-term living standards in Greece. But, as two recent analyses, one conducted and one commissioned by the IMK show, what is vital in the short and medium run is to ease the crushing burden of fiscal austerity and address the social crisis that threatens to tear the country’s social and economic fabric irreparably. Above all the Damocles Sword of possible ejection from the euro area needs to be removed.

These steps will permit a recovery in domestic investment, preferably bolstered by externally financed public projects under the Juncker Plan or other (better) schemes. It makes no sense – at least not if the objective is genuinely to see a return to prosperity in Greece – to make easing austerity conditional on implementing structural reforms, which cannot even be sensibly drafted in the limited time available. If the European authorities have faith that the structural reforms already implemented at the behest of the Troika, which as we have seen in the case of the labour market have been very substantial, will have beneficial effects, then the conditions should be put into place to allow them to bear fruit.