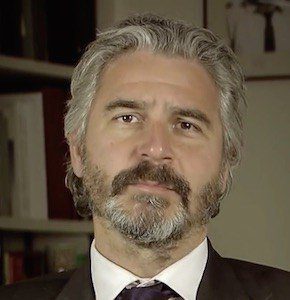 1. Europe enters philosophy in the context of a distinctively philosophical conception of human history.

One might wonder what philosophy, as an a priori inquiry, can possibly have to say about history, which is, one might imagine, everywhere run through with contingency and chance.

What philosophy brings to history is shaped by the anthropology that has guided the course of its own history: the anthropology of the ancient Greek world, where “Man” is defined as the zoon logon echon, and the anthropology of Christianity, where “Man” is defined as the ens creatum that is made in the image of God. The first definition says that Man is the animal with the capacity for grasping the “logos”, a polysemic word that was fatefully translated in the Latin of the Roman Republic as “ratio”, and in this way the Greek definition comes down to us as the conception of Man as the rational animal. The Christian definition does not displace the Greek, but the latter comes to inform the Christian theomorphic understanding of Man’s distinction from the rest of creation.

What does this philosophical anthropology have to do with history? First of all it brings with it a conception of history as the history of Man as such, and not just the history of human beings in this or that region of the global totality. What is the history of Man? With the classical anthropology in view, we can say it is the movement in time of the emancipation and progress of rational animality from a primitive origin to a civilised end. Within Greek conceptuality, this movement is understood as teleological. Teleology is the philosophical doctrine of design or purpose in nature. The idea is that the proper development of natural characteristics moves towards a definite end, and that this is as true of Man as any other part of nature. In Christianity the idea of the history of Man is drawn into an eschatological horizon. That is, the history of Man is inscribed within the conceptuality of a final end time. Starting with the Fall, history is conceived as having a Fall/Redemption structure. Covenant theology understands the whole of human history after the Fall as unifying under the provisions of the covenant of redemption.

So we have this uniquely philosophical anthropology arising out of the appropriation of Greek conceptual resources into a Christian creationist conception, a unique combination of Greek ontology and Christian theology. “Onto-theology” is, one might say, the fundamental heritage of philosophy and its understanding of Man and history. But, perhaps, not only of that. What if, with Emmanuel Levinas, we were to affirm too that the onto-theological heritage is not just fundamental to philosophy but to Europe too? What if, as Levinas puts it, “Europe is the Bible and the Greeks.” Europe, in history, discovers, opens and elaborates itself as belonging to universal history, the history of Man as Man.

2. For philosophy, the history of Europe unfolds within universal history.

On this understanding philosophy is not something that happened to emerge or develop in a geographically European space. No, Europe itself only emerges as such within a history determined essentially by philosophy. As Heidegger puts it: “philosophia determines the innermost basic feature of our European history. The often heard expression ‘European philosophy’ is, in truth, a tautology.” So we have a Greek “event”: the emergence of philosophy. And this is followed by another decisive “event”: the appropriation of Greek conceptual resources by Christian creationism. However, these events do not simply mark the fundamental “sources” of Europe: they guide and rule the European understanding of Man, even today. The fundamental staging of Europe’s own history is then understood as developing along a Greco-Romano-Germano-European axis conceived as inseparable from the movement of the history of Man as such.

The fundamental staging of Europe’s own history is understood as inseparable from the movement of the history of Man as such.

3. Philosophical history of the world (universal history) has Europe at the head.

On this conception, the particularity of Europe is inseparable from its relation to and interest in the universal: its interest in and movement towards a universal cosmopolitan existence for all humanity. Europe emerges as a fundamentally missionary culture – colonial for example – specialising in the universal.

4. Philosophical history of the world is also a discourse of Europe’s modernity.

The Greek opening of philosophy (and thence of science) is conceived as the origin of a movement that is inseparable from a development in world history in which Man breaks away from his primitive and traditional ways – ways dominated by myth, magic and superstition – and into a properly “modern” Enlightened and civilised culture. This modern culture is not just a regional human culture among others but is universally fitting for all humanity (as rational animality): a culture of reason, science and technology, and the secular, democratic and egalitarian political order that belongs with it.

5. The discourse of Europe’s modernity is… falling apart.

The self-understanding that belongs to the discourse of Europe’s modernity seems to be approaching what is really its own exhaustion. In view of a slow movement in Europe’s own history – within the actual history of Europe in the times of science, in the time after Copernicus and after Darwin – we are witnessing today something a long time coming, nothing less than a new mutation in the actual history of the world: the end (exhaustion) of a certain determined concept of history (as a movement towards a final end of history), and that because we seem also to be reaching the end (exhaustion) of a certain determined concept of man (as theomorphic and rational animality). Perhaps the time of Europe of the Bible and the Greeks is past. Will it belong to philosophy to give it a future?

Simon Glendinning is Professor of European Philosophy at the European Institute of the London School of Economics and Political Science (LSE).