Too few countries have ratified the ILO convention on domestic work. Too many don’t see the need.

As soon as they are old enough to hold a plate or turn a spigot, every person on the planet does some type of housework or another. Man or woman, rich or poor, young or old—everyone takes turns with other household members to do the dishes, make toast or water the plants. Every single human being has had someone change their nappies and comb their hair.

The tasks we carry out in our homes represent work that is absolutely vital in making sure we are all fed, clothed and washed—that we are kept alive—yet they are also taken for granted. Why are there not more conversations about housework? And why are people who do it professionally for a living some of the most precarious, at-risk workers in the world?

The International Labour Organization (ILO) estimates that there are at least 75 million domestic workers worldwide. The number is uncertain, as this work is not normally included in national accounts.

Nevertheless, the sector is estimated to employ as many as one in three women employees in the Arab states, one in five in Latin America and the Caribbean, and one in 12 worldwide. While there are men too who perform domestic work, women are overwhelmingly represented.

Domestic work is also not normally included in labour laws in many national jurisdictions. Many of the norms and entitlements regular employees expect of their employers—receiving a wage or salary at fixed dates, the weekend or days off, having the freedom to come and go at the workplace—thus do not always apply.

There are people who have worked a whole year without receiving a salary. Others are not allowed to leave their employer’s household compound for weeks, even months, at a time. These may be exceptional cases but why do they happen in the 21st century?

In 2011, the Convention concerning Decent Work for Domestic Workers (C189) was adopted at the ILO’s 100th annual conference. This standard-setting instrument requires that a domestic worker be treated like any other, enjoying the same employment norms as workers in the formal economy.

To date, however, only 35 countries have ratified C189. Latin America and the Caribbean comprise half of the signatories (18), while all of Asia, from Turkey to Japan, has only one (the Philippines). Not coincidentally, Asia also employs about 40 per cent of domestic workers globally.
In the deliberations over C189, delegates from member states, worker groups and employer organisations debated two crucial aspects of domestic work. One was working time.

Domestic work is assumed by many to be so specialised and specific that it is beyond regulation. Should an infant or elderly invalid require attention at 2am, the worker must be on stand-by: the child may need put back to sleep; the elderly person may need help with a toilet. The need for such labour is assumed to be so essential that limits to working time cannot—should not—be set.

The other issue was the household as a place of work. In response to suggestions for labour inspections, concerns were expressed about its ‘inviolability’. Should the state be allowed to intervene in the ‘private’ realm?

Both exceptions to employment norms—the presumptions of an endless and boundless supply of domestic labour and the sanctity of the household—are premised on gendered conceptions of the nature of work and the public-private divide. If cooking, cleaning and caring are so essential that they cannot be regulated by limits to working time, then surely domestic work deserves a premium rather than being so badly paid? And are the people who perform this work treated so poorly in part because they are deemed beyond the reach of the public arena, its laws and its politics?

Throughout the 20th century, employment meant showing up at the workplace at nine o’clock and punching out at five, give or take. It is easy to forget that over a hundred years ago, people—including children—worked twice as long in factories, powering the industrial age.

In this century, work norms are again changing. In some ways, they increasingly resemble domestic work. There are more ‘flexible’ hours and work arrangements. Some may be servicing global markets, and may need to be up at 1am to hold meetings with clients or co-workers in other time zones.

During the pandemic, others came to ‘simulate’ the experience of many domestic workers. The household became the workplace and the boundaries between work and life were blurred. Working mothers with young children who could not go to school found that previously distinct aspects of their lives ‘collapsed’ into a single space.

The pandemic clearly demonstrated how modern economies rely on the tenuous balance of the gendered division of labour in the household. If the economy of the previous century was premised on the wage-earner surrendering eight continuous hours of his life for the ‘use’ of a firm or a factory, what form would working time take in this one? And how could caring labour be formalised and incorporated in the economy?

Perhaps some answers can be found in the solutions brought forth by the problems posed by domestic work. These imply transcending the limits of the model of the male wage-earner, with no caring responsibilities—and recognising domestic work as work like any other. 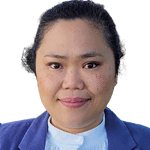 Dr Liberty Chee is a Filipino migration scholar based in Europe. She is a Marie Sklodowska-Curie fellow at Ca' Foscari University in Venice. Her current research is on the co-production of knowledge about domestic work in the context of the International Labour Organization.