A far more radical answer is needed than corporations tacking on environmental and social goals.

‘Environmental and social governance’ (ESG) has become a mainstream idea in much of the investment world. It refers to screening techniques through which pension and mutual funds apply environmental, social and governance considerations to potential investment targets.

In a capitalist economy and political system focused on the wellbeing of its middle class, the presumption is that positive change can come about by mobilising capital behind such ethical causes. A well-functioning economy is deemed to require a reliable natural environment as a foundation for societal wellbeing, which it is understood capitalism can act prudentially to maintain.

Employee pension funds set up by governments, corporations and trade unions increasingly utilise ESG. Many of them have signed up to the United Nations Principles of Responsible Investment, with which nearly $4 trillion in assets under management worldwide are now nominally associated.

When nearly 20 years ago I co-founded the UNPRI, and chaired the expert group that drafted its principles, I believed in this underlying premise. That belief is however becoming harder and harder to sustain, for three reasons.

First, 21st-century financial capitalism prioritises capital over labour and has no checks on the increasing polarisation of wealth and income. The rich get obscenely richer, the ‘middle class’ live month to month with diminishing prospects and the poor survive hand to mouth. Inequality increases year after year with a handful of Big Tech entrepreneurs determining how life is for everybody else.

Such billionaires increasingly control the political sphere. Democracy as we experienced it in the second half of the 20th century is in many countries morphing into plutocracy. In the United States, the classic ‘checks and balances’ are collapsing in the face of money-driven electoral politics and the lobbying power of the oil, gas, coal and armaments industries. The US Supreme Court, dominated by extreme right-wing political appointments, has set back human rights and environmental protection by at least a generation.

If the US is now arguably a democracy only in form, one can hope that European social democracy and its political economy will continue to provide a viable alternative and show how democratic capitalism is possible. But one wonders.

Secondly, even though many well-meaning people in the investment business are sympathetic to greening the economy—even to the idea of a carbon-free world of social justice—ESG is no substitute for hard political pressure on governments to enact policies and regulations to prevent climate change becoming climate catastrophe. Pretending ESG can do the job politics must do is a diversion.

Most ESG funds simply exchange money for stocks or stocks for money, in trades between investors, without really ‘investing in companies’. Efforts to engage relevant chief executives or chief financial officers become a sideshow to how their business operates.

Most ESG funds, moreover, maintain significant exposure to the oil and gas industry. Banks continue to lend for fossil-fuel energy production and insurers insure it—Goldman Sachs, Blackrock, JP Morgan and Citi are not withdrawing their financial support and nor are their lobbyists urging members of Congress to go for a Green New Deal. European banks are no different.

Finally, when push comes to shove, capital favours short-term accumulation and avoids redlining industries whose products, business models and compensation structures go against the environment and social justice. The metaverse, which Big Tech is counting on to generate its next megaprofits, is a form of escapism from the real world and its problems and looks to become a new ‘opium for the masses’—a way to avoid thinking about crises, conflicts and deadly mass migrations.

That our political system is unwilling to replace our energy infrastructure entirely with alternative sources is tragic. Without this, ESG funds are at best a feel-good, marginal, symbolic contribution—in the right direction but nowhere near adequate to the challenge.

The political and military crisis in Ukraine shows this clearly. Instead of going for an epoch-making wind and solar ramp-up, along with major energy-efficiency infrastructure investments in mass transport and housing, governments, banks and investors are increasing oil and gas production and exploration as much as they can to make up for sanctioned Russian oil and gas—when what we most need is ‘sanctions’ against all carbon-based energy, regardless of origin.

Russia is being held in check. But the advance towards climate catastrophe—the true existential threat—is not. The political system must act against global heating with the same urgency and conviction with which NATO has acted towards Ukraine. 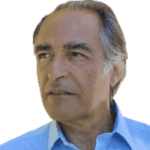