Austerity is contagious: The case of France

France is finding itself between a rock and a hard place. On the one hand, with 54% of companies reporting in the third quarter 2014 that they find activity constrained by a lack of customers, the main problem is clearly on the side of demand. On the other hand, its government has clearly abdicated from using fiscal policy to support aggregate demand and is in fact trying to do the opposite by further cutting public expenditure.

Here, it’s not just the pressure from the Commission and the Stability Pact that is pushing France further down the road of austerity. It is also and most importantly the fact that France cannot risk not to keep up with the pace of austerity as pursued by its trade partners.

The latter has to do with the fact that the deficit and wage cuts in Spain, Italy and Portugal depress domestic demand in these countries. However, their domestic demand constitutes at the same time the export markets for goods and services made in France. As a result, French exports to these countries go down, thereby also worsening the balance of external trade of France. The graphs below document this in detail and show how, in each case, exports from France have fallen over the past years and this in a systematic and continuous way. 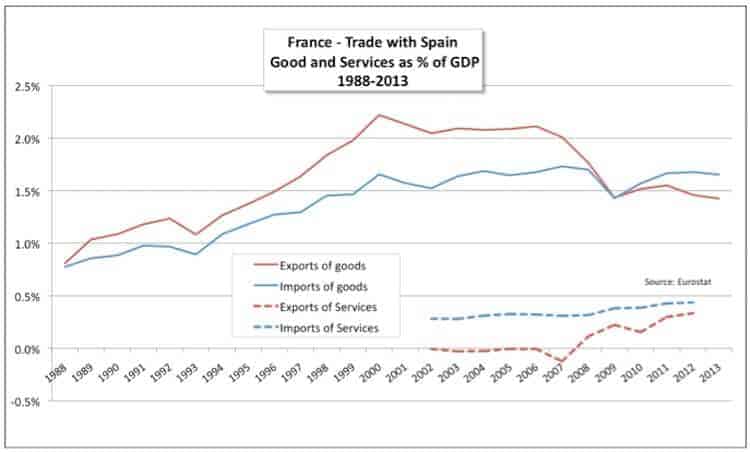 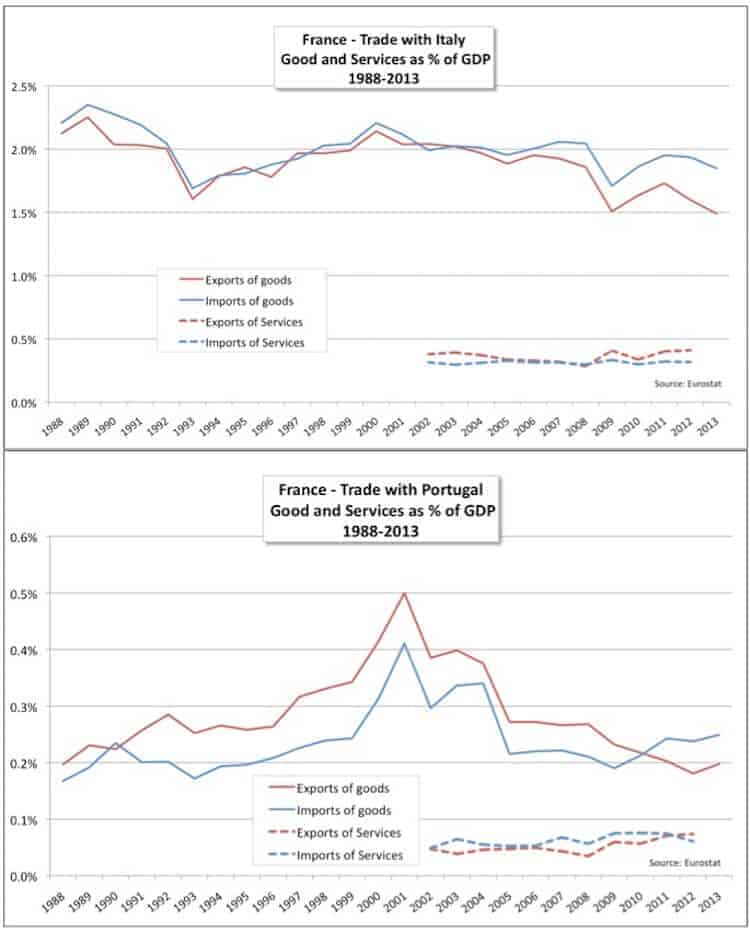 In fact, the wider picture is that France is now the only remaining member of the monetary union still registering a significant current account deficit, now reaching 38 billion or 2% of GDP.

Why is this a problem? The key concern is that, by having annual deficits in external trade, France is also running up its external debt position and this year after year. However, the Euro crisis has shown that the latter is not sustainable. This is especially not sustainable for members of the single currency who are, by definition, issuing debt in a currency that is not managed by themselves but by the European Central Bank. Sooner or later, and this is what did happen with Greece in 2010, financial markets will pick up on this, go into a ‘financial market strike’ and refuse further finance.

The bottom line is that austerity policy is contagious. At the risk of being singled out by financial markets because of rising external deficits, a country cannot afford to stay outside the European austerity squad completely. If surrounding economies are dragging down French export markets and exports, France is sooner or later forced to “return the favour”, squeeze its own domestic demand and in turn weaken the export market perspectives for the economies and trade partners that surround France. If not, its external deficit or, as the Commission likes to call it, its external ‘imbalance’, will increase further and become ‘excessive’.

It is against this background that French ministers Michel Sapin and Emmanuel Macron, when visiting their counterparts in Berlin recently, launched a proposal to match the 50 billion of public and social expenditure cuts that are planned in France for the next three years with a corresponding amount of new investments to be launched in Germany. The philosophy behind it is to reach a sort of European equilibrium, with cuts in aggregate demand in one part of Europe (France) being offset by a demand stimulus in another part (Germany).

The proposal certainly makes sense in terms of political strategy since it clearly puts the responsibility of internal euro adjustment also on the surplus countries, in other words on those countries that actually have the means and the opportunity to launch aggregate demand.

In economic terms, however, the proposal has one major flaw. Even if European and Euro Area member states mainly trade with each other, this intra-European trade does not function like perfectly communicating barrels. It is not correct to assume that taking away one unit of aggregate demand in France can be neatly compensated by adding another unit of demand in Germany.

This becomes clear when looking at the actual importance of trade flows between France and Germany. As is shown in the next graph, exports of goods from France to Germany only account for 4% of French GDP (5% of GDP if goods and services exports are taken together).

This presents a major problem for the Sapin/Macron proposal since it implies that their equation does not really add up. With domestic demand supporting more than 80% of French GDP and German demand for imports made in France limited to 5% of French GDP, the idea that an increase of the latter can offset a cut in the former is an illusion. Unless Germany boosts its demand by a big multiple of French expenditure cuts, the net overall effect of such an operation will be hugely negative for the French economy. 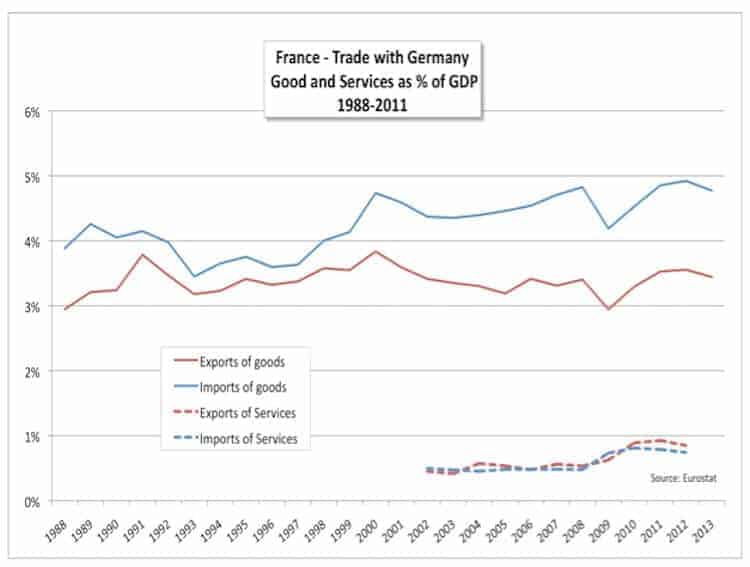 In a paper from 2013, DG ECFIN formalises this finding further. This paper was, by the way, at the time reported in public media as DG ECFIN delivering itself the evidence that coordinated fiscal austerity across Europe was very detrimental for short term growth. An additional simulation carried out in the paper was to simulate the effect on the rest of Europe of a two year 2% of GDP demand injection carried out in the surplus countries of Germany, Austria and the Netherlands.

It turns out that, as could be expected on the basis of the graph above that such a 2% of GDP demand stimulus by the surplus countries would increase the level of economic activity in the rest of the Euro Area by 0,25% of their GDP only. The proposal of cutting demand and wages in one set of member states while at the same time boosting demand in the surplus member state(s) does of course help somewhat to alleviate some of the tensions but it is not the ‘silver bullet’ solution policy makers are looking for to address the dismal perspective of prolonged stagnation in big parts of the Euro Area.

What hen should be done? Surplus countries, and Germany in particular with its public investment rates at an all time low, should certainly boost investment. This, however, should be part of a European wide investment effort, with finance for this investment being mobilized and channelled through European instruments. To start rebalancing the Euro Area, we need a European investment plan.