In June 2017, the Eurogroup of 19 EU finance ministers agreed to pay out the third tranche of €8.5 billion from the Greek bailout package. In total, Greece has received about €300bn from the rescue package until now. But did this incredibly high amount of money reach the Greek population? Did its living conditions improve? […]

Economic globalisation has accelerated enormously. With the advances in information technology and international trade policies, it now permeates almost every sector of the economy as well as our whole way of life. At the same time, tariffs and technical trade barriers have been massively dismantled through wide-ranging market liberalisation, and worldwide competition has been ratcheted […]

The Greek elections have thrown European politics into turmoil. How do you assess the election result? The majority of Greek voters have delivered a No to crisis management through austerity which has led the country into a social catastrophe. The massive spending cuts have driven the country into the deepest recession and, at the same […] 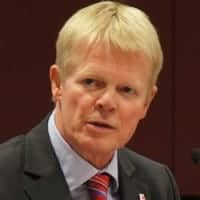 Joseph Stiglitz, who won the Nobel Prize in 2001 for his work on how markets work inefficiently was once asked about his opinion on austerity measures. “It reminds me of medieval medicine,” he said. “It is like blood-letting, where you took blood out of a patient because the theory was that there were bad tumours. And very often, […]