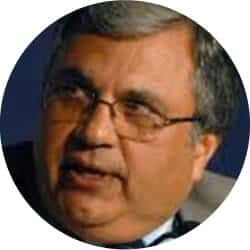 The British public is coming to realise as the Brexit negotiations unfold that the entire referendum campaign was misleading. It was a deliberate attempt by the Brexit camp to manipulate mendaciously — by repeating a series of untruths — popular understanding of what the UK’s relationship with the EU is about.

The economic case for Brexit is based on false, damagingly nationalistic presumptions and premises. Contrary to what Brexiteers suggest, there is no best way to maximise the economic benefits of leaving. Brexit is a ‘lose-lose’ proposition for Britain and the EU, when seen from any perspective, other than the rose-tinted one of reviving the UK’s much-vaunted (but illusory) genius for independent economic success through freer trade.

When Britain traded in a world in which it set all the rules, harming other countries and colonies (like India, where it destroyed India’s textile industries, through its UK-centric ‘free trade’ policies; not to mention the damage it did to China by access to its market through militarily enforced ‘free trade’ in opium), it ‘succeeded’. But it was an odd success. After WW2 the UK traded in a different kind of world, where it no longer set the rules. The US did — much to the world’s benefit. Then, Britain was a self-acknowledged failure as the ‘sick man of Europe’.

Look below at the contrast between: (a) Britain’s record of economic performance from the 1950s up to 1973, when it was outside the EU; and (b) its record from 1974-2015 after it became a member. It failed miserably in the first period (apart from the blip of immediate post-war reconstruction) but performed remarkably well in the second. The difference is chalk and cheese. 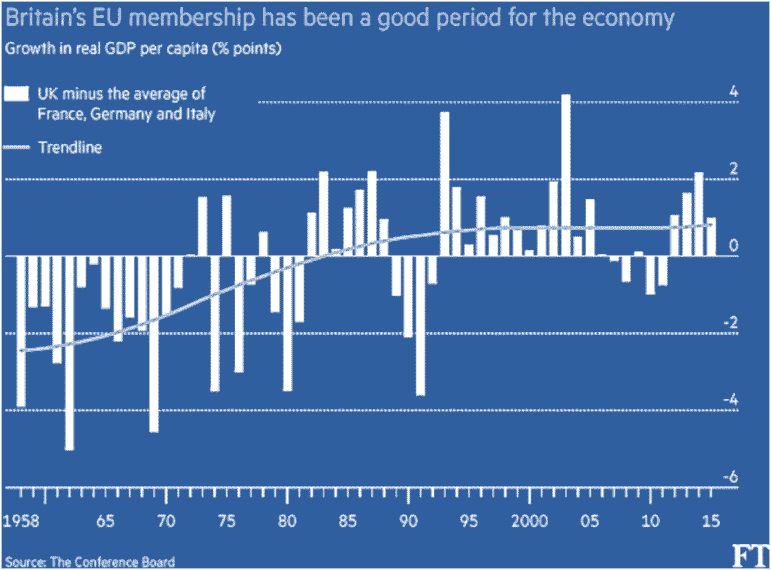 In round figures, the British contribution to the EU budget is a net £10 billion out of total public expenditure of around £750 billion. That is less than 1.4% — or in the realm of errors and omissions. The UK government wastes more than that through mismanagement in several key departments every year.

The net cost is therefore infinitesimal compared to the enormous amount that Britain gains by being a member, in terms of output growth, trade, security and cultural-social-political benefits. The British public is just beginning to realise that as an ill-prepared government that hasn’t done sufficient homework comes to terms with, and exposes the public to, several harsh realities that neither had contemplated before.

Besides, the UK’s gross contribution to the EU budget is less than £22 billion, or under 3% of total British public expenditure. That highlights the fact that Britain has total sovereignty over 97% of what its spends on health, education, pensions, welfare, defence, foreign aid and debt service — areas in which the EU has little or no influence over the UK.

Brexiters claim that the UK is constrained by the EU’s ‘protectionism’. But the UK benefits from it by having privileged access to a market of over 460 million consumers, which is over US$18 trillion in size – larger than the US or China. Through the EU, the UK has workable and profitable trade arrangements with at least 60 other non-EU countries. They account for over 90% of world trade excluding the EU.

If the UK were as constrained by being in the EU as Brexiters believe, why is it that the US, China, India, Korea, Japan, Taiwan, Canada, Australia, Singapore, Saudi Arabia and the Gulf countries, are already its largest trading partners outside the EU? The EU accounts for 46% of the UK’s total trade. These other ten trading partners account for nearly 50%. How much more does the UK think it could get out of Free Trade Agreements with them?

There are essentially four false arguments that Brexiters repeat ad nauseam to make their case – i.e. that by leaving the EU, the UK can: (a) determine its own laws and reassert sovereignty; (b) do its own trade deals; (c) escape EU protectionism; and (d) set its own tariffs. That is just delusional rhetoric. The UK would come out the loser, especially in trade deals with the US, China and India which will have the greater advantage.

A trade deal with the US will result in the British public eating chlorinated chicken and absorbing many of America’s sub-EU-standard regulations and safety provisions, not to mention introducing a greater degree of privatisation in its over-hyped health service.

With China and India, it will import more of their manufactures and agricultural produce (where they have a comparative advantage) but the UK will not be allowed to export freely its financial and business services (where it has a comparative advantage). China and India would use their ‘developing country’ status in the WTO to block reciprocal deals. The UK might well come out much worse than now.

Does anyone in the UK really think that its government knows how to negotiate a better trade deal with non-EU countries than the EU? It does not even have enough experienced, knowledgeable trade negotiators to begin such negotiations. The EU has them all, in this part of the world. Such trade deals would take much longer to close than the British public has been led to believe.

The UK can pass its own laws but it does so now in a way compatible with the sovereignty it voluntarily shares with the other 27 EU members. Pooled sovereignty is not the same as lost or surrendered sovereignty. It makes Britain stronger, as an influential global voice, using the much larger throw-weight of the EU as a bloc.

That matters to other strategic world powers such as the US, Japan, China, India and Russia, as well as to trading partners and investors, much more than Britain will matter when it becomes an isolated, average, medium-sized economy. The UK is now the world’s 12th largest economy if measured using the right metric of PPP exchange rates and not the 5th largest (when measured by misleading nominal exchange rates) as Brexiteers keep insisting.

In short, Brexit will not result in any net economic benefit to Britain. It will result in a significant net loss which the bumbling UK government will simply have to do its best to minimise. That is the unfortunate task the current government has – i.e. not to negotiate the best Brexit deal for Britain, but to come up with the ‘least worst’ as economists like to say.

So, it is time for the Brexiteers to cease indulging in an unadulterated folly that will result in considerable self-harm to the UK.  Those at the forefront of the Brexit referendum debate had the sense to realise that Britain would indeed harm itself by leaving the EU early on during the campaign. But they lied about that.

That is when they switched the argument for Brexit from economics to immigration, probably secure in the knowledge that appealing to crude xenophobia would win over any appeal to common sense and real self-interest.