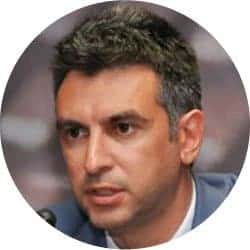 The main feature of the successive economic adjustment programs implemented in Greece in the period 2010-2018 concerning industrial relations was a radical decentralization of the collective bargaining system and the government setting (more explicitly: the reduction) of national minimum wages. Today, despite the almost complete decentralization of that system, the performance of domestic labour markets fails to meet the policy objectives pursued. The dynamics of employment growth and the reduction of unemployment are weak. Wages have fallen to extremely low levels, contributing to the intensification of in-work poverty, while productivity gains have been marginal.

From governmental corporatism to radical decentralization

Long before the economic crisis, the institutional framework of the Greek labour market was dominated by active state intervention. This governmental corporatism in the field of labour relations remained intact despite the process of Europeanization of the Greek economy and participation in the Eurozone. These policies resulted in segmented labour markets and the phenomenon of ‘jobless growth’ where the job but not the employee were protected.

Interventions in the labour market were organized and promoted through the three successive bail-out programs of the Greek economy under Troika supervision for the period 2010-2018 (Memorandum I, II and III). The most important reforms were a major departure from the previous system of Free Collective Bargaining. These changes include abolishing the “principle of favourability”, suspending the obligatory extension of collective agreements until the end of the economic adjustment program, reducing the time expired collective agreements remain in force to three months from six, introducing non-union representatives into firms with the right to conclude company-level collective agreements (the so-called “associations of persons”) and establishing a legal minimum wage (cut by 22 per cent), not by collective agreement, with sub-minimum rates for employees under 25 years old.

The reforms introduced in the labour market, contrary to policies set out under the European Economic Governance and the Country Specific Recommendations where a deregulation effort was also observed but in a social partnership context (Voskeritsian et al, 2017), promoted a policy of complete decentralization of the collective bargaining system without prior consultation with the social partners. These policies resulted in fragmentation and individualization of collective bargaining practices, after a process of disorganized rather than organized decentralization (Koukiadaki and Grimsaw, 2016).

What were the results of the reform changes in 2010-2018? First, there was a steady increase in flexible forms of employment. Second, wages fell by around a fifth, (20 percept) which has led to an increase in the phenomenon of in-work poverty in the private sector affecting thousands of workers. Third, contrary to mainstream neo-classical theory, labour market reforms have not brought a job-creating economic recovery, as the fall in unemployment has been rather anaemic (to 19 per cent). Fourth, we must not underestimate the impact of these changes on job quality. According to the European Jobs Quality Index 2005-2015, Greece not only records one of the worst performances, but in 2010-2015 a further deterioration as a consequence of both the downward phase of the economic cycle as well as the deregulation of employment.

Last and most important, the significant reduction in labour costs did not lead to an increase in total labour productivity and consequently in the competitiveness of the Greek economy, as shown in the graph below: 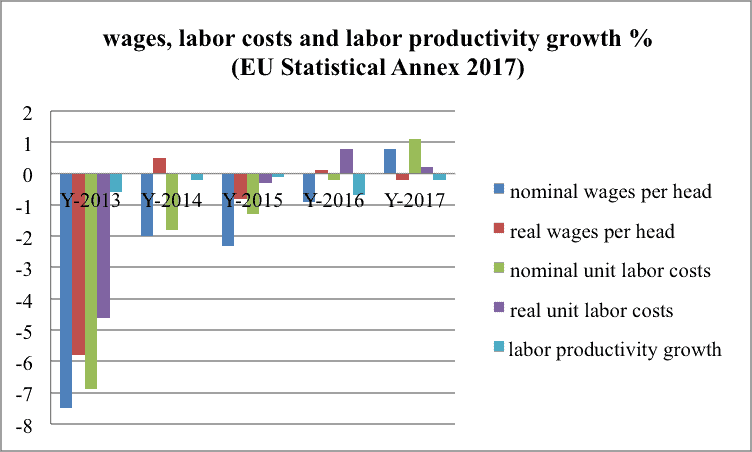 The role of social trust

Let us now examine the role of collective bargaining in the economic efficiency of labour and, in particular, its importance in the Greek labour market during the economic crisis. The concept of voice plays a central role in the economic behaviour of collective bargaining. Voice is the alternative response to the crisis of organizations and businesses instead of exit. In some cases, voice has lower costs than exit, allowing organizations to adapt to new conditions. The positive collective voice/institutional response can change the nature of the employment relationship and, in doing so, increases levels of productivity and equality in many settings.

Nevertheless, an effective collective voice presupposes high levels of trust between social partners. Strong statutory regulation undermines the possibilities of effective labour relations. Indeed, a negative correlation exists between the degree of cooperation among social partners and that of state intervention in the determination of industrial relations (Aghion, Algan and Cahuc, 2008). Therefore, voice, in the form of social dialogue, is the key feature of an effective co-ordination mechanism in labour markets. Without adequate voice, co-ordination becomes inefficient, owing to incomplete and asymmetric information. Thus, the main issue is how far the institutional framework for collective bargaining is sufficiently representative and inclusive.

Low trust is one of the main features of the Greek labour market. Since 1990, the statutory regulation of the collective wage bargaining system has prevented a representative social dialogue from functioning. A multitude of professional groups and social categories remained on the periphery of collective bargaining, conducted under state regulation, and with unions, mainly in the public sector, being over-represented. On the contrary, the unemployed and the private sector employees were kept at the margins of the Greek dual labour markets. The low level of trust in the Greek labour market is evidenced by a series of indicators such as the low participation in trade unions (low union density) and the high numbers of strikes before and during the recession. Therefore, the collective voice was not representative and social dialogue was ineffective. Interestingly, Greece is the only EU country where the minimum wage is fixed unilaterally by the state at the final stage without prior consultation of the social partners. Thus, communication was blocked, the landscape of labour relations was deeply confrontational, and there was little room for cooperation.

The radical deregulation of the Greek labour market has led to the disintegration and disorganization of labour relations and almost complete individualization of wage bargaining. Labour market institutions are deeply rooted in national histories and social norms. “One-size-fits-all” policies for wage bargaining co-ordination rarely work. The Greek economic crisis and the subsequent adjustment of labour markets leave room for useful institutional experimentation based on the specific characteristics and needs of the Greek labour market. That could be an appropriate firm-level bargaining system combined with a national framework for setting wage floors.