With the returning regularity of a bad habit, the Financial Times reassures us that yet again German economic growth snatches the euro zone from the jaws of recession. Just a day later the same august source bemoaned “sluggish” growth in the euro zone. And a few days later the European Central Bank confirmed non-recovery with a pledge for more of its ineffective and inequality-enhancing monetary expansion.

The chart below shows the continuing weakness of the euro zone recovery. For the last four years, 2012-2015, only two countries recorded an annual growth rate of 2% or more, Germany once (2014Q1) and Spain for the last five quarters. Since the beginning of 2010 when all six countries (including Greece) registered positive growth rates, average growth rates for four countries were negative, less than one percent for France and Germany over 1% but well below 2%.

The Greek economy suffered the worst collapse, coinciding with the introduction of creditor imposed austerity. Were it not for that economic disaster the performances of the other economies would be recognized for what they are, stagnation unprecedented in Western Europe during the post war years. 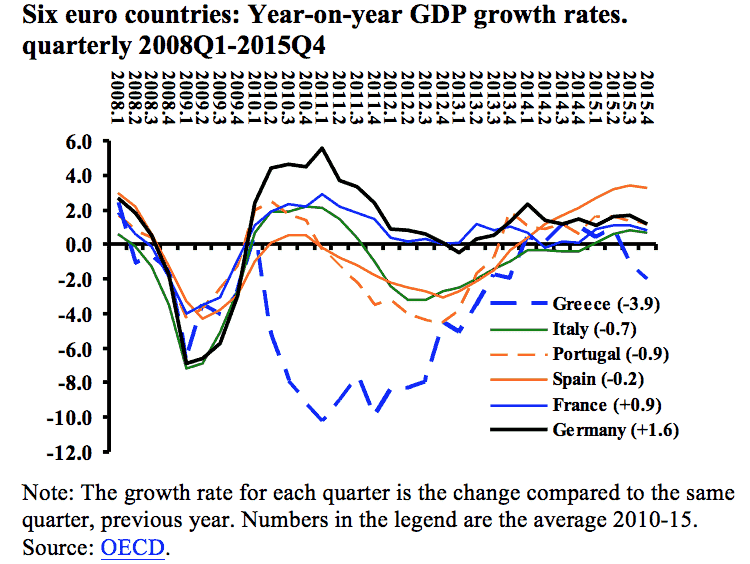 The next chart reveals the probable and proximate cause of this growth stagnation. In 2010 to respond to the Greek crisis, the dominant policy makers in the EU embarked on their pre-Keynesian austerity strategy, the economic equivalent of the bleeding of the ill to cure their maladies (a medical practice that stopped in Europe at the end of the 18th century).

The chart normalizes all overall balances to zero, then reports for every year the percentage point difference from the 2010 base. For example, Portugal had the largest change, a reduction of its fiscal deficit by 8 percentage points (not 8%), to -3% of GDP for 2015 (shown in legend). It should come as no shock that the two countries with the slowest growth rates in the first table, Greece and Portugal, are in the second chart those with the largest “improvements” in the fiscal balance.

Despite the reduction in overall deficits for all six countries, after six years only one, Germany, achieved a positive balance, and in three of the six the deficits remained above the infamous Maastricht guideline of minus three percent of GDP.  Continuing to pursue a policy that has failed for half a decade qualifies as dysfunctional obsession. 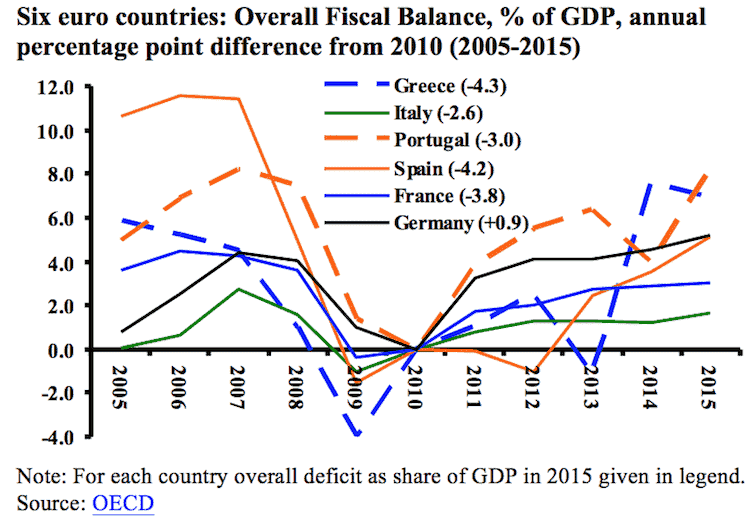 Failure to achieve the stated target for overall fiscal balances and the associated slow economic growth resulted in a second failure, the goal of reducing the gross debt to GDP ratio. The third chart shows the percentage point change in this ratio, with the debt measured according to Maastricht rules (the ratio at the end of 2015 is given in the legend to the table).

Only for Germany does the debt to GDP ratio fall, but before issuing congratulations for prudence and sound public finance management inspect the chart closely. The ratio fell by an extremely modest 10 percentage points after six years. At that rate the German government will not reach the Maastricht 60% target this decade.

Therein lies a clear lesson for the other countries, whose debt to GDP ratios rose by 15 to 40 percentage points (France and Portugal, respectively). Deficit reduction via expenditure cuts and tax increases depress GDP growth. Should the austerity measures eventually generate a positive fiscal balance, at the low rate of growth results from these demand depressing policies debt reduction is glacially slow (perhaps with climate change that is no longer so slow). 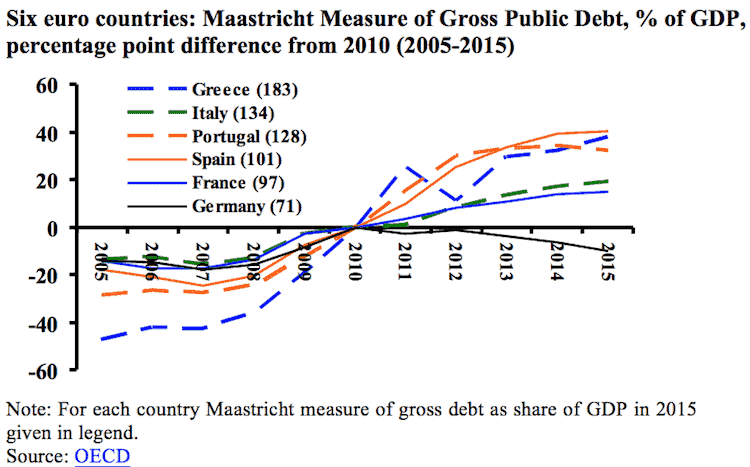 Output stagnation, accompanied by its witch’s familiar persistent debt overhang, makes it clear that the dysfunctional EU fiscal rules cannot be “muddled through”. They require radical revision, nothing less than the abandonment and/or repeal of decrees and treaties than require governments to pursue pro-cyclical fiscal policy.

British voters face an in-out referendum this summer. Anti-integrationist parties claim the support of large parts of the electorates in France and Spain. The new government in Portugal is likely to break with or at least force a confrontation over Commission directives on its budget plans. In Italy the prime minister, once strongly supportive of the EU, now threatens public revolt against EC austerity.

The growing support for right-wing anti-integrationist parties throughout the European Union calls for a coherent response from progressives in every country. A central plank in the progressive case for the European Union must be abandoning the current deficit and debt rules and policies, in order to change to a counter-cyclical, active fiscal policy.