Trade unions tend to see wages not as a factor of competitiveness but as an engine that drives demand, growth and jobs. The Economic Outlook published this week by the OECD supports this view as it explains the lacklustre economic that is going on via the stagnation of wage dynamics.

The OECD’s point of departure is that the economy still finds itself in a ‘low growth trap’. Growth is forecast to remain limited to just 2 percent across the OECD and 1.7 percent for the euro area.

After stressing that the extent to which the recovery can gain sufficient momentum to escape this trap will be a key issue, the OECD explicitly turns to the important role of wages by stating that ‘a durable and stronger upturn in household incomes and consumption requires stronger wage growth’.

Here, however, the OECD is rather downbeat by acknowledging that the transmission channel from lower unemployment to higher wages is broken. Despite falling unemployment rates, wage growth has been ‘remarkably stable’, in other words very modest. Moreover, the OECD does not expect this to change rapidly in 2017 and 2018 with real wage growth would remain stuck at around 0.5 percent.

What explains this broken link between unemployment and wages? 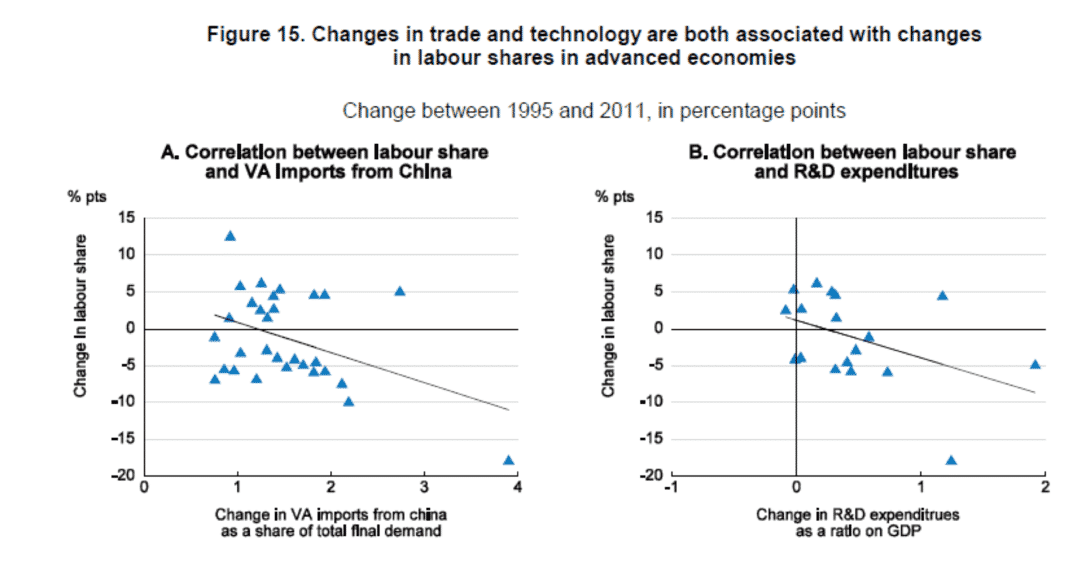 The recognition that low wage dynamics are holding back the economy and that this also has to do with the weaker bargaining position of labour and with the fact that wages for the typical worker are systematically lagging behind productivity should logically lead to suggest policies and reforms that support wages by (re)strengthening bargaining systems.

That is unfortunately not the case. The OECD in its Outlook remains absolutely silent on this issue, perhaps with the exception of a very implicit reference to the role of minimum wages. Indeed, the statement that the ‘subdued nature of economy-wide wage growth contrasts with the pick-up in the annual growth of minimum wages in some major economies’, may be read as a cautious pointer to adopting stronger minimum wages. In fact, in other recent publications such as the 2017 ‘Going for Growth’ report and the EDRC review of Japan , the OECD does indeed recommend the US, South-Korea and Japan to increase their minimum wages.

Instead, the OECD focusses entirely on the first factor of labour market slack, arguing that wage pressure should eventually show up as labour markets continue to tighten. To fully eliminate existing labour market slack, the OECD is calling for a policy mix where a gradual reduction of monetary policy support is offset by a more active use of fiscal policy along with more ambitious structural reforms. This raises serious questions.

Why take the risk of withdrawing monetary policy support if labour market slack is still pervasive while core inflation is stuck substantially below price stability targets? What will be the implications of ‘tapering’ off quantitative easing (QE) in the euro area? What if this substantially weakens the QE monetary policy lifeline for distressed Euro Area members such as Italy or Spain? What if fiscal policy does not step in, with the Euro Area sticking to the Stability Pact or strides off in the wrong direction with a ‘trickle up’ strategy whereby the rich in the US get tax cuts while all the rest get welfare cuts?

And, importantly, what are ‘more ambitious structural reforms’ supposed to mean? This turns out to be about getting displaced workers into a job by shifting funds towards active labour market programs and this within a given budgetary envelope. In other words, this is about financing active labour market spending by reducing unemployment benefits (see also this OECD paper).

OECD recommendations in Going for Growth 2017

To conclude, the OECD’s Outlook is not consistent. While the positive role wages play in supporting economic recovery is recognised, the OECD fails to draw the proper conclusions. Instead of arguing in favour of reforms that strengthen labour’s bargaining position, the OECD in the end does the opposite by again insisting on reforms that weaken workers’ bargaining position. If policy-makers were indeed to follow this, the recovery will not be buttressed but weakened.