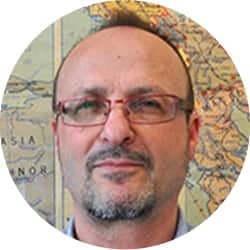 It would be a serious error to interpret the authoritarian drive in Turkey through a cultural/civilizational lens: it is not an extreme move by a power-crazy dictator, still less the finally unveiled predictable outcome of political Islam’s strategy. It is not the result of a ‘clash of civilizations’ between Islam and the secular West, in the sense of Samuel Huntington’s apocalyptic prophecy. The current conflict in Turkey is not a battle between secularism and religion, but one between dictatorship and democracy. The authoritarian drive by Erdoğan is disastrous news for everyone struggling for freedom, democracy, and social justice: atheists, Muslims or Christians.

Erdoğan’s right-wing authoritarian move, allegedly in response to the 2016 July coup attempt, is not an isolated event, but part of a surge to right-wing authoritarianism in world politics. Similar developments include the rise of the far right across Europe, razor fences covering Eastern Europe’s borders reflecting growing xenophobia and fear of the other(s), militant Hindi nationalism in Modi’s India, Shinzo Abe’s campaign for ‘national revival’ in Japan, and the militaristic tactics of Duterte in the Philippines. This right-wing authoritarian surge is not rooted in the personalities or psychology of Trump and Erdoğan or other similar political leaders. Nor is it simply a device by various right-wing populist politicians to exploit voters’ simmering dissatisfaction with the existing economic and political order and use it for their own political benefit. Such calculations are of course present but underneath such political manoeuvres, long-term historical factors are at work, factors affecting the changing power balance in the world. Trump, Erdogan and others in the ‘ring of autocrats’ are less the creators than the outcome of protracted economic, social and political processes.

Western right-wing authoritarianism has adopted sometimes a Christian and sometimes a secular form, but both are equally anti-migrant and anti-Islamic; Turkish right-wing authoritarianism has adopted anti-Kurdish and Islamic forms. But this should not deceive us about what is really at stake. In both cases, the right-wing authoritarian drive is based on repressive social conservatism” quote=”the right-wing authoritarian drive is based on repressive social conservatism that legitimises dangerous paths against democracy, individual rights and social justice.  All such right-wing shifts are the results of an increasingly more volatile and chaotic international situation, which is the direct consequence of a process of what Arrighi called ‘Hegemonic Transition’ within a period of systemic chaos. The late twentieth-century saw renewed great power rivalry, system-wide financial excesses and bursting bubbles centred on the declining US hegemon, and the emergence of new loci of power, in particular China and India. So, the core logic of this right-wing move can be analysed properly within the context of major global structural changes which have been affecting the world system for the last 20-25 years.

When the authority of a major power or global superpower is on the wane, this affects the entire world order and leads to instability. According to many experts, the US is facing a decline that has grown ever more noticeable since the end of the Cold War. Even though the US still represents the largest and strongest economic and military power in the world, it is nevertheless struggling with severe weaknesses resulting from low economic growth and the protracted decline of its industry. The most important, structural transformation that took place in the US-led global economic system after WWII was a massive crisis in manufacturing manifesting itself as stagflation (economic stagnation accompanied by double-digit inflation). The decline in productive capacity and the ever-widening gap between productive and financial accumulation lead to recurrent financial and economic crises in every corner of the world. The global chain of extreme financialisation and speculative profiteering broke in 2007-09, only to be transplanted into the eurozone via the over-leveraged banking sector.

In parallel to this decline in the overall weight and influence of the US, the last two decades have witnessed the emergence of other economic powers pushing themselves to the top position, with, as a result, the global power balance altered in a fundamental shift towards a multi-polar world system. New centres with global influence have emerged in Southeast Asia, in particular China and India. Other states of medium size, regional or emerging powers, have also increased their influence in the same period.

The rise of the new emerging powers was not, and will not, be linear, mainly due to the major differences between countries and the exceedingly inconsistent domestic situation in many of them. Economic growth, the size of the population and the country, do not automatically confer regional, let alone global, leadership. The criteria are set far higher: reliability, trust of one’s neighbours, soft power capability, and provision of public goods for the region and beyond.

The US-centred world we have known is fast losing its predominance and being replaced by a new international system shaped by the arrival of these new actors. This is basically what causes the breakdown of the global order and the turn of the ruling elite in many countries to unconstrained economic and political nationalism. The West, collectively, noticeably does not have the means to back up its policies in the Middle East, Africa, Ukraine, and Southeast Asia. The new emerging powers, on the other hand, aspire to a new order of global politics, but, lacking any real leadership capacity, are not yet in a position to impose their will upon various regional and global conflicts. There are global and regional governance gaps fuelling many ongoing conflicts from Syria to Ukraine, from a range of Latin American countries to the eurozone. The US is more and more losing its ability to take the lead and govern, and the newly emerging countries have serious intentions to fill the vacuum, but are not yet ready, nor powerful enough to lead. Therefore, leadership, order, and regional and global governance are no longer assured.

The world is currently in a fragile imbalance as the global hegemon’s decline continues, described fittingly by celebrated Financial Times journalist Martin Wolf: US power has retreated both geo-politically and economically and we are living, ‘once again, in an era of strident nationalism and xenophobia’. Rising levels of inequality, unemployment, frustration and anxiety in the wake of the Great Recession of 2008 have created conditions much more favourable to the more recent expansion of pseudo-conservative movements and the intensification of the authoritarian aspects of their rhetoric. In the long history of global political economy, crises come and go, as do the focal points around which they form. To understand the dynamics of the current process of right-wing authoritarian shifts we must also understand the history that gives it volume and reach. The victories of Trump in the US, the ‘Leave’ campaign in Britain, or Erdogan’s authoritarian move are but epiphenomena of momentous shifts in the global political economy and international geo-political alignments that have been taking place more openly since the end of the Cold War.