The German government has been a strong supporter of austerity programmes, arguing that the associated goals of deficit and debt reduction provide the best, if not the only, route to economic recovery in Europe. Some writers reach back to the hyper-inflation of the 1920s to explain this faith in the virtues of belt-tightening.

Recent release of statistics showing an increase in the growth rate for the last quarter of 2014 has been taken by much of the EU media as supporting evidence of austerity-brings-recovery. A Financial Times article of 3 February told readers that the statistics “confirmed Germany’s role as Europe’s powerhouse”.

The German government preaches that all euro members should follow its example of austere export-led growth, apparently innocent of fallacy-of-composition arguments (for every surplus there must be a deficit, read Andrew Graham in The Guardian). In recent weeks the German finance ministry has been especially zealous in lecturing the Greek government on the virtues of trade surpluses and a positive fiscal balance (FT 19 February).

The New York Times was a bit more restrained in its choice of words, calling the fourth quarter growth performance a “sign” that the euro zone might do “moderately better” this year compared to last (NYT 15 January). But the basic message was the same as in the FT, Germany continues to be the economic success story of the European Union.

A close inspection of recent German economic performance casts doubt on the wisdom of “do-as-we-do” advice from Berlin.

The chart below shows the dubious nature of the German “recovery”.  The dramatic improvement in German economic growth occurred from the second quarter of 2009 to the first quarter of 2011, associated with a fiscal stimulus of 1.4% of GDP (reported in the table on page 43 of the Trade and Development Report 2011).

By the beginning of 2011 austerity policies spread across the euro zone in no small part due to pressure form the German government — Greece, Ireland, Italy, Portugal and Spain, with northern countries soon to follow. By no accident the German recovery came to an end at the same time euro zone stagnation set in.

German policy makers cannot credibly attribute the stagnation to weak demand in the world economy. From mid-2010 through the third quarter of 2014 German exports increased by 16% (4% annual rate) compared to 4% for GDP (1.3% per annum). If it were argued that external demand was weak that makes the need to replace domestic austerity with a fiscal stimulus all the greater. 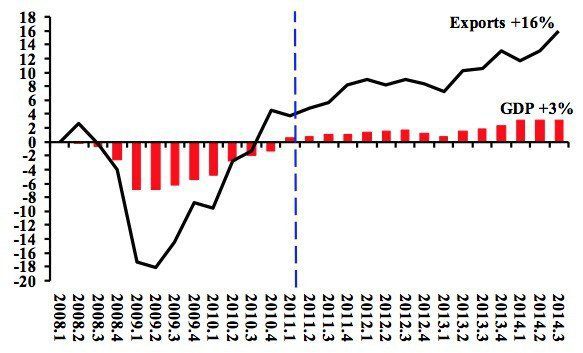 The failure of investment to recover from the global shock of 2008 provides much of the explanation of the persistent stagnation of the German economy.  As for GDP, investment recovered strongly in 2009 and 2010, then contracted sharply. Far from stimulating “investor confidence”, the policies followed after early 2011 resulted in a second collapse in investment. 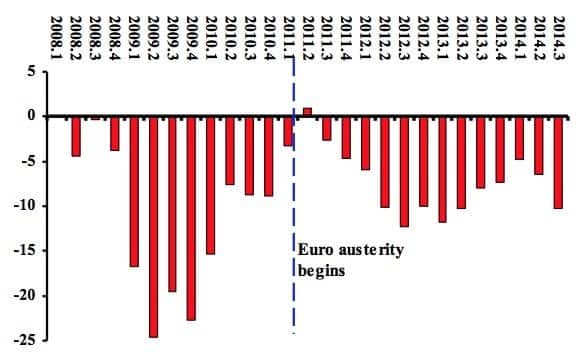 Rather than being a model for others to follow, German economic policy and performance demonstrate the limits to austerity and export-led growth. Wolfgang Münchau of the Financial Times calls the former “economic illiteracy” (FT 16 February) and the latter is pure mercantilism.

The belief that austerity leads to growth is absurd. And practicing a trade policy discredited 250 years ago by Adam Smith abandons the basic principles of a common market.

This blogpost was first published by The Huffington Post