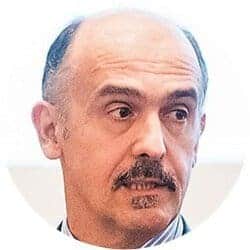 Seventy years ago in Fulton, Missouri, Churchill delivered one of his most influential speeches. In the cavernous hall of Westminster College, the former UK Prime Minister coined phrases that have stood the test of time: “special relationship,” “sinews of peace” and the “Iron Curtain.”

In that speech Churchill famously cautioned that “an iron curtain has descended across the Continent.” He lamented this curtain stretched “from Stettin in the Baltic to Trieste in the Adriatic,” decried the “Soviet Sphere” and regretted that, behind the curtain, “except in Czechoslovakia, there is no true democracy.”

The results from the recent Czech general election suggest Andrej Babiš will become the de facto next Prime Minister.

If so, a rusty curtain of populism will have descended across the Continent.

It stretches from Szczecin in the Baltic to the shores of the Adriatic. Behind it, lie the capitals of the ancient states of Central and Eastern Europe: Warsaw, Vienna, Budapest and Prague. In all of them, populists seat at the helm of government.

Around the world, we define populists as those whose policies redistribute resources to their electoral bases while simultaneously concealing the true long-term economic costs of these policies. Populist policies today tend to be presented as anti-elite (e.g., “take back control”), anti-globalisation (“MAGA”), anti-evidence (“people in this country have had enough of experts”) and anti-media (“fake news”).

Across Europe today, populist rhetoric has an additional and distinctive element: it berates the European integration project. Its preferred targets: the single currency and the EU refugee/immigration policies.

There are incongruities in this anti-EU rhetoric but also, in closing ranks and drawing the curtains, there are also severe dangers.

The anti-EU rhetoric of many governments in Central and Eastern Europe is incoherent. A generation ago, these countries were part of the Soviet sphere. These were Communist economies in which neither prices nor credit (both crucial forces driving Schumpeterian innovation and hence long-term growth and productivity) played decisive roles. Since the collapse of the Soviet Union, these economies grew rapidly. They have also done relatively well since the financial crisis of 2007.

Populists could achieve electoral victories in Hungary, Poland and the Czech Republic because they argued that this impressive economic performance took place in spite of the EU when in reality, it happened because of the EU.

Economic theory is adamantly clear that the reason these countries grew so rapidly is because they were relatively poor 25 years ago. They enjoyed the multiple advantages of relative backwardness.

Yet economics is equally adamant that convergence is conditional. Poorer countries grow more quickly when they have the conditions and the institutional framework to cross minimum critical thresholds. Wheels are more effective over tarmac than on sand.

The European shared values of respect for democracy, human rights and the rule of law have economic implications. These shared values and institutions cause economic growth and it is very likely but not proved yet that the reverse is also true.

Democracy increases GDP by encouraging investment in physical and human capital, by improving the provision of public goods and by supporting economic reforms. Human rights such as freedom of speech and assembly are the backbones of democracy. The rule of law enforces property rights and provides checks on government.

These shared values underpin economic growth because they support the build-up of state capacity. EU membership buttresses the capacity of the state to uphold political and economic freedoms, enforce law and order, regulate economic activity, and provide public goods. This process is led by a positive feedback between a capable judiciary and an independent state bureaucracy in building up state capacity.

In Poland and the Czech Republic, the EU accession process was instrumental in underpinning the independence of the judiciary, the re-tooling of the state bureaucracy and the very creation of a competition policy capacity, while in Hungary the prospective anchor of EU membership decisively helped consolidate the enormous gains of the first years after the Communist collapse.

Membership of the Soviet sphere gave similar advantages of backwardness to Poland and Ukraine, but the realistic prospect of joining the EU early on gave the former the institutional roadmap, the timetable and the anchor for the necessary reforms.

The anti-EU rhetoric is populist, but more worrisomely, it represents an important danger to the European integration project itself. Rejecting the euro and rejecting two-speed Europe are contradictory. Whenever and in whichever form Brexit occurs, for all practical purposes (because only the UK and Denmark have legal op-outs from the single currency) the Eurozone will become the EU’s core.

Yet the anti-EU populist rhetoric remains popular. Winning back dissatisfied voters will require designing, implementing and, perhaps more importantly, explaining policies that target and close the gaps in democratic representation that populists often exploit. This is a long-term project that needs to start now. Whichever way Mr Babiš governs will have a big say in how swiftly and tightly the curtain lifts.

Nauro F. Campos is Professor of Economics and Finance at Brunel University London and a Research Professor at ETH-Zürich. He was previously Director of Research of the Institute of Economics of the Czech Academy of Sciences and of CERGE at Charles University in Prague.