Obama is Leaving Economic Inequality for his Successors to Fix

President Obama is emulating former President James Buchanan. His economic agenda is to kick the can down the road, leaving his successors an America of widening economic inequality without prospect of remediation.

The Obama Presidency is facing the most toxic, polarized environment since the antebellum era. Yet, legislative gridlock is no excuse for its lack of economic vision in addressing Gilded Age-income disparities promising to extend in perpetuity.

Abraham Lincoln faced a similar challenge on the issue of slavery in 1860, likely to endure indefinitely. He is America’s greatest President because he rejected that future. Lincoln ignored the admonitions of former Presidents including his immediate predecessor James Buchanan to permit the horror of slavery to encompass all the territory (north as well as south) from the Mississippi to the Pacific. That would have avoided war, but at the calamitous cost of empowering slavery for generations to come.

Oh sure, recovery will eventually tighten labor markets sufficiently for real wages to rise a bit as they did during the 1990s boom. But the seminal reality will persist: Americans have worked harder and smarter since 1980, labor productivity rising about 75 percent. Yet, inflation-adjusted wages in the U.S. have stagnated, most of the gains from higher productivity going to the famous 1 percent. That is what the widening income disparity is all about.

Real wages will continue stagnating in the decades to come, income disparities widening further. Indeed, the U.S. has settled into the default setting for most nations throughout history explored by Daron Acemoglu and James Robinson (Why Nations Fail) where political inequality begets chronic economic inequality.

Wages Have Continued Rising in Australia and Northern Europe, Unlike America

In contrast, real wages in purchase power terms are $10 an hour higher now in Australia and northern Europe, with investment higher as well. The past decades have been different for the middle class in these nations, with real wages and living standards rising steadily year in and year out to now surpass the U.S. And their future will be different as well. Families there will continue to receive a hefty share of productivity gains. And the reason is that those nations, beginning in the 1940s began importing the Australian wage system, a century-old refinement of capitalism used to widely broadcast the gains from rising productivity. It has proven to be a tremendous success.

Between 1999 and 2008, productivity rose 13 percent in the European Union, with 60 percent of the gains going into real wages, up 8 percent. Productivity growth has slowed since, but about 60 percent has nevertheless continued to flow into real wage gains year after year – gains that have averaged nearly 1 percent annually in Germany and France. And real wage gains have averaged .86 percent annually in Australia since 2002 as well. Not so in America.

With real incomes and living standards for most workers in these rich democracies rising 50 percent over a career, they have avoided the American destiny of a shrinking middle class. They offer a stark lesson should Obama be inclined to emulate Lincoln and recraft the future. The remedy this time around is more than 40 acres and a mule. He must take two steps to become a transformational President: 1) bring U.S. corporate governance into the twenty-first century, and 2) link wages nationwide to productivity growth as the American labor movement accomplished until weakened after 1980. 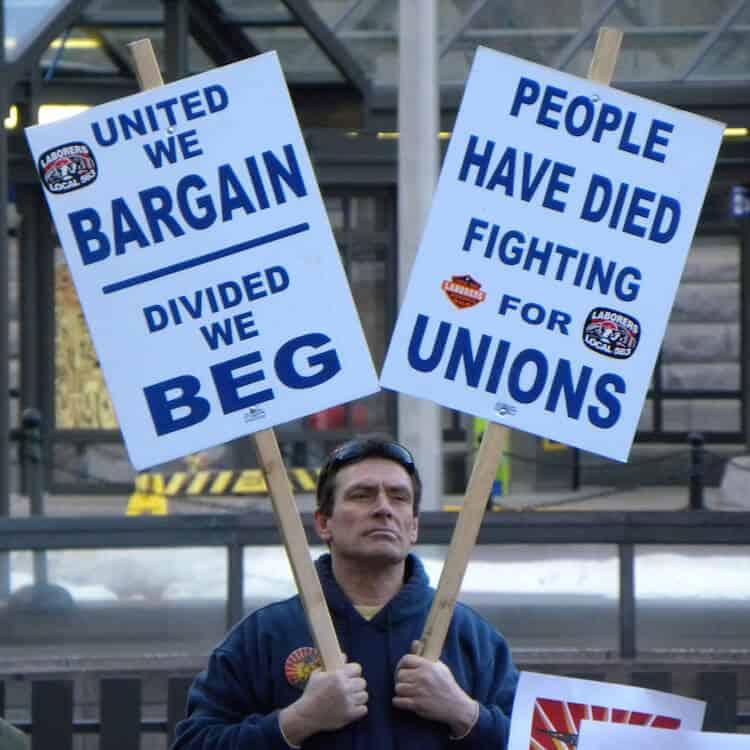 In the US, real wages have not risen in a long time and labour union’s have been weakened (photo: CC Fibonacci Blue on Flickr)

Limited liability corporations are the devices capitalist societies have evolved to create wealth, overseen by boards of directors. American boards suffer from an important deficiency that allows executive suites to practice short-termism. That syndrome is extensively lamented by economists, most recently by Clayton Christensen and Derek van Bever in the June 2014 Harvard Business Review, and in my own book What Went Wrong. Management and share speculators benefit financially from short-termism, also called managerial or quarterly capitalism. But their behavior disadvantages everyone else, with U.S. firms – in contrast to those in northern Europe – compressing wages, offshoring valuable jobs, eschewing worker upskilling, shortchanging investment and rejecting profitable longer term R&D in order to spike quarterly profits.

That explains why investment by nonfinancial firms in Australia and northern Europe has outpaced investment by American firms for decades. U.S. publicly-held firms even invest far less than privately-held U.S. firms: John Asker and Alexander Ljungqvist of NYU and Joan Farre-Mensa of Harvard found that publicly-held U.S. firms devote only 3.7 percent of assets to investment compared to 6.7 percent at privately owned firms. Foolish mergers are another element of the syndrome as examined by Jeffrey Harrison of Richmond and Derek Olin of Texas Tech. And so is under-investment in employees. That is why Australia and every nation in northern Europe now have more skilled labor forces than the United States. As recently as 1998, it wasn’t that way, but skill levels in nations like Austria, Denmark and France have since leapfrogged the U.S. level.

Firms in Germany and other northern Europe nations have avoided short-termism by adopting a system called codetermination. It puts adults with a long-term perspective in charge of corporations by stocking corporate boards of directors with employees. Employees hold one-half of the board seats of every single German nameplate firm, VW and Daimler, for instance. And shareholders will applaud codetermination because it means greater returns, as American economists Larry Fauver and Michael Fuerst concluded in 2006.

Under the Australian wage-determination mechanism, used there and in northern Europe, nationwide wage-setting is linked to productivity growth, ensuring that the gains from growth accrue to most rather than a few. It is how they have surpassed American living standards. And it’s a reform that America must adopt in order to begin rebuilding the middle class. A complementary approach is to reinvigorate the U.S. trade union movement, whose similar policies endorsed by both Republican and Democratic presidents built the great American middle class.

Any proposal to redirect economic flows will induce fierce opposition, these reforms especially so because they have a successful record of broadly spreading the gains from productivity growth. Once implemented, they will become a permanent feature of American capitalism just as they have become pillars of German capitalism. Their implementation will take years. But Obama’s legacy of accepting widening income disparities in perpetuity can be salvaged by a decision to place the reforms on the public agenda.

Obama Is Emulating James Buchanan When He Should Look to Lincoln

As Obama mulls that legacy, the President might consider another historical analogy. The founders crafted a Constitution with a Senate, an Electoral College and checks and balances intentionally designed to thwart abolitionists and the popular will. Historians term it the status quo bias against reform and it’s at the heart of dysfunctional Washington today. The founders sided with Edmund Burke who fretted about unanticipated consequences, rather than Thomas Paine who fretted about squandered opportunities.

In pondering his options, a cautious President Obama might erroneously believe he faces that same dilemma and continue to choose Burke. He would be wrong. The Australians and Germans have done the heavy lifting in crafting a refined capitalism of proven and seasoned performance, the outcomes knowable.

Obama’s actual choice for his economic legacy is between Lincoln and Buchanan.