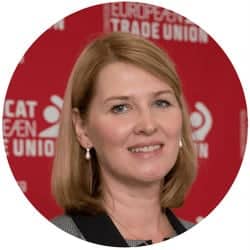 As the weather cools and Europeans get back to work after the summer break, the temperature of the EU trade policy row is hotting up.

With the date set for the signing of the controversial EU-Canada Comprehensive Economic and Trade Agreement (CETA) in October drawing nearer, positions are hardening. On 17 September, Germans and Austrians will take to the streets to oppose CETA in a demonstration supported by trade unions and NGOs. On 20 September it will be the turn of Belgian protestors.

The European Trade Union Confederation opposes both CETA and the Transatlantic Trade and Investment Partnership (TTIP) with the USA in their current form. We believe the EU must fundamentally change its trade negotiation strategy, if it is to avoid damaging jobs and working conditions in Europe, putting public services at risk and further alienating public opinion. Opposition to TTIP has grown in 24 EU Member States, and in Germany, for instance, according to a recent YouGov survey, support has slumped to 17%. Swathes of the EU public are angry and willing to take action to show it.

CETA and TTIP are far more than traditional trade agreements.  They incorporate mechanisms to protect investors, which open the way for hugely powerful multinational companies to challenge laws, passed by democratically elected governments for the public good, before special courts.  They are unbalanced: in favour of business because they protect investors but offer workers no protection. The proposed deals also aim to align (i.e. cut back) regulations that may have been introduced in response to public demand and that in Europe must conform to the ‘precautionary principle’ – but not in the USA or Canada.

As a so-called ‘mixed agreement’, CETA must be approved by individual Member States as well as the EU. And more and more governments are expressing concern about and even outright opposition to both transatlantic deals. France has expressed serious concerns about the TTIP talks, while German Vice-Chancellor Sigmar Gabriel believes they have already failed. Austrian Chancellor Christian Kern says CETA shares many of TTIP’s weaknesses, and has warned against “shifting the power balance in favour of global enterprises”. Romania and Bulgaria are digging their heels in over a visa disagreement with Canada, while Belgium has failed to secure the necessary support of its regions and Prime Minister Charles Michel has suggested a pause in TTIP negotiations.

The European Council is due to take a decision on CETA in October, just a few days before the EU-Canada summit where the signing is scheduled to take place. The European Parliament will also discuss the deal, probably in late 2016 or early 2017, and will have to give its approval, but the outcome is by no means certain.

The European Commission is appealing to governments to back CETA, warning that undermining the deal will mean a loss of EU credibility as a partner in trade agreements, stripping the Union of one of its core functions.

Frankly, this comes a bit late, and using such an argument to push through a bad and damaging set of rules is not acceptable. We do not regard CETA as a more benign instrument than TTIP. Many of the same companies operate in both Canada and the USA. Trade unions reject CETA as a means of “smuggling TTIP through the back door”.

From the outset of these negotiations, we have been calling for a number of conditions to be met, cooperating closely with the Canadian Labour Congress (CLC) in formulating our demands. Public services must be safeguarded and labour standards as laid down in International Labour Organization (ILO) core conventions must be binding. We have joined with the CLC in insisting that local governments must retain the right to impose social and environmental conditions on the supply of services and public procurement. Above all, we rejected the dangerous and undemocratic Investor State Dispute Settlement (ISDS) mechanism.

The European Commission bowed to pressure from unions and many other sectors of civil society in replacing the ISDS with a new Investment Court System (ICS). While this marks an important achievement for us, the scheme does not go far enough. We reject any alternative legal system that gives additional rights to powerful multinational companies.

Our other concerns focus on labour standards. We are demanding that trading partners should ratify and apply all the eight core ILO Conventions governing working conditions. Until recently, Canada had not, but we understand progress is now underway. Canadian government ratification of Convention No. 98 on the Right to Organise and Collective Bargaining would be a positive step forward. As for the USA, it has ratified only two. These fundamental standards should be at the heart of all international trade agreements, and penalties imposed if they are breached.

If the Council backs CETA, and while national governments are considering their own verdicts – which could take two to three years – the EU could start applying elements that come under European jurisdiction. In opposing the deal, we also oppose this ‘provisional application’, which is highly problematic, not least because of the challenge of separating complex responsibilities.

The Commission and Canada want to apply as much as possible. But trade unions reject, above all, provisional introduction of the ICS and we have the backing of a number of Member States. Through its affiliates, the ETUC is urging governments to put this part of the deal on hold. The Commission wants to apply investment market access even though this is difficult to separate from investment protection measures, but this should not be an excuse for expanding the scope of provisional application.

On the other hand, the sustainable development chapter, which includes labour rights, must be included if any provisional application goes ahead.  Trade unions, civil society and the European Parliament would utterly reject even temporary trade measures not coupled with a commitment to social progress.

However, even if this chapter is included in any provisional application, as it stands it is much too weak and cannot be enforced. To give it teeth, we want governments to face binding trade or economic sanctions if they violate ILO standards, just as they would for breaking any other part of the agreement.

We are now liaising with trade unions in Canada to step up lobbying in Member States and the European Parliament. Many of our affiliates are urging their governments not to approve CETA in October, and we understand that the Canadian government might be willing to accept amendments. German DGB leader Rainer Hoffman believes that the new Prime Minister wants a different kind of transatlantic relationship. One option under consideration could be to add a Protocol covering our concerns and excluding any lowering of European standards. But there are doubts about the legal force of such a Protocol.

Ideally, we would prefer to go back to the drawing board and restart renegotiating in a spirit of transparency, involving labour and civil society organisations at every step. We want civil society to have the right to monitor the whole deal, and we are calling for a full review of investment and labour provisions by the time the agreement is one year old.

On 20 September, the ETUC’s General Secretary, Luca Visentini, will be joining Belgian trade unionists and others in Brussels to demonstrate opposition to CETA and demand a new framework for international trade that gives priority to jobs, public investment, labour rights and decent work in Europe and the rest of the world. EU trade deals should aim to create a fairer world, where globalisation ceases to generate profits for the richest 1% at the expense of everyone else. We will continue to campaign until we see this approach in action.