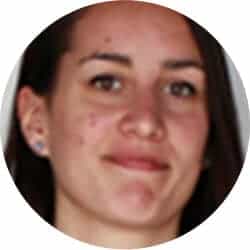 Critiques of EU democracy are currently high on the public agenda, and are by no means only the prerogative of extreme nationalists. Yanis Varoufakis has called the EU a ‘democracy-free zone’ while Nigel Farage believes the Members of the European Parliament (MEPs) are ‘anti-democratic zealots’. These are only two provocative examples of the widely-held Eurosceptic perception that the European Parliament is useless and that the European Union embodies a serious democratic deficit.

If one renounces rhetoric and embraces concrete evidence, however, a less apocalyptic picture emerges. The European Parliament, for example, is attentive to and does represent European voters, on average. In fact, it appears to serve European public opinion pretty well. Decision-making in some EU institutions may well be complex and difficult to monitor – we are talking about coordinating almost 30 independent states! – but saying that the EU is an entirely democracy-free zone appears grossly misleading.

Is the EP representative?

In a recent study on substantive representation in the European Parliament, I compare the economic policy preferences of voters in the 2009 European Parliament election with the actions taken by national parties during the 7th term of the Parliament (2009-2014). The economic policy preferences (on redistribution, privatisation and state ownership) of individual European voters were measured from the voter survey of the 2009 European Election Study. The legislative activity of national parties was evaluated from the text of their written parliamentary questions on economic policy. The parliamentary texts were coded by trained online coders (approximately 6 coders per text) via ‘crowdsourcing’, a content analysis technique which relies on the ‘average of averages’ procedure to come up with the final party ideological score in economic policy. 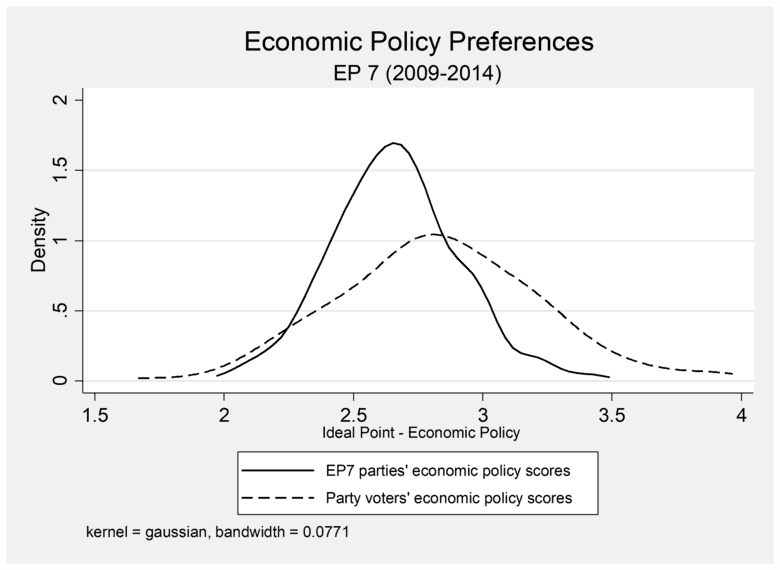 Note: The dashed line indicates the position of the average voter of each national party included in the analysis. The solid line indicates the ideological positions of all EP7 national parties included in the analysis. The statistical significance of cumulative distribution functions difference was obtained by means of the Kolmogorov-Smirnov test and it amounts to 0.298***.

Figure 1 indicates that average party voters are broadly well represented in the EP, but also that the two distributions are different to a statistically significant degree. The two points of the curve where there is a lack of overlap are the left-of-centre and the right-wing sections. Figure 1 indicates that there are more political parties in the section slightly left of centre than there are party voters, and that there are more voters in the right-wing section than there are parties. The average position of European voters (slightly left of centre) is therefore over-represented by political parties serving in the EP7. The EP7 very accurately represented the middle of the 2009 party voters’ ideological distribution. Political parties representing extreme voters, however, appear to have moved towards the centre, leaving some ideological positions without representation, especially on the economic right. The representation deficit of the European Parliament is, therefore, at most a ‘pluralism’ deficit given that the majoritarian norm of democracy seems respected.

National parties serving in the 7th European Parliament converged either for electoral reasons – to satisfy the majority of European voters – or because of the highly consensual nature of EU institutions, which foster compromise to the average position. This ‘move away’ from some average party voters (especially extreme ones) towards the median voter is not different from what has been found in many established Western democracies. According to majoritarianism, the ‘median’ voter does tend to be over-represented in a democracy, as it should be. The European Parliament – and, by logical extension, the EU – is not a ‘democracy-free zone’.

Individual-level findings: Are some voters better represented than others?

An individual-level regression model was designed to test the theories briefly outlined above. ‘Flawed’ representation is here defined as incongruence, i.e. the absolute distance between individual voters and the political parties they voted for in the 2009 election. Figures 2 and 3 provide an overview of the most important results.

Figure 2: Predicted incongruence of political parties due to ‘bad selection’ and voter ‘extremism’ 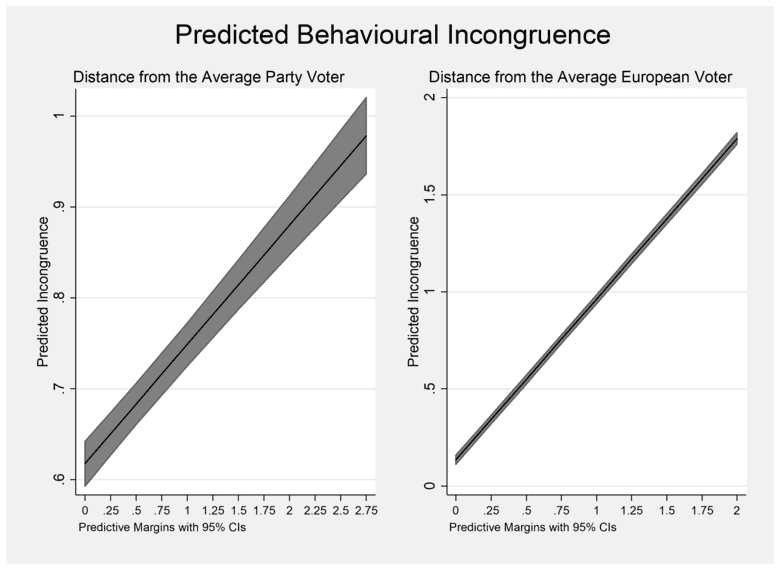 The regression results confirm that individual voters suffer high levels of incongruence if they vote for a party whose average constituent is far away from them (incompetent/incorrect vote), and if they are ideologically distant from the average European voter. These two variables have very substantial effects on incongruence, especially the variable capturing voter extremism.

They lend credence to the ‘political agency’ theory in that it is important to select political parties whose voter base is close to one’s own ideology to be represented. They further demonstrate how the EP conforms to majoritarian democracy in demonstrating that individual voters farthest away from the average European voter are most incongruent with their party. 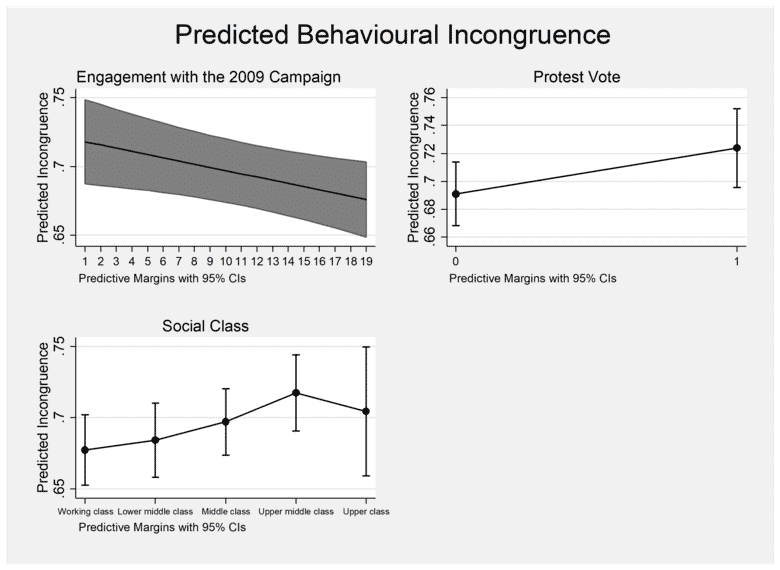 The regression results further lend credence to the political agency theory in that informational disconnect between voters and parties (such as disengagement with the electoral campaign and second-order, or protest, voting) increase incongruence between the individual voter and his/her party, while social class does not seem to matter.

Social class differences in political participation and in the composition of parliaments have previously been documented. However, these structural disadvantages of the working classes do not seem to lead to higher incongruence at the European Parliament level. If anything, the upper classes seem to suffer from slightly higher incongruence. The social class non-finding is heartening, given the class biases in political representation that have been documented in established democracies.

My study demonstrates that majoritarian democracy is reflected in the legislative politics of the EU. Written parliamentary questions are one of the most popular forms of legislative activity in the European Parliament. They represent an avenue through which all MEPs, irrespective of their roles and political pedigree, can communicate with EU executives. They are an activity through which MEPs can push an issue into the EU policy-making agenda (written questions’ descriptives are available upon request).

The analysis shows that the average European is very well represented in these ‘inputs’ to the EU political system, and that representation flaws are due to voters’ extremism, to voters not voting appropriately (e.g. selecting a party whose constituent base is ideologically ‘far’ from them, or engaging in second-order/protest voting) or to voters not following the European Parliament election campaign. Social group biases due to structural inequalities are not at all evident in the European Parliament.

The EP does not have a representation deficit: where there is incongruence, it is due to voters not being able to select the appropriate party. This further indicates that EP elections need reform: the era of ‘second-order elections’ and national governments running EP election campaigns must end if we want to counteract the information gaps between MEPs and citizens. 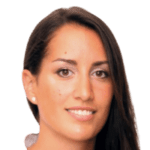 Miriam Sorace is an assistant professor in quantitative politics at the University of Kent and a visiting fellow in European politics at the European Institute of the London School of Economics and Political Science.