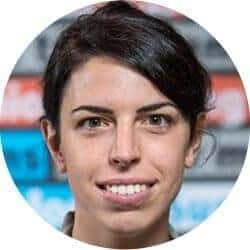 The European Union has gone a long way since the Lisbon Strategy of 2000 with its “more and better jobs” objective. In parallel with the Decent Work agenda of the ILO, job quality gained a firm ground in the EU policy debate. But 17 years after the Lisbon Strategy was adopted, it has hardly moved beyond the confines of that debate, still less transmuted into a concrete action plan or policy.

There is still no agreed indicator and no concrete target for achieving job quality in European employment policy. It does not help that, among the policy actors, views on the definition of job quality are quite divergent. As a result, the focus on quantitative aspects of employment and on the supply-side (e.g. upskilling of the workforce) continues to prevail in EU-level policy, and the quality of available jobs is not addressed.

Against this background, we have developed the European Job Quality Index (JQI) for EU28 countries. The Index offers a tool for comparing the quality of jobs held by European workers and analysing trends in job quality over time. It takes a clear stance with respect to what constitutes a good quality job and what direction of change indicates improvement.

About the Job Quality Index

Jobs are at the centre of the JQI and job characteristics are evaluated from a workers’ perspective: their health and safety, their psychological and economic well-being. Thus, even if more intense work, long working hours or low wages might increase the profits of companies in the short-run, these work characteristics are classified as indicating poor job quality, because much empirical research has demonstrated that they have negative consequences for workers and their families.

Job quality of European workers in 2015

The overall picture of job quality among EU workers in 2015 is shown in Figure 1. While we find a very small gender gap in the average job quality, there are important gender trade-offs between its different dimensions.

Women are, on average, more likely than men to work in non-standard employment arrangements, such as temporary and part-time jobs. Women are also, compared to men, more often trapped in temporary jobs because they could not find a permanent position. Interestingly, there was little difference between men and women at EU level in terms of whether they perceived their jobs as secure or not.

The segregation of women into non-standard jobs is one of the factors driving the gender wage gap, with the score for women being nearly a half that of men. In our Index, we consider the difference in net monthly, nor hourly, earnings, as this shows how much financial resources one has at the end of the day to cover the cost of living.

In contrast, women reported better working time quality and working conditions. This is due to overall shorter weekly working hours and a lower incidence of work during unsocial hours among women. Better quality of working conditions, on the other hand, is mainly related to sectoral gender segregation, with women less likely to be exposed to certain physical risk factors. Women, however, have less autonomy at work and less control over the organisation of their work.

Finally, men were slightly more likely to work in workplaces where trade unions or works councils are active, while there was little gender difference in skills and career development.

The average experience of job quality at EU level hides huge variation across the Member States. As illustrated in Figure 2, overall job quality was particularly low in Greece, followed by Romania, Spain, Poland and Hungary while Denmark, Luxembourg, Finland and Sweden were among the top performers. Job quality was lower in post-2004 accession countries compared to the EU15 group. 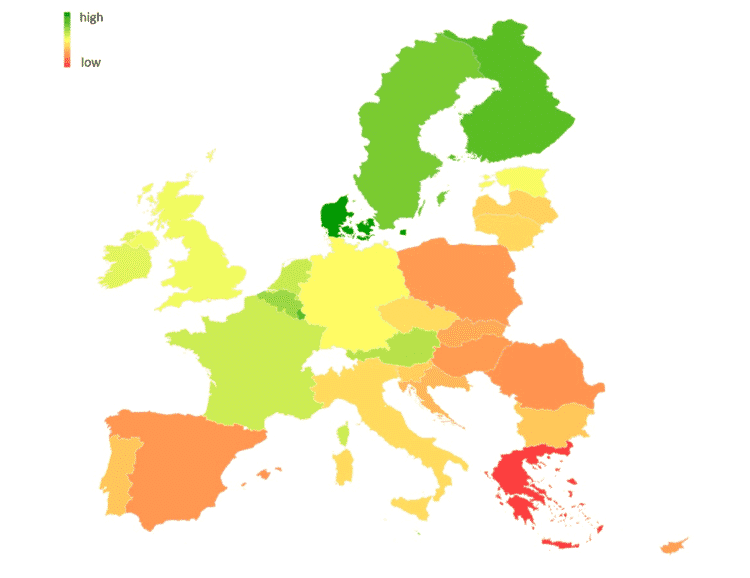 Notes: Overall job quality index is the simple average of the six dimensions

Since the height of the post-2008 crisis, some progress has been made in bringing more Europeans into paid employment and curbing unemployment. Changes in the quality of jobs over the past decade are more difficult to pin down as they have been driven by a variety of often contradictory factors.

On the one hand, many of the long-term structural trends towards a knowledge-based economy (such as a rising level of skills or technological change) were expected to bring overall improvements in the quality of work, at least for workers with the ‘right’ skills. On the other hand, the post-2008 crisis impacted job quality in at least two ways. The considerably weakened market power of workers, due to rising unemployment and declining collective representation, gave employing organisations the upper hand in imposing less favourable work and employment conditions. This had a largely negative effect on the quality of existing jobs. But, at the same time, poor quality jobs (e.g. with temporary contracts) were shed more at the beginning of the crisis, thus driving up the average levels of job quality at country level.

When growth in employment resumed with the economic recovery, albeit it remained fragile, it has been accompanied by a widespread perception that many of the new jobs that are being created are “bad jobs”. Our analysis largely confirms such perceptions and shows that non-wage job quality has indeed deteriorated over the last decade at the EU level (measured both as EU28 and EU15 average). Compared with a decade ago, average non-wage job quality in 2015 was lower in ten countries (see Figure 3). Improvements in non-wage job quality were most visible in countries such as: Czechia, Bulgaria, Estonia, Malta, Poland, Finland, Latvia and Lithuania. Declines in non-wage job quality occurred in fewer countries, but they were much more pronounced, most notably in Greece, Cyprus, Slovenia, Romania, the UK and Ireland.

Overall, the most common pattern of change in job quality across EU28 countries is a decline in 2010, in consequence of the post-2008 crisis, followed by a modest increase in 2015. 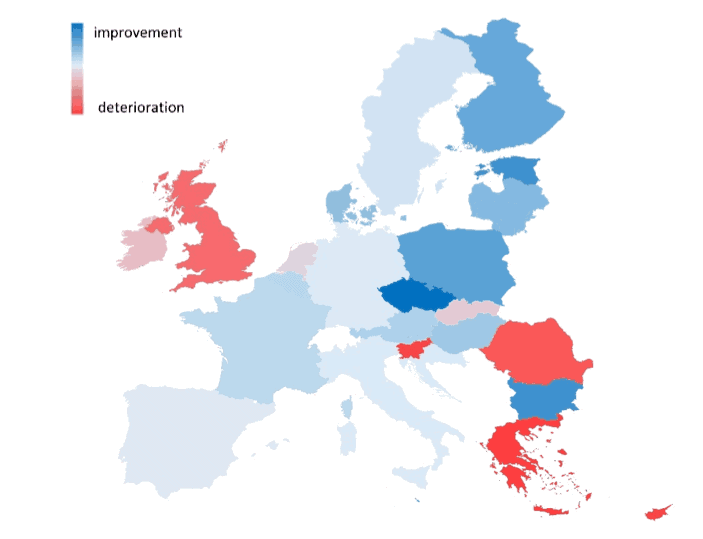 Notes: Non-wage job quality is the simple average of the five dimensions of the JQI, excluding wages

On a positive note, our results support the view that job quality and job quantity can go hand-in-hand. As shown in Figure 4, in countries where jobs were of overall higher quality in 2015, participation in the labour market, as expressed by the employment rate, was also higher. The correlation is strong and positive, and it clearly demonstrates that, across EU Member States, there is no apparent trade-off between the number of people in employment and how good their jobs are. Quite the opposite: it is possible for advanced labour markets to perform well across both dimensions—quantity and quality—if only the right mix of policies and institutions is set in place. 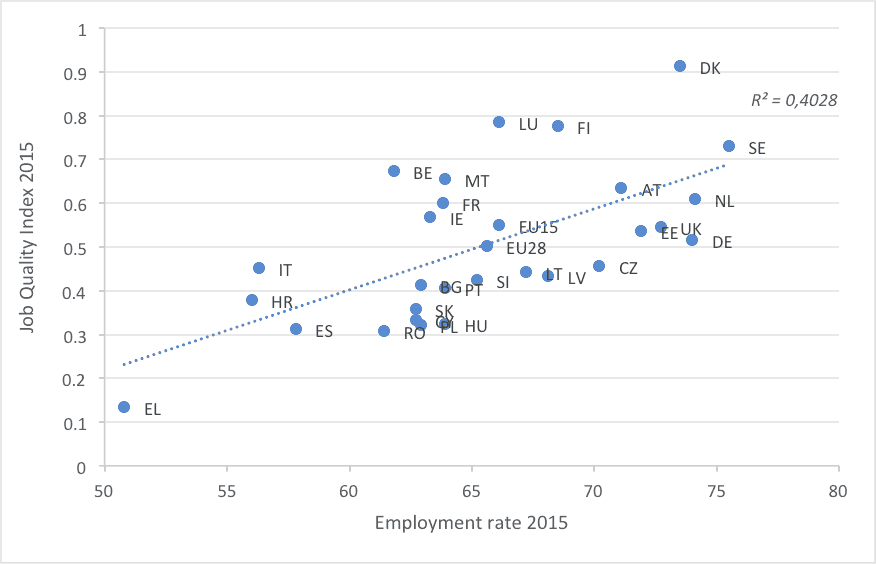 What next with job quality

In the Lisbon Strategy, the promotion of “more and better jobs” was expressed as a non-mutually exclusive objective. In some of its recent documents, the European Commission has re-stated that job creation does not need to compromise on quality. Nevertheless, the overall policy direction and countless labour market reforms introduced across the EU after the 2008 crisis seem to have followed different principles, with the deregulation of employment taking a front seat. The assumption underpinning much of the reform effort in recent years has been that less protected forms of work, associated with lower job security and often with lower wages, non-wage benefits or limited access to training, will somehow increase the chances of those outside the labour market to access paid work. Contrary to such presumptions, our analysis confirms a strong and positive relationship between the quantity and the quality of jobs.

These recent results for the European Job Quality Index also confirm that a complex phenomenon such as job quality can and should be measured. In EU employment policy, the quality of jobs remains a contested concept which has not sufficiently penetrated policy formulation, monitoring and evaluation. What is needed is a clear definition and comprehensive measurement of job quality that clearly indicates the desired direction of change and the policy steps necessary to achieve it. With this update of the JQI, we have a suitable empirical tool at hand to stimulate the policy debate on job quality at EU and national level.