The author of a report to the Council of Europe elaborates how representation gaps can be closed so politics is refreshed and reflects wider society.

Genuine progress has been made over the decades with regard to the participation of women in political and public decision-making in Europe. Women have reached high positions of power and several European countries are close to parity in their parliaments. Yet the European political landscape still remains quite socially homogeneous: politics and decision-making seem out of reach for many women of various backgrounds.

These hindrances range from multiple discrimination, the weight of prejudice, the risk of violence and the fear of stigmatisation to barriers within political parties, social pressures, the unequal sharing of care responsibilities and lack of accessibility, as well as poor consideration of women’s skills and expertise. They have been exacerbated during the pandemic—for all women, but in particular for women from under-represented groups.

Enhancing their participation in political and public decision-making requires action at several levels, with the necessary will and commitment. Society at large and political parties need to make space for women’s active engagement and provide all citizens with the tools to exercise their rights and participate effectively. An intersectional approach is needed, to ensure the political landscape comes to reflect the diversity of European societies.

Women from under-represented groups face multiple obstacles to their participation in political and public decision-making. Their access to education and services is often limited. They may be discriminated against because of their gender, gender identity, sexual orientation, colour of skin, social or ethnic origin, age or disability, among others. This is why the United Nations Committee on the Elimination of Discrimination Against Women (CEDAW) recognises that discrimination may occur on a number of grounds and that these may be cumulative.

Women bear a weight of prejudice and social and familial norms, militating against their entry into politics. Women from under-represented groups also encounter major difficulties in being placed in eligible positions on electoral lists or progressing in their political parties. Parties remain the gatekeepers for their participation in politics.

Discounting of the skills and expertise of women, by other politicians or the media, has a negative impact on their participation in politics and public life. Women are assessed differently from men, whether as potential candidates for leadership or in decision-making positions. They may themselves then think they do not have an ‘appropriate’ socio-economic or educational background. Poor self-esteem prevents brilliant women from having the confidence and self-assurance to be more active in politics and public life.

The pandemic has had a deleterious impact on equality and non-discrimination. Women from under-represented groups have been disproportionately affected and, as a consequence, engaging in politics could become even more challenging for them in the future.

Instances of good practice in several countries, in increasing women’s engagement in decision-making, may however provide a model for enhancing the participation of women from under-represented groups. This can entail:

Quotas can be a starting point for change. Quotas alone are not however sufficient to change a system. They need to be accompanied by gender-sensitive and inclusive policies, gender-budgeting and relevant legislation—otherwise they risk becoming a target, not a minimum.

Establishing women’s networks or caucuses in national parliaments (and youth assemblies) can make available the necessary support for women to increase their power and visibility. This can also inspire other women to become engaged in public life. Gender-action plans for political parties could be a useful instrument to ensure their accountability on equality.

Higher participation by candidates from under-represented groups is impossible without action to prevent and combat discrimination. Progress can only be achieved by ensuring robust accountability mechanisms in support of international commitments in this regard. Clear and strong actions to tackle hate speech, online harassment and violence against women in politics will undoubtedly contribute as well.

Financial support for non-governmental organisations working on gender equality, inclusion and the participation of women from under-represented groups in political and public decision-making will ensure that this process is sustained and productive. Increasing the economic empowerment of women from under-represented groups and improving their access to education, health and social services will also contribute, albeit indirectly, to their engagement in public and political life.

Women (and men) from under-represented groups who do participate in public life do not however only represent their respective group. They bring a new vision, a new perspective, as well as their expertise in various fields. We do not have the luxury to lose any of them.

Diversity should also make political decision-making more flexible and open to change, at national and international levels. Widened participation contributes to public trust in decision-makers, as real or perceived gaps between them and the citizens are reduced.

Nor should the burden of enhancing participation be borne only by women but by society as a whole. Institutions and political parties need to make space for women to engage and commit. It is also the responsibility of men to allow and promote change, and to prove themselves allies for gender equality. Profound structural changes are needed to ensure more participation, equality and inclusiveness in political and public decision-making.

Transforming politics and the whole society is a long and challenging process, because we are changing power relations—and we all have to take responsibility for ensuring we bring this into our personal lives. We must commit to moving that process forward, so women and men can achieve equal power to shape their societies. 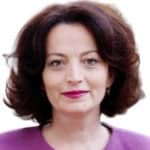 Eglantina Gjermeni is a member of the Socialists, Democrats and Greens group of the Parliamentary Assembly of the Council of Europe, chair of its sub-committee on gender equality and author of the report 'Enhancing participation of women from under-represented groups in political and public decision-making' endorsed by PACE in June 2021. A member of the Albanian parliament since 2009, and a former minister of urban development, she is head of its sub-committee on gender equality and prevention of violence against women.