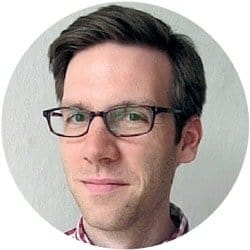 Yanis Varoufakis, the economics professor and new Greek finance minister, used a press conference with Wolfgang Schäuble last week in Berlin to issue an emotional appeal to Germans for solidarity; they, after all, knew from their experiences of the 1930s how bad the political consequences of an economic depression could be.

Are those just the “fine words” of a Greek angling after German money? Here, in Germany, we’re playing down the economic catastrophe of Greece. Yet, if you compare Weimar in the global economic crisis and Greece today, frightening similarities are soon obvious. Worse still: the Greek economy has, meantime, collapsed further and the crisis lasted longer than that of the Weimar Republic.

As the graph below shows, economic output in the Weimar Republic slumped 16% from the eruption of the global financial crisis in 1929 till 1932 – among countries hit by the crisis only the USA experienced a comparably deep slump. Greece’s crisis has so far lasted seven years and economic output has fallen even more steeply than in Weimar – by a quarter. The second graph shows how, in Greece as in Weimar, the crisis was simply made worse by a radical reduction in public spending. 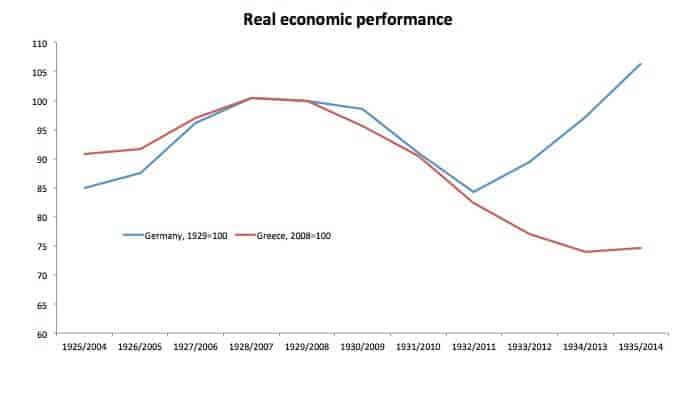 Public spending in Greece up to now has fallen by a quarter; in Weimar, up to 1932, by only a fifth. No post-war developed economy has cut government spending as much as the Greeks. Nobody can accuse the Greeks of not saving. The Germans voted in Hitler in 1933 because the established parties of those days, Social Democrats and Centre, did nothing against mass impoverishment. It was easy for him to take a stand by breaking with the international consensus on economic policy and, from 1933, hugely extending state intervention. This restored Germans to paid employment and thus legitimised Nazi rule that later led to war. European integration after World War II was supposed to ensure that the same economic mistakes would never be repeated.

In Greece today, as in Weimar those days, the large amount of saving followed most of all high external debts: Weimar was in hock to the French, British and Americans; Greece today to the other members of the Eurozone. Nobody wanted to help the Germans so long as they didn’t start seriously saving. The French in particular mocked the supposed German spendthrift. The economic historian, Tobias Straumann, found a nice quote of March 1930 in Le Figaro that commented on the collapse of the grand coalition under the social democratic Chancellor Hermann Müller:

There are no insuperable material difficulties which have prompted the end of the grand coalition. Certainly, the budget is tough, the deficit worrying. But, with a bit of energy, it should have been possible to get over a tough but by no means desperate situation. To reach this goal would have meant introducing an extremely strict savings plan, especially in social security which had become a bottomless pit. But the socialists simply wouldn’t countenance saving.

What the Germans are saying today about the rest of Europe is exactly what they were told then by the rest of Europe. Just like today in Greece, the Exchequer in Weimar was monitored externally and Germans forced to make strict savings. Without a great deal of joy.

By sticking strictly to spending cuts, now as then, and thereby worsening the crisis, the established parties have simply served to strengthen the Far Right and Left. But there’s a huge, central difference: In Greece a Left party won and its finance minister isn’t calling upon the strength of his own nation but, rightly, on an idea of Europe, the idea of mutual understanding among its peoples. If Syriza and its polyglot finance minister don’t pull it off then the country will simply stay mired in crisis. That will create more nationalism, more enmity among the nations of Europe. No European can possibly want that.

This blogpost also appeared in German on the Herdentrieb Blog of DIE ZEIT.