While Mario Draghi has stolen the show with his speech at Jackson Hole, another speech by Haruhiko Kuroda, governor of the Bank of Japan, is actually even more interesting. Kuroda’s introductory remarks are short and simple and they concern the 15 years of deflation Japan has experienced since the mid-nineties.

The key lesson is that a negative demand shock to the economy, if not handled well, will trigger mechanisms that keep the economy in a state of depression long after the initial shock has passed. In the case of Japan, the initial shock hitting aggregate demand was the bursting of a major asset bubble at the beginning of the 1990s. In turn, this has set a vicious cycle of depression and deflation in motion from the mid-1990s on. Its effects can still be felt in today’s labour market.

Here’s how Haruhiko Kuroda explains this vicious cycle in more detail: It started with Japanese firms being unable to raise sales prices because of the general lack of demand in the economy, brought about by the bursting of the above mentioned asset bubble. Firms reacted to this by cutting expenses, labour costs in particular. This took the form of businesses turning to non-regular employees whose wages can be restrained more than those of workers with regular contracts. Firms also started to drop out of the so called ‘spring offensive’ where management and trade unions at large firms come together each spring to agree to simultaneous increases in wages. With firms wanting to cut wages because of falling prices, Japanese businesses started to see to see such coordination as constituting an obstacle.

Moreover, from the late 1990’s on, nominal wages actually started to fall faster than prices, causing a large decline in the share of labour in Japanese GDP. With falling wages chasing falling prices, deflation became entrenched. However, by affecting business investment, deflation became even more ingrained in the Japanese economy. Indeed, with firms expecting their sales prices to continue to drop, the appetite to invest evaporated. Why would a company put up a serious amount of finance to invest in equipment and machinery if it knows that the future cash flows that will be generated by making this product will suffer from a trend of continuing falling prices? In that case, the rational thing to do is not to invest in machinery but to use the increase in profit margins to accumulate large amounts of cash. The latter will generate a positive real interest rate and can serve as buffers against potential future losses.

Falling investment forms the feedback loop that closes this vicious circle. Indeed, falling investment means aggregate demand in the economy will shrink further so that the downwards pressure on prices is being maintained. The economy then finds itself trapped in a deflationary equilibrium where falling prices, falling wages and falling investment sustain each other. The graph below, taken from Kuroda’s introduction, illustrates how Japanese prices and wages have closely moved together and have mutually supported each other’s deflationary trend. 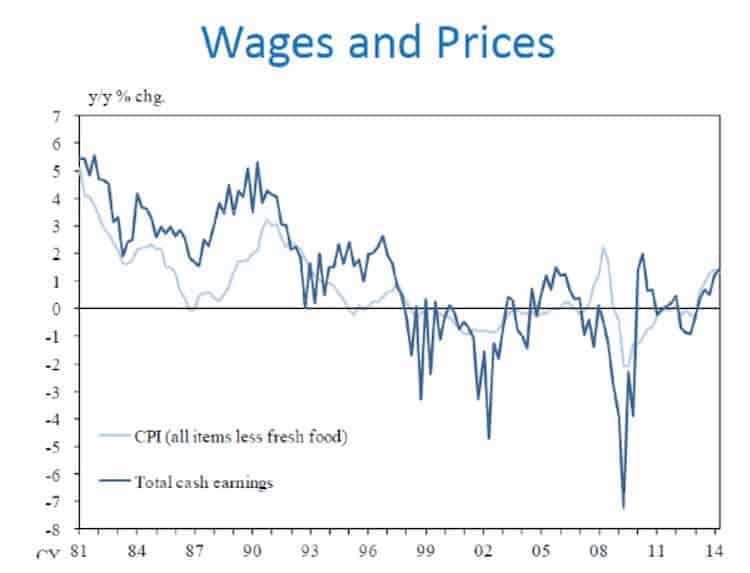 Lessons For Deflation Dummies In Europe

All of this sounds worryingly familiar for the debate here in the Euro Area. Businesses in Europe are reacting to the lack of demand and to the incapacity to impose even moderate price rises in the same way as they did in Japan. They are deeply convinced that labour costs need to be cut so that businesses can become competitive again and that, in order to do so, any wage fixing machinery that stands in the way of company based wage cuts and any labour law arrangements that protects job stability has to go.

The difference with Japan, however, is that policy-makers over there have come to realise that such a competitiveness agenda is a ‘dead end road’. That this is, what Keynes called, a ‘fallacy of composition’ where decisions that seem rational from the point of view of an individual company are simply disastrous for the economy as a whole. Surprisingly, this awareness in the circles of Japanese policy-makers even extends to its central bank.

This, unfortunately, is not the case for the ECB. Whereas Draghi’s speech at Jackson Hole seems to show that the ECB is finally (!) waking up to the danger of the Euro Area economy operating close to zero inflation, the perverse role that wage and labour market flexibility play in this process of deflation is not at all being grasped. Instead of taking the right clues from Japan by recognising that this sort of flexibility further entrenches the process of deflation and depression, Draghi’s speech is doing the opposite. In return for a vague (!) promise to ease monetary policy, Draghi is actually calling for more labour market flexibility by giving priority to firm level wage agreements over higher level agreements and by reducing job protection.

This is playing with fire. If Draghi’s flexibility agenda is indeed being pursued, then the very institutions that function as a buffer against the deflation process entrenching itself further will be destroyed. By pushing for the deregulation of labour markets and their wage fixing machinery, the President of the ECB will end up in unleashing the spectre of deflation upon the Euro Area instead of preventing it.