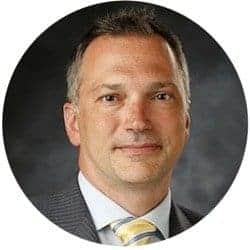 A decade on from the financial crisis and Europe is finally on a stable path towards recovery, with growing economies and robust improvements in labour market participation in all Member States. However, the long-term implications of the crisis still weigh heavy on Europe’s most disadvantaged youth.

The latest data from Eurostat reveals sustained growth in the employment rate and a decrease in unemployment rates for all age groups. In 2017, the unemployment rate for the general population decreased to 7.6%, reaching a level very close to the 7.2% observed in pre-crisis 2007. Similarly, the rate of unemployment among young people finally decreased to 16.8%, a level that it is not far from the 15.7% recorded in 2007.

Notwithstanding this remarkable improvement and the rosier scenario for labour market participation of youth, the legacy of the crisis is still visible in the substantial increase in the cohort of long-term unemployed young people. Analysis of the composition of the NEET population over time reveals that higher levels of this group recorded in 2016 were driven by growth in the cohort of the long-term unemployed. While the rates of NEETs in short-term unemployment decreased from 3.3% in 2008 to 3% in 2016, the share of those that were respectively long-term unemployed or discouraged workers increased from 1.4% and 0.5% in 2008 to 2.3% and 0.7% respectively in 2016. 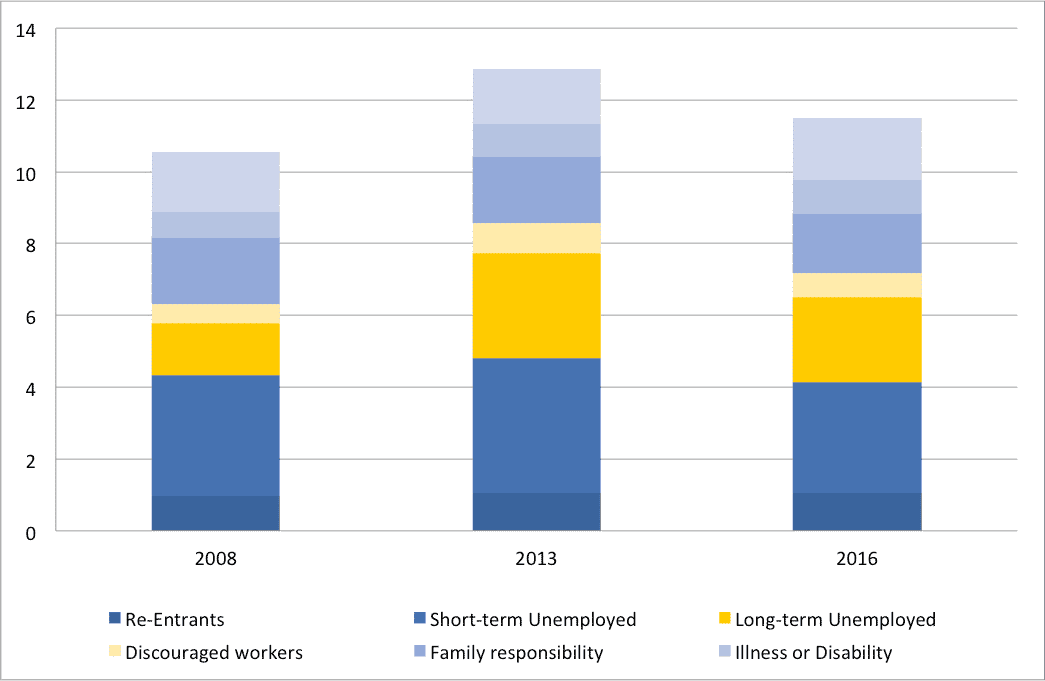 Having a large cohort of young people who suffer protracted disengagement from the labour market is not just a risk for the individual but also for the broader society.

Experiencing long-term disengagement is detrimental to the well-being and employment perspectives of young people. Recent research from Eurofound on long term unemployment among young people has shown that this has a scarring effect on a young person’s lifelong economic outcomes. The research also confirms that, while the scarring effect on employment participation tends to disappear over time, those who experienced long-term unemployment are more likely to suffer permanent damage to their earning prospects, resulting in a sizeable income penalty over the course of their lives.

Long-term unemployment dramatically affects several dimensions of young people’s well-being. In particular, it decreases overall life satisfaction and, most importantly, increases the risk of social exclusion and mental health problems. Young people who have experienced long-term unemployment are also more likely to be materially deprived compared with others in the same age group, including the short-term unemployed.

It is important to understand that the protracted disengagement of young people from the labour market results in an accumulation of monetary and non-monetary barriers that prevent young people from fully participating in society. Due to their daily confrontation with structures and institutions, the young long-term unemployed are more likely to accumulate a general disaffection with and resentment against society as a whole and with political actors.

This is the “discontent of declining expectations”, as defined by Allan Larson, of young people who have made costly investments in their education but still are struggling to enter the labour market and to achieve the same working and living conditions as their parents.

The term ‘Youthquake’, which is defined as a significant cultural, political, or social change arising from the actions or influence of young people, was declared 2017’s word of the year by Oxford Dictionaries. This term came into popular use following the increased political participation of young people during the UK election, reversing a long trend of political apathy and lower participation rates among them.

While any increased participation in society by young people is very beneficial overall, it can manifest itself in various ways. As early as 2012, Eurofound alerted to the likelihood that resentment and mistrust in institutions accumulated during the crisis due to lack of jobs were likely to take on a political dimension, driving young people’s response to the crisis towards open support for opposition or illiberal forces and anti-establishment parties. The discontent behind Youthquake has no defined political direction in Europe; in the UK it took the direction of progressive forces, in the latest 2018 Italian elections more than 60% of young Italians voted for anti-establishment parties such as the Five Star Movement and Lega Nord.

Long-term youth unemployment is certainly not a new policy challenge for Europe and Member States have been quite active in implementing initiatives targeted at those furthest from the labour market.

However, re-integrating long-term unemployed young people is not an easy task given the many levels of disadvantage they are more likely to face. This group has specific characteristics: they are more likely to be male, indigenous nationals, and to lack work experience and education. They are also likely to experience multiple disadvantages, with a disproportionate amount having a difficult family environment and possible health issues.

For this reason, a holistic, individualised and young-people-centred approach is crucial for bringing young people back on track. This would require a broader approach to boosting the employability of youth, including elements such as counselling, mentoring, referral to specialised support services, tailor-made training and job placements, as well as flexible and sustained support through all stages of the programme.

All these measures should be put in place as part of the Youth Guarantee. However, despite the numerous efforts put in, the size of the cohort indicates that long-term unemployed youth are those for whom the Youth Guarantee – now five years in place – and the Long Term Unemployment Initiatives have yet to prove effective.

As the aim of the Youth Guarantee is to prevent the long-term disengagement of young people, such a large cohort of young people who have been unemployed for 12 months or more reveals that additional efforts are required from Member States and the European Commission in order to fully implement its provisions and effectively support young people in their transition to the labour market.