The wage share has been falling across the world as inequality has increased in recent decades. A co-ordinated rise is needed, starting in Europe, to reverse that. 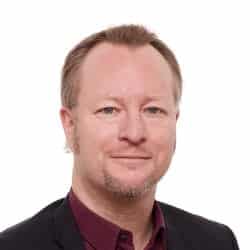 Old economic ‘truths’ are being re-evaluated by economists and international organisations. Obsolete thoughts—such as that an equal income distribution is a threat to growth—have been replaced by a growing concern about widening income gaps and their negative consequences for macroeconomic performance and political stability. It should now be clear to everyone that inequality is bad for business and becomes a breeding ground for populists and protectionists.

Inequality will however continue to grow until politicians and trade unions put a stop to it. The Swedish economist Per Molander describes this in his book The Anatomy of Inequality: ‘Without an active distribution policy, society moves as relentlessly toward the inequality limit [where a small elite control the entire economic surplus] as a stone plummets to the ground when dropped, falling with each moment that passes unless it encounters some resistance.’

It is obvious that wages play a key role in income distribution. The potential role of wages as a driver of growth is less accepted, however, at least among mainstream economists and business leaders. But those who see wages merely as a cost are underestimating wages as the source of demand, sales and so production. Therefore, we need to talk about the income distribution between labour and capital.

Wages as a share of gross domestic product (GDP) have fallen all over the world since the late 1970s. According to the International Labour Organization, the wage share has declined in 91 out of 133 countries, including most advanced and many developing economies. The profit share has risen correspondingly. Data from the Organisation for Economic Co-operation and Development (OECD) and the International Monetary Fund show a similar trend. Wages have simply been disconnected from productivity growth. During the same period, income spreads have also widened. 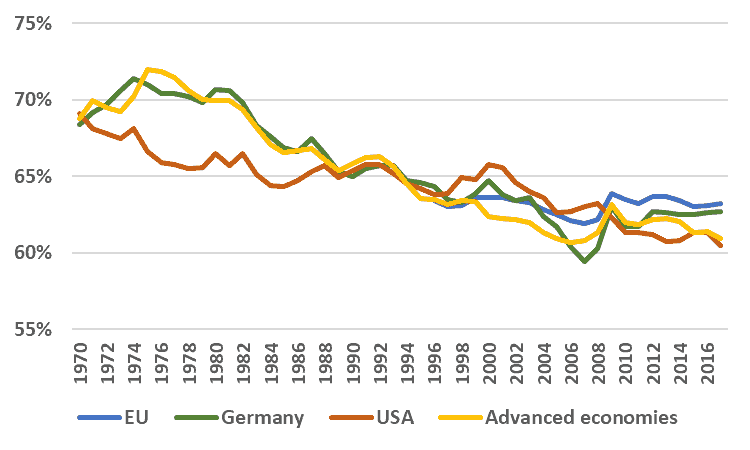 A higher wage share would, according to several empirical studies using post-Keynesian models, increase domestic demand in virtually all countries. In most, this positive effect would exceed the potentially negative effects on investment and net exports, resulting in higher growth. This is particularly true for larger economic areas such as the EU since the member states mainly trade with each other.

For most households, wages are the sole source of income. And the propensity to save, rather than consume, is higher from capital income than wage income. Therefore, a higher wage share will have a greater positive effect on demand and consumption compared with higher profit shares increasing capital income for the few—which have not resulted in corresponding increases in investment. Higher real wages, on the other hand, promote labour productivity.

Wage ‘moderation’ thus hampers growth in most, although not all, economies. But those economies which would benefit from wage restraint, by boosting net exports, depend on other countries´ domestic demand. If their trading partners also suppress wages, there will be no increase in net exports.

With wage increases no longer driving growth, two other growth strategies have emerged. The first is a debt-led strategy: household consumption is driven by rising debt, as well as asset, including real-estate, bubbles. The second is an export-led strategy: growth is driven by net exports, boosted by suppressed wages and depending on a beggar-thy-neighbour policy. The consequences are growing global imbalances and increased risks of financial crises.

One might argue that a wage-led growth strategy, with the purpose of increasing consumption, is not compatible with the battle against climate breakdown. Obviously, the production and transport of goods and services must be adapted to our climate goals, regardless of growth strategy. But we do not protect the climate by allowing widening income gaps—thereby risking growing support for populist movements which often deny climate change and want to stay out of international co-operation.

According to mainstream economics, globalisation and technological progress are the key factors behind the falling wage share, meaning there is little we can do to change the situation. In this perspective, continuing international integration and automation will unceasingly increase the pressure on the wage share.

But recent studies, based on a political-economy approach, point to institutional and social factors. Wages are set in negotiations and workers´ bargaining power has, for several reasons, weakened since the 1980s.

Therefore, it is absolutely possible to restore the wage share with the right policies. Sweden is a good example.

Swedish workers still have a strong bargaining position. Even if income gaps are growing in Sweden too, it is not because of growing wage gaps. Real wages have increased by 60 per cent over the last two decades, benefiting all workers. The wage share, which initially fell with the global trend, has increased, albeit modestly, while maintaining a top position among the world’s most competitive economies. This has been combined with the highest employment rate in the EU. This is one reason why Swedish trade unions regard globalisation, technological progress and free trade as opportunities, rather than threats.

The necessary reforms reflect the reasons why the wage share has fallen. We need to restore the balance of power between the social partners. In short, this means:

The positive effect on growth is greater for each country if several countries raise their wage share simultaneously because of the synergies involved. There is more to win and less to lose for everyone if there is a co-ordinated increase of the wage shares. But many countries find themselves stuck in the ‘prisoners´ dilemma’, where no one wants to go first out of fear of losing competitiveness and investment to others.

Therefore, big advanced economies—preferably the EU as the European Trade Union Confederation has argued—or countries with large current-account surpluses should take the lead and raise their wage shares. Small and open economies can then follow suit. This requires a more internationally co-ordinated trade union movement and co-ordinated political reforms.

In a globalised world, wages must also be discussed across borders. One forum for this is the Swedish initiative Global Deal, now handed over to the OECD, which promotes effective social dialogue. The objectives are to increase productivity, reduce inequality and enable everyone to benefit from globalisation.

An internationally co-ordinated raising of the wage share may sound like a ‘mission impossible’. Yet wage shares have moved in a synchronised way—falling—for decades. And if we avoid this challenge, are we then willing to accept the current situation?