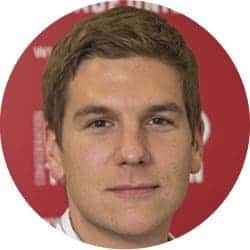 Since award-winning physicist Stephen Hawking first warned that artificial intelligence (AI) could spell the end of humanity, other experts have echoed his cataclysmic forecast. In the meantime, for many workers, the day-to-day impact of digital technologies is much more pedestrian, if sometimes almost as threatening. Yet, alongside the risks, trade unions believe that if managed in the right way, digitalisation could offer new and less arduous job opportunities and better working conditions.

At present, however, online platforms, robotisation and crowdwork are increasing the likelihood of job destruction in industry, precarious work with no social protection, labour market segmentation, involuntary self-employment and lack of employer accountability; workers’ rights and the ability of trade unions to organise and represent the most vulnerable are being undermined.

Digitalisation is on everyone’s lips, often spoken of as an irresistible force for change. We are told that in its scale, speed and complexity, the Fourth Industrial Revolution (Industry 4.0) is unlike anything humankind has experienced before. These changes are transforming the nature of work in Europe and around the globe.

But does that mean they cannot be managed? Trade unions believe they must be, and are mobilising together to that end. Radical developments in society seldom prioritise the public good and, as in previous industrial revolutions, it is workers and trade unions that must fight for social regulation and governance in the interests of ordinary people. Industrial revolutions are unfair by nature and social justice does not fall from the sky. Far from living in the past, unions are active in anticipating change and meeting the challenges it throws up. That is our role. It is in our DNA. Who will represent workers’ interests otherwise? Without trade unions, they would face a very bleak future.

Digitalisation, robotisation and AI give rise to important questions about responsibility and accountability. Platform work and self-employment break the traditional chain of command between employer and worker. In the absence of any contract, who is responsible for social protection, insurance and safety? Bicycle delivery workers, for example, are especially vulnerable: “In the event of an accident or injury, we’re completely alone and have no access to legal help or sick pay,” said one Deliveroo rider in central London. Who is ultimately responsible for programming AI, if something goes wrong? We insist that human beings must keep control and be accountable for the actions of robots and AI, and this must be adopted as a fundamental ethical principle. People – and specifically the social partners – must agree on and apply the rules.

Digitalisation will impact on public services, such as health and social care and employment services, with public authorities tending to adopt the role of intermediaries between providers and ‘clients’. It is very important to keep public good as the main objective and recognise that in some instances, human contact is crucial. Social dialogue is necessary to ensure that digitalisation does not damage either working conditions or standards of service.

We recognise the potential benefits. For example, digitalisation offers opportunities for a better work/life balance, but only if implemented by mutual consent – not if it demands unlimited flexibility and round-the-clock availability. So-called ‘Cobots’ can lighten heavy tasks, but people must be in control. Experts predict an additional 1.3 million data workers in Europe by 2020, while new sectors such as 3D printing – growing at 30% a year – are booming. 3D printing can save huge amounts of raw material in industry, but throws up questions of health and safety and liability. The World Economic Forum predicts that 65% of children starting primary school today will end up doing jobs that do not yet exist.

We must avoid a worst-case scenario of robots replacing humans and generating massive job losses. Digitalisation has to work for the benefit of people – and just as workers participate in decision-making in conventional company structures, through works councils and workers’ board-level representation for example, ways must be found to give them a say in the way digitalisation and robotisation impact on their life at work.

Online platforms must conform to existing EU employment legislation, together with new measures arising from the forthcoming European Pillar of Social Rights: in particular the revision of the EU Written Statement Directive. Also, we as unions must give these platform entrepreneurs a chance and try to establish a dialogue with them and ensure they are open and accountable. We want to encourage a public debate to make citizens and consumers more aware of the issues at stake, and encourage them to assess the way workers are treated by platforms, when they use them. Rules must be imposed to avoid social dumping inside the sectors, and to ensure that digital companies contribute to social wellbeing through fair taxes on profits and their turnover made in Europe. 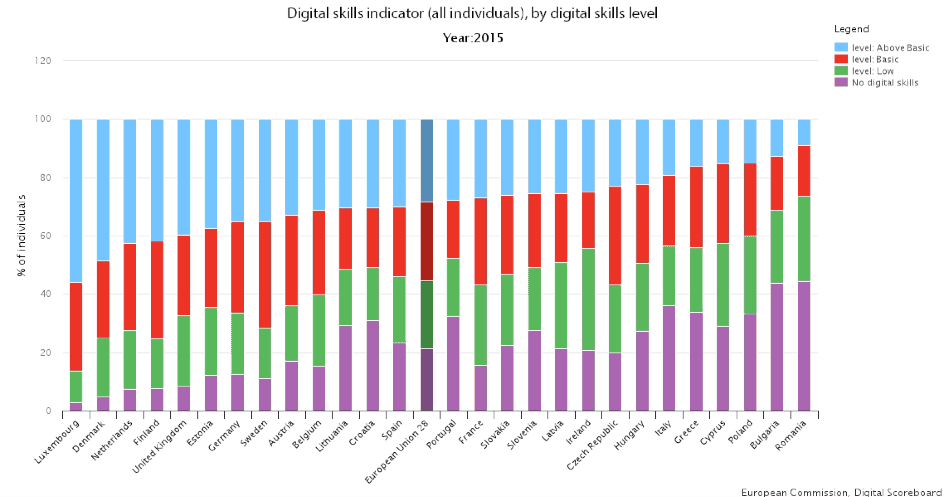 The EU has a crucial role to play on this EU-wide topic. Global online platforms often by-pass national regulation, so a Europe-wide framework of rules is the best way to establish a level playing field with respect for workers’ rights. The Union must also prevent a ‘digital divide’ creating inequalities not only between countries and regions, but also between sectors of society: rich and poor, men and women, young and older people, highly and less qualified. The graph above illustrates that in 2015 more than 20% of EU citizens had no digital skills at all, and national variations were wide. The best way to guarantee cohesion is through investment in education and training, infrastructure and social dialogue. A ‘just transition’ to digitalisation means not leaving large portions of the population behind. In the meantime, more research is needed to examine the impacts of digitalisation, especially on employment.

The ETUC is about to launch a series of initiatives to collect and exchange policy ideas, experience and knowledge, working together with the European Parliament and European Economic and Social Committee to develop realistic solutions.

We do not want to frighten people by highlighting the dangers of digital evolution. But there are choices to be made, and systems must not be left to develop in a regulatory vacuum. Trade union mobilisation is vital, for, as our forebears found in the 19th century, if we wait until this new Industrial Revolution is complete, it will be too late. I see more and more colleagues in the unions who are even considering the 4th industrial revolution as an opportunity to lay new foundations for the trade union movement. Let us be ready to respond to this exciting challenge.