Everyone knows that the Eurozone suffered a crisis from 2010 to 2012, as periphery countries could no longer sell their debt. A superficial analysis puts this down to profligate governments, but look more closely and it becomes clear that the formation of the Euro itself led to an excessive monetary stimulus in these periphery countries. This is widely understood.

But this is not the whole story. It leaves out one key element that is vital if we are to understand the situation today. Here is a chart of nominal wage growth (compensation per employee) in the Eurozone and selected countries within it before the Great Recession. 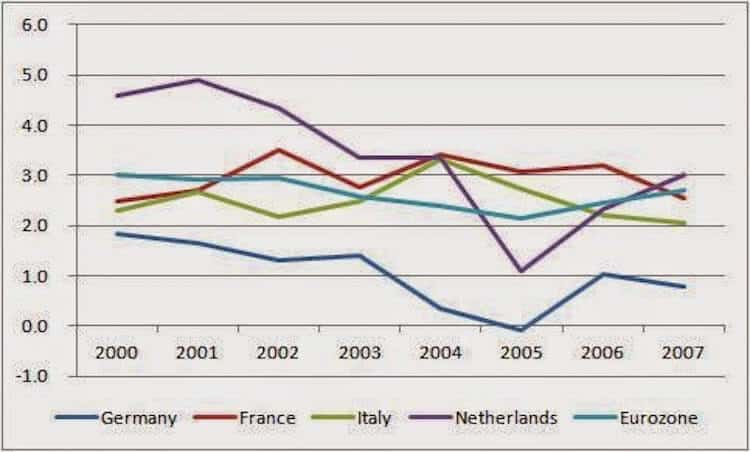 Between 2000 and 2007 German wages increased by less than 10% compared to over 20% in the Eurozone as a whole (which of course includes Germany). This difference was not primarily caused by excessive growth in the periphery countries: wages in France, Belgium, the Netherlands, Italy and Spain all increased by between 20% and 30%. The outlier was Germany.

Of course growth in nominal wages of less than 2%, and sometimes less than 1%, is not consistent with a consumer price inflation target of close to 2%. It was for this reason that the ECB lowered short term interest rates from 4.4% in 2000 to 2.1% in 2004. They were not worried by excessive inflation in the periphery – they had to lower rates to counteract the effect of low nominal wage growth in Germany.[1]

So the reason why Germany seems to have largely escaped the second Eurozone recession of 2012/3 is that it pursued (perhaps unintentionally) a beggar my neighbour policy within the Eurozone. Low nominal wage growth in Germany led to lower production costs and prices, which allowed German goods to displace goods produced in other Eurozone countries both in the Eurozone and in third markets. This might make sense if Germany had entered the Eurozone at an uncompetitive exchange rate, but my own analysis suggests it did not, and Germany’s current relative cyclical position and its current account surplus confirm this.

As I argued in an earlier post, I do not think this divergence in cyclical position is the main reason why Germany resists expansionary measures in the Eurozone. But it is a lot easier to take up these obstructive positions when you are benefiting from this beggar my neighbour policy, and other countries that have suffered as a result appear not to understand what you have done.

[1] One of the comments on my earlier post tried to justify this beggar my neighbour policy using the following argument. Although the ECB’s inflation target was close to 2%, they suggested that inflation below this was clearly desirable. What the Eurozone provided was an incentive system to try and achieve below target inflation by becoming more competitive. Germany had successfully risen to this challenge, and now it was up to other countries to try and do the same. Now if this competitiveness had been achieved by improvements in productivity, then this idea – although still mistaken – would be worth discussing. When it is achieved by cutting nominal wages (such that real wage increases are below productivity growth), it is not clear what efficiency gains are being achieved.

This blog was first published on Mainly Macro