Denying vaccination to Africa was always bound to rebound on the global north.

My grandfather, Nelson Mandela, inspired me to dedicate my life to our continent. He focused on political apartheid, whose apparatus included the pass laws, successfully striving to bring it down. Yet today much of the developed world overlooks or belittles Africa.

When the world at large become aware of the Omicron variant, the response of wealthy nations included reintroduction of travel bans. While not surprising, this was nevertheless disappointing, as the New York Times reported. The response of supposedly enlightened countries revealed that few had learned the deeper lesson of the pandemic.

Failure to make vaccines widely available in the global south meant that while much of the north had been trying to return to normal over the last several months, the coronavirus kept circulating. It was not only infecting tens of millions but evolving as well, developing mutations which presented new dangers, as with the emergence of Omicron.

In sub-Saharan Africa especially, this was exacerbated by the enduring effects of the AIDS epidemic, which, as the World Health Organisation (WHO) finds, has resulted in huge immuno-compromised populations. Moreover, continued uninterest in vaccine equity only reinforced the mistrust which results in widespread scepticism about vaccines, even where these have been available to Africans.

Indeed, Africans are not uninformed. They understand that while the developed world enjoys such an excess supply of vaccines that a second booster shot is a common proposal, their own countries struggle with uneven access to medical expertise, to say nothing of weak governmental efforts and low vaccine availability.

At the turn of the year, the WHO announced that the goal of vaccinating 40 per cent of Africans would not be met. While sometimes aspirational goals go unrealised, it is shocking how far some major African countries are falling short. Indeed fewer than 10 per cent of Africans have been ‘fully vaccinated’, a treacherously low proportion.

While the Indian Ocean states of the Seychelles and Mauritius have achieved vaccination rates of 70 per cent and Morocco has hit 62 per cent—comparable to the United States—no other African country has cleared 50 per cent (Tunisia, Botswana and Rwanda have exceeded the 40 per cent target). Eritrea has not even begun a vaccination programme.

Then there are the economic consequences of the pandemic. According to the United Nations Development Programme, in 2030 eight out of ten people consequently pushed below the poverty line will be living in the world’s poorest countries, many in Africa. Meanwhile, one assumes, the global north will have long since recovered. Inequality will continue—it may even increase.

The cultural consequences should have been equally foreseeable. It is undeniable that there is a great degree of vaccine mistrust in Africa, including in South Africa. But we must appreciate the background to it—which includes the legacies of colonialism, neo-colonialism and apartheid.

Will the global north’s indifference to Africa reinforce mistrust of medical expertise? This would be a horrible outcome—not least because anyone who thought that the consequences today of those long eras of mistreatment could be neatly geographically contained was clearly mistaken.

Sustained aid and assistance could equally begin to unwind this legacy. And fortunately, the world is not wholly immune to the lessons of history. Rising powers in the global south are stepping in to fill the void left by a receding dominant order.

In an interview with Arab News, the Saudi ambassador to the United Nations underscored that ‘we will not be able to defeat this pandemic until and unless we defeat it everywhere’, adding that ‘we are not safe until everybody is safe’. Saudi Arabia has committed $500 million to addressing global vaccine inequity and is promising ‘hundreds of millions’ more. Included is a $150 million gift by the kingdom to GAVI, the Vaccine Alliance.

Likewise, China has made vaccine inequity a major focus of its foreign policy and aid. In November, China held an important conference, the China-Africa Forum, during which its government pledged one billion vaccines for Africa. (Subtracting the 9 per cent of Africa that is fully vaccinated, there are roughly 1.1 billion people left to inoculate—China could help us reach almost all of them.)

This Saudi Arabian and Chinese spirit contributes to a more intelligent, prudent and successful approach to fighting the pandemic. After all, the world has tried unilateral approaches. As Omicron painfully proves, these are at best half-measures, ultimately doomed to failure. The right approach is collaborative and international.

The UN eventually did step forward to co-ordinate an end to the AIDS explosion. Hopefully, it can assume that role again. For no one region of the world can solve this crisis without the participation of all others.

While recent research suggests Omicron is less dangerous than previous variants, it is more infectious, causes breakthrough infections and still results in many hospitalisations and even deaths—especially given how many people have yet to be vaccinated or convinced of the need to be. The entire world must confront the possibility of further prolonged lockdowns, closures and major disruptions.

By embracing the other—even the other who harmed him and his people—my grandfather opened the door to a new South Africa. We South Africans are always willing to partner with the well-intentioned, to come up with effective and long-term solutions that keep all people, wherever they are, safer and healthier. Omicron was not as dangerous as we feared, but the underlying dynamics that enabled it continue to obtain.

We have no guarantee we will be so lucky next time. We can be sure, though, at this rate, that there will be a next time. 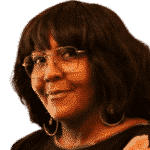 Ndileka Mandela is a writer and activist, one of South Africa's best-known feminists. Her discussion of past rape was an important moment in the #MeToo movement in SA. In 2014 she founded the Thembekile Mandela Foundation to tackle rural education, health, youth and women’s development around the world.