The differing paths of the states which emerged after the fall of the wall show how liberty and the rule of law go hand in hand.

Nineteen eighty-nine was among the most fateful years, in Europe and in Asia. Estonians, Latvians and Lithuanians joined hands to form a 600-kilometre human chain, stretching from Estonia in the north to Lithuania in the south. Two million people holding hands—every fourth man, woman, and child in the Baltic countries formed a chain to stress their yearning for freedom and independence.

Half a century earlier, in 1939, the Hitler-Stalin non-aggression pact had led to Soviet occupation of the Baltic states. In their battle for the restoration of independence, song was an important weapon of the Baltic peoples, beautifully captured in the documentary film The Singing Revolution. The demonstrators surmised that even the Red Army would not attack people while they sang.

Hardliners in the Kremlin advocated clamping down on the Baltic states with military force—as had been done in Berlin in 1953, Budapest in 1956 and Prague in 1968—but this time their views did not carry the day. Fresh winds were blowing in Moscow under the Communist Party’s new general secretary, Mikhail Gorbachev.

Around the same time, a few hundred East Germans fled their country through a small rift on the border between Austria and Hungary. As this escape triggered no response from the USSR, thousands more followed. The Hungarian government reacted by opening the country´s borders. The dam had broken.

In Poland, the Solidarity movement had managed in the spring of 1989 to break the political monopoly of the Communist Party. In June, in the first free elections since 1928, Solidarity won every seat bar one in parliament that was not reserved for the Communist Party. Later, in December, Nicolae Ceauescu was summarily deposed in Romania and, with his wife, Elena, shot like a dog.

The following year, after free elections in East Germany, the two German states were reunified. Other Communist countries in east and central Europe reclaimed their independence one after another, without Russia doing a thing. After a botched coup attempt by eight Kremlin insiders, the Supreme Soviet formally dissolved the Soviet Union before the end of 1991. The game was up.

Suddenly, the number of the world´s democracies increased by more than 20—the 15 former Soviet republics plus the former satellite states, all of which strove to become fully-fledged democratic, market economies. Bulgaria, the Czech Republic, Croatia, Hungary, Poland, Romania, Slovakia and Slovenia joined the EU. Albania, Montenegro, North Macedonia and Serbia are still kept knocking on the door.

Of the 15 former Soviet republics, only the three Baltic countries decided to join the EU and only there did the dream of democracy and the rule of law materialise. The democracy scores awarded the Baltics by Freedom House are now 87/100 in Latvia, 91 in Lithuania and 94 in Estonia—compared with 30 on average for the others. Georgia, Moldova and the Ukraine are in a special position in that the European Parliament resolved in 2014 that they could apply for membership—an assessment reflected in their current democracy scores, in the range from 58 to 63, far above the Russian tally (20).

The World Justice Project, an independent, multidisciplinary organisation, assessess the rule of law worldwide as experienced and perceived, based on more than 120,000 household and 3,800 expert surveys. Its assessments centre on constraints on government powers, absence of corruption, open government, fundamental rights, order and security, regulatory enforcement and civil and criminal justice. The project gives Russia and seven other former Soviet republics an average grade of 51/100, compared with 81 for Estonia. Freedom and the rule of law go hand in hand.

These events could have played out quite differently, resulting in a bloodbath with continued oppression and ferocity rather than freedom, peace and a democratic awakening. While they didn’t in Europe, they did in Asia.

Far away, students gathered in Tiananmen Square in Beijing in June 1989 to plead for democracy. The government mobilised 300,000 soldiers to dissolve the demonstration with armed force. The government claims that 300 lives were lost but other estimates are closer to 3,000. These events remain taboo in China and schoolchildren do not learn about them.

Once again democracy is under stress. The people of Hong Kong are engaged in a courageous battle for justice in the city-state, which was a British colony enjoying unfettered democracy and human rights until 1996. With their respective Freedom House and World Justice Project scores of 59 and 77, they now face unwelcome intrusions by the Communist regime in Beijing—whose scores are 11 and 49.

Two million people have participated in the demonstrations. The population of Hong Kong is 7.4 million. So once more every fourth inhabitant in a region is demonstrating against the central government. Will the outcome once again be violent, with the skirmishes which have already taken place? Let the Baltic countries set an example for Hong Kong. 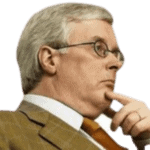