This might seem easy. The depreciation immediately after Brexit, plus subsequent declines in the number of Euros you can buy with a £, are pushing up import prices which feed into consumer prices (with a lag) which reduce real wages. But real wages depend on nominal wages as well as prices. So why are nominal wages staying unchanged in response to this increase in prices?

Before answering that, let me ask a second question. Why hasn’t the depreciation led to a fall in the trade deficit? Below are the contributions to UK GDP from the national accounts data. Net exports are very erratic, but averaging this out they have contributed nothing to economic growth since the Brexit depreciation. 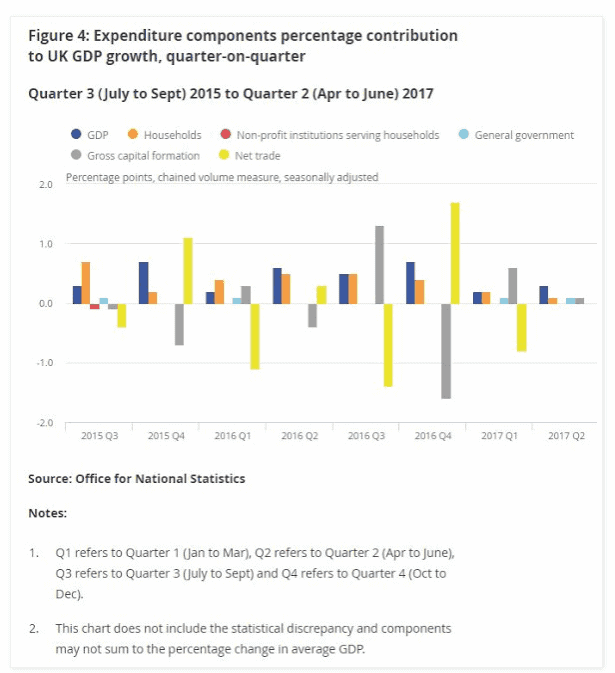 While this helps account for the lack of improvement in net trade, it increases the puzzle over why nominal wages are not responding to higher import prices. If exporting firms profits are rising because of the depreciation, why not pass some of that on to their workers?

One perfectly good answer is that the labour market is weak, and what has stopped real wages falling further is that firms do not like to cut nominal wages. In these circumstances there would be no reason for exporters to share their higher profits with their workforce. So the immediate impact of the depreciation has not been a decline in the terms of trade (export prices/import prices), but instead a shift in the distribution between wages and profits. But many people believe that, with unemployment falling rapidly, the labour market is not weak.

There is another reason why exporters might be increasing profits but not sales, and not passing higher profits on to higher wages, which goes back to a point I have stressed before. We need to ask why the depreciation happened in the first place. To some extent the markets were responding to lower anticipated interest rates set by the Bank of England, but there is more to it than that. Brexit, by making trade with the EU more difficult, will reduce the extent of UK-EU trade. Furthermore there are two reasons why Brexit is likely to reduce UK exports by more than UK imports.

The first is specialisation. Because countries tend to specialise in what they produce, they may not have firms that produce alternatives to many imports, making substitution more difficult. The EU produces many more varieties of goods than the UK, so they are more likely to be able to substitute their own goods to replace UK exports. The second is the importance for UK exports of services, and the key role that the Single Market has in enabling that. On both counts, to offset exports falling by more than imports after Brexit we need a real depreciation in sterling. Exporters will have to cut their prices in overseas currency terms, and a depreciation allows them to do this.

Of course Brexit has not happened yet. We still get a depreciation because otherwise holders of sterling currency would make a loss. So firms do not need to cut their prices in overseas currency yet, allowing them to make higher profits. But these higher profits will be temporary, disappearing once Brexit happens. It would therefore be foolish to raise wages now only to have to cut them later when Brexit happens (no one likes nominal wage cuts). To restate this in more technical language, when Brexit does happen the UK’s terms of trade will deteriorate as a response to export volumes falling by more than import volumes. Firms are in a sense anticipating that decline in the terms of trade by not allowing nominal wages to rise to compensate for higher import prices.

So before Brexit happens we are seeing a distributional shift between wages and profits, but once Brexit happens profits will fall back and we will all be worse off. For Leave voters who think this is all still just ‘Project Fear’, have a look at the national accounts data release that the chart above came from. It shows clearly that UK growth in the first half of this year has been slower than that in the US, Germany, France, Italy and Japan by a wide margin. What Leave campaigners called Project Fear is real and it is happening right now, but do not expect your government or some of your newspapers to tell you that.