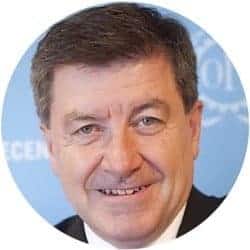 The United Nations 2030 Agenda for Sustainable Development commits UN member states to “leave no one behind.” One crucial component of that commitment – encompassed in the International Labor Organization’s own agenda – is decent work for all. At a time when worker frustration and disillusionment is being expressed in elections across the world, this goal could not be more important.

Nowadays, the expectation that each generation will be better off than the previous one, both socially and economically, is no longer automatic. For many, downward mobility has become the new normal.

Little wonder, then, that long-simmering frustration with the way globalization has been handled and resentment at the unfair distribution of its gains have fueled the political backlash sweeping the world of late. This disillusionment arises, at least partly, from people’s own experience of work, whether exclusion from the labor market, poor working conditions, or low wages.

In many parts of the world, including some European countries, unemployment has been persistently high in recent years. But even having a job is no guarantee of financial security: many employed people know that their jobs are vulnerable, and there has been inadequate progress in job quality, even in countries where aggregate economic indicators are improving.

According to the ILO’s global wage report, Wage Inequality in the Workplace, published last month, global wage growth has decelerated since 2012, from 2.5% per year to 1.7% in 2015 – its lowest level in four years. Remove China, which experienced particularly rapid wage growth, and annual growth in global wages dropped from 1.6% to a mere 0.9%.

Workers’ disillusionment is deepened by the knowledge that, as their average wages grow slowly or stagnate, the very wealthy are growing significantly wealthier. As the ILO’s report shows, while wages have climbed gradually across almost the entire income distribution in most countries, they have risen sharply for the top 10%, and even more for the top 1% of employees.

We are now faced with the twin challenges of improving the lot of those at the lower end of the wage distribution, while creating enough new high-quality jobs for the tens of millions of new labor-market entrants each year. With the global economy having yet to recover fully from the global economic crisis that began a decade ago, meeting these challenges will be no easy feat.

Indeed, it is likely that labor-force growth will continue to outstrip job creation. That is why the ILO’s World Employment and Social Outlook – Trends 2017 projects that just over 201 million people worldwide will be unemployed this year, with another 2.7 million joining their ranks in 2018.

The world needs economic growth that is more sustainable, equitable, and job-rich. The key to success will be strong and relevant labor-market institutions, which rely on and advance internationally accepted principles and rights for workers.

Minimum wages and collective bargaining can play an important role here. One remarkable trend of the last few years has been the adoption or increase of minimum wages by countries hoping to mitigate inequality, with Mexico being the most recent example. And the trend is set to continue: South Africa, for one, is also considering adopting a national minimum wage.

This is good news. Recent evidence, including by the Minimum Wage Commission in Germany, shows that well-designed minimum wages – which meet the needs of workers and their families, while also accounting for economic conditions – can make a real difference at the lower end of the income distribution, without significantly harming employment.

Action can also be taken at the international level, by implementing support systems to help advance key goals relating to decent work and economic inclusiveness. That is why the ILO and the World Bank have launched a Global Partnership for Universal Social Protection, which aims to ensure that social safety nets – including pensions and parental, disability, and child benefits – are made available to all people, covering the hundreds of millions worldwide who are currently unprotected.

Expanding access to decent work opportunities is the most effective way to increase labor-market participation, lift people out of poverty, reduce inequality, and drive economic growth. It should be at the center of policymaking. The alternative is a dog-eat-dog world in which too many will feel left out. One need look no further than today’s headlines to see the instability and insecurity that can result – and has resulted – from this approach.