This is an interesting idea and I think that it will gradually become more popular. The idea is simple: the presence of the ideology of socialism (abolition of private property) and its embodiment in the Soviet Union and other Communist states made capitalists careful: they knew that if they tried to push workers too hard, they might retaliate and capitalists might end up by losing  all.

Now, this idea comes from the fact that rich capitalist countries experienced an extraordinary period of decreasing inequality from around 1920s to 1980s, and then since the 1980s, contradicting what a simple Kuznets curve would imply, inequality went up. It so happens that the turning  point in the 1980s coincides with (1) the acceleration of skill-biased technological progress, (2) increased globalization and entry of Chinese workers into the global labor market, (3) pro-rich policy changes (lower taxes), (4) the decline of trade unions, and (5) the end of Communism as an ideology. So each of these five factors can be used to explain the increase in inequality in rich capitalist countries.

The socialist story recently received a boost from two papers. Both argue that the demonstration effect of the Soviet Union internationally (or differently, the threat of Communist revolution nationally) produced low inequality in the West. K S Jomo and Vladimir Popov write

an alternative view is…that the reversal of growing inequality followed [happened because of] the 1917 Bolshevik revolution in Russia, the emergence of the USSR and other socialist countries…

André Albuquerque Sant’Anna does more: an empirical analysis where the top 1% income share of 18 OECD countries over the period 1960-2010 is explained by the usual variables (financial openness, union density, top marginal tax rate) plus the variable created by Sant’Anna, relative military power. It is equal to military expenditures of a county as a share of USSR/Russian military spending (all annual data) interacted with the distance from Moscow. If, say, your spending is 1/10th of Soviet spending and you are close by (say, in Finland) then the threat of Soviet Union (aka Communism) will be greater, and presumably you would depress the top income share of your capitalists more than if you have the same relative spending but are Portugal. Here is the pooled cross-section and time-series graph from Albuquerque Sant’Anna: relative power of the USSR on the horizontal, top income shares on the vertical axis. 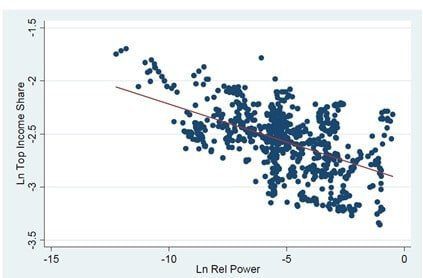 To put some additional order into that story let us consider three channels through which socialism could have “disciplined” income inequality under capitalism. The first was strictly ideological or political and is reflected in the electoral importance of communist and some socialist parties (Italy and France come to mind). The second is through trade unions (which many people have indeed included in their work). The trade unions themselves were often affiliated with communist parties (like CGT in France) or were close to Labor parties like in Sweden and the Nordic countries in general. And then, you had the “policing” device of the Soviet military power.

I think that one should keep these three channels separate. Ideally, one should treat them also empirically as different, although we should note that Albuquerque Sant’Anna does adjust for trade union density. Since the relative power variable still comes out as robustly negative (the greater the relative power of the Soviet Union, the lower the top income share) he is right to conclude that the Soviet Union’s influence is separate from the influence of trade unions. Also, one should keep in mind that the period after 1991, that is after the dissolution of the Soviet Union, is fundamentally different. Not only was there a decrease of Russian military spending compared to what it was under the Soviet Union but that spending no longer had the “Communist” connotation which is, according to the argument in the paper, what kept capitalist countries “on the straight and narrow” path of equality. Perhaps using a dummy variable would help.

Going back to the three possible channels of influence, I do mention them in my forthcoming book (Global inequality, Harvard University Press), but unlike Albuquerque Sant’Anna, I do not do an empirical analysis. I also see them as one of the contributory factors to the Great Levelling. I do not think that they were the only factor (no more than I see the accelerated technological progress, or globalization, as the sole factors behind the inequality reversal since the 1980s). Actually, I argue (but I am not going to give away the whole story here in a blog) that the Great Levelling was driven by the political forces emphasized by Piketty (war destruction, high taxation, hyperinflation) as well as by the “benign” economic and demographic forces emphasized by Kuznets (increase in the education level combined with a reduction in the education premium, aging of the population and thus greater demand for redistribution, end of the transfer of labor from rural to urban areas). There is a way that they can be “reconciled” but to see that you will have to buy the book next year.

Here I want, however, bring to the fore the work which looks at the whole issue somewhat differently, and does this in a sense from a very global perspective. Indeed Communism, was a global movement. It does not require much reading of the literature from the 1920s to realize how scared capitalists and those who defended the free market were of socialism. After all, that’s why capitalist countries militarily intervened in the Russian Civil War, and then imposed the trade embargo and the cordon sanitaire on the USSR. Not the sort of policies you would enact if you were not ideologically afraid (because militarily the Soviet Union was then very weak). The threat intensified again after the World War II when the Communist influence through all three channels was at its peak. And then it steadily declined so much that by mid-1970s, it was definitely small. The communist parties reached their maximum influence in the early 1970s but Eurocomunism had already expunged from its program any ideas of nationalization of property. It was rapidly transforming itself into social democracy. The trade unions declined. And both the demonstration effect and the fear of the Soviet Union receded. So capitalism could go back to what it would be doing anyway, that is to the levels of inequality it achieved at the end of the 19th century. “El periodo especial” of capitalism was over.

I am not sure that this particular story can alone explain the decline in inequality in the West, and certainly it is a story that one hears less often in the US than in Europe, as the United States believed itself to be sufficiently protected from the communist virus (although when you look at the repression in the 1920s and McCarthyism in the 1950s, one is not so sure). But even Solow’s recent mention of the changing power relations between capitalists and workers (the end of the Detroit treaty) as ushering in the period of rising inequality is not inconsistent with this view. In a recent conversation, and totally unaware of the literature, an Italian high-level diplomat explained to me why inequality in Italy increased recently: “in the 1970s, capitalists were afraid of the Italian Communist Party”. So there is, I think, something in the Albuquerque Sant’Anna, and K. S. Jomo and Popov stories.

The implication is of course rather unpleasant: left to itself, without any countervailing powers, capitalism will keep on generating high inequality and so the US may soon look like South Africa. That’s where I think differently: I think there are, in the longer-term, forces that would lead toward a reduction in inequality (and that would not be the return of Communism).

I think the fundamental question that these and similar papers ask is the following: does capitalism contain “automatic stabilizers” that would curb the rise of inequality before it goes over the top? Or do “stabilizers” always have to be revolutions, wars and economic crises? I do not think that we have an empirical answer to this.

This post was first published on Branko Milanovic’ Blog