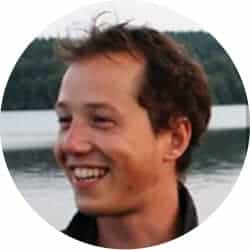 In its annual report, the European Central Bank clearly acknowledges that its ‘quantitative easing’ (QE) program has increased the richest citizens’ wealth. Yet the ECB claims that this is not its concern.

Since the inception of QE in the Eurozone, it has been clear that such a program would not only have limited effects on growth and inflation but would also carry important unintended consequences, including a rise in wealth inequality.

This is because of rather logical market behavior: a sudden rise in demand for certain products or services automatically provokes an increase in prices if there is no corresponding rise in the supply of those products. 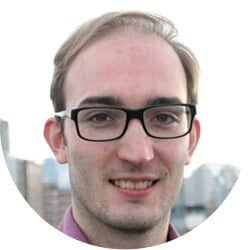 This is an unavoidable effect of QE too. When central banks massively inject liquidity by purchasing sovereign bonds, this pushes up the value of those bonds – and affects other market segments too as QE fosters demand for corporate bonds and equities.

This well-understood logic has already been acknowledged and evidenced in the past by central banks. In a remarkable paper, researchers at the Bank of England measured the distributive impact of its own QE program in 2012 and concluded:

By pushing up a range of asset prices, asset purchases have boosted the value of households’ financial wealth held outside pension funds, but holdings are heavily skewed with the top 5% of households holding 40% of these assets.

Now the ECB has found similar trends. In its latest annual report, it sets out an exclusive assessment of the distributive impact of QE in the Eurozone. According to its own research findings, capital gains in bonds and equity markets, which were fueled to a large extent by its QE, have increased the net wealth of the richest 20 percent by roughly 30 percent or far more than the other segments of the population. The outcomes are best summarized in this chart: 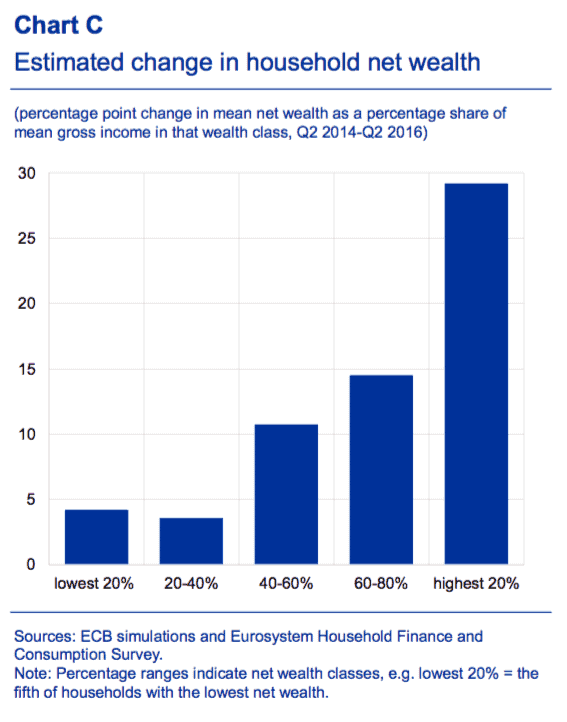 Euro Area households that hold financial assets, such as stocks and bonds, are strongly concentrated at the top end of the net wealth distribution. As such, only a fairly small subset of the population benefits from capital gains in equity and bond markets; three-quarters of the population do not benefit at all.


While the bank acknowledges this inegalitarian effect, it claims that QE has had positive effects (lowering unemployment and maintaining price stability) which justify the rise in wealth inequality. In other words, the ECB argues that this monetary trickle-down is the best policy for the Eurozone as a whole. In a 2014 speech, ECB’s Yves Mersch, even claimed : ‘These distributional side-effects need to be tolerated’.

However, while there is a kernel of truth in this idea, it only applies in specific circumstances. When the financial crisis broke out, the urgency of the situation meant that the lack of new monetary instruments, such as QE, could indeed have led to worse outcomes in terms of growth and employment. Yet, almost ten years later, central banks should acknowledge the limits of their actions and consider more seriously their unintended consequences.

Moreover, the ECB tends to overestimate the positive effects of the increase in financial prices on the real economy. Indeed, the rising price of financial assets does not automatically lead to more lending from the banks to the real economy and to more investment and job-creation. Banks rely on rising asset prices as a means of meeting the new Basel III capital requirements or for increasing their activities in wholesale rather than in retail banking. Second, rather than fostering capital investments for long-term growth, high stock values lead to more share buybacks, dividend payments and high-premium mergers and acquisitions.

In addition, while QE may have had a direct impact on job-creation, there are questions on whether such lower unemployment significantly contributes to reduced inequality. Given the worrying rise in precarious jobs and in-work poverty, we question the ECB’s assumption according to which more employment is necessarily leading to lower inequality.

Why the ECB should and can address inequality

But perhaps a more important point is whether the ECB should do something about this issue at all? In its report, the ECB says it should not: ‘Tackling any unwarranted redistributive effects is not in the realm of monetary policy in view of its primary objective of price stability. Governments can shape the income and wealth distribution via their policies, notably via targeted fiscal measures’.

So the ECB basically thinks that it falls to governments to deal with the problem it created in the first place. This is weak reasoning. First, because there are practical limitations to what governments can do in that respect in current circumstances. As Fontan, Dietsch and Claveau wrote:

Under conditions of capital mobility, redistributive taxation has become a lot harder to implement in recent decades. Therefore, when the fiscal hands of the state are tied, monetary policy should be more sensitive to the inequalities it creates than otherwise.

Moreover, unlike other negative side-effects of monetary policy, the fact that QE exacerbates wealth inequality is a direct consequence of that programme, as opposed to a consequence of a combined set of policies. Therefore, it falls to the ECB to deal with it.

Fundamentally, we would argue that the ECB has a responsibility to address the inequality consequences of its policy because this issue was predictable at the time it adopted it (thanks to previous QE experiments in the UK, US and Japan).

Last but not least, the ECB should address this issue because, all things being equal, it can do so. It could implement alternative policies that would both contribute to its price stability objective, while not increasing inequality. The proposal of the campaign QE4people for a citizens’ dividend would be one way to do so. Under such a scheme, the ECB could have injected a quarter as much money as under QE and distributed instead say €1,000 to all adult citizens in the eurozone. The measure would arguably have had similar effects than QE in boosting consumption and could be implemented independently by the central bank.

Admittedly, this is a rather bold proposal. But if central bankers are so creative when it comes to designing technically convoluted programs such as OMT, TLTROs, CSPP and negative interest rates, they can equally think seriously about adopting more citizen-friendly and inequality-hostile measures.