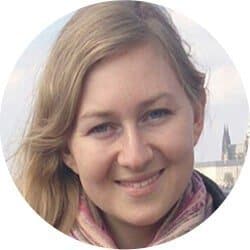 Non-EU women immigrants make up about six percent of the prime-age population (25-54 years old) in the EU15 countries. Their lack of integration into the labour market is not only a story of lost opportunity at an individual level. It also carries important macroeconomic and social implications.

Take the example of European countries such as Belgium or Finland, where the difference in employment rates between native and non-EU born women is close to or over 30 percentage points (Eurostat, 2016). If non-EU women were to catch up with native women in the labour market, it could mean an increase in total employment of up to two percent. Even the more modest ambition of reducing the employment gap for women immigrants to that of their male counterparts would have a significant employment effect that, even in the face of documented discrimination, should be attainable. 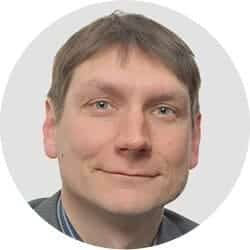 Not being in employment means relying on social assistance and the income of a partner. This translates directly into much higher rates of risk of living in poverty. In Belgium, for instance, this implies that one in two non-EU migrant women is at risk of poverty and social exclusion as defined by Eurostat. For native-born women the number is one in seven. In terms of social implications, gender equality represents an important European value: the low economic activity of non-EU women may be interpreted by the native-born population as a lack of willingness to integrate on the part of immigrants (see here), and hence may contribute to the formation of negative attitudes toward immigrants.

A part of the large gap in employment rates can be explained by the fact that non-EU immigrant women are on average different from native-born women in important aspects. Immigrant women have less education and are generally younger. Once these characteristics are taken into account, the differences in employment become smaller, but they still constitute over 15 percentage points in many EU member states (Figure 1).

Figure 1. Conditional employment gap of non-EU immigrants relative to the native-born population in the EU15, by gender 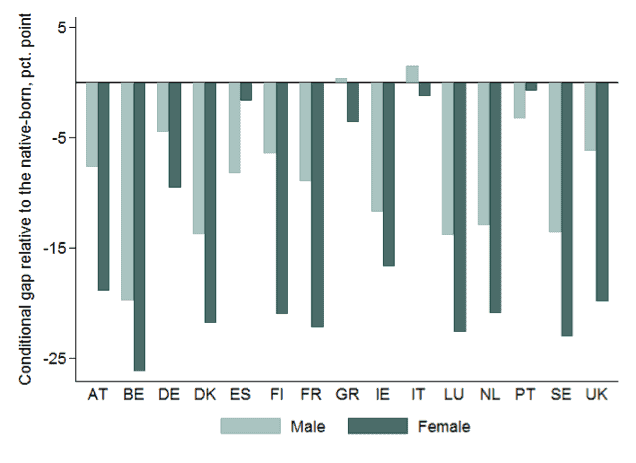 Note: Age group 25-54. Immigrants are defined based on their country of birth. Differences in employment rates are conditional on age (five-year intervals), education level (low, medium, or high) and survey year.

Source: Own calculations using GSOEP, 2008 and 2014 waves (data for Germany) and Eurostat, Ad hoc Migration Modules 2008 and 2014. Eurostat data for Denmark, Ireland and the Netherlands are only available for 2008.

If not age or education, how else can we explain the low employment rates among non-EU women immigrants? One commonly cited factor is the persistent influence of one’s original culture. Female labour market participation is traditionally low in many countries of origin of non-EU immigrants; for example, the economic activity rate of women in Syria was 15% in 2011. Several empirical studies indeed provide evidence that conservative cultural norms regarding female economic participation can explain some differences between men and women’s labour market integration early after their arrival as well as their speed of integration.

Which policies will foster employment among non-EU women immigrants? While changing cultural norms and preferences of immigrants can be a challenging task for policy-makers, removing structural constraints to employment – such as access to work, education and social institutions – appears to be a more concrete and, hence, feasible task to implement. About 60 percent of non-EU women arrive in the EU as accompanying family members. They may, thus, face direct employment restrictions, such as the requirement to apply for a work permit or to pass a labour market test (an administrative procedure to confirm the lack of eligible EU nationals who could be employed in a given position) in the first year(s) after arrival. For instance, analysis of the European Labour Force Survey (EU LFS) data collected by Eurostat shows that the presence of direct employment restrictions is associated with a six to ten percentage point lower chance to be employed among non-EU women with similar characteristics (MEDAM Assessment Report 2018, forthcoming). This initial restriction may have a ‘scarring’ effect and lead to a worse long-term employment outcome. In addition, women immigrants can experience indirect obstacles – insufficient information about the labour market or the ineligibility to benefit from childcare facilities. Therefore, identifying and removing such structural constraints that hamper non-EU women immigrants in particular from entering the labour market represents an important and necessary first step towards increasing their social and economic integration.