Why has modern monetary theory come out of the academy? Because it helps model the current economic predicament and how to get out of it. 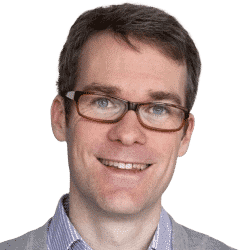 Anything we can actually do we can afford. Once done, it is there.

Modern monetary theory (MMT) has received a lot of attention recently. Alexandria Ocasio-Cortez, rising star of the US Democratic Party, builds her policies—such as the Green New Deal—on MMT and asks the media to read up on monetary theory. Bernie Sanders, presidential runner, is advised by Stephanie Kelton, one of the leading MMT economists.

In Europe, according to Germany’s biggest newspaper, MMT is on its way to becoming the economic theory of the left. And the Social Europe columnist Peter Bofinger, formerly a member of Germany’s Council of Economic Experts, has written that ‘the combination of expansive fiscal policy and expansive monetary policy is a very powerful tool, which should be used if needed and at the same time handled with great care’.

The new thing about MMT is its focus on balance sheets. It examines how governments spend and tax, how central banks and other banks lend and how the private sector borrows and repays. MMT, which is based on more than a quarter century of academic work and cannot be explained in one blog post, has produced insights which have been confirmed since the start.

The biggest insight is that one must divide currency issuers from currency users. Currency issuers are free from technical balance-sheet constraints. If they wanted to, they could increase spending without limit. This works best if there is no outstanding public debt in foreign currency and there is a flexible exchange rate. Countries where this applies include the United States, Canada, Japan, the United Kingdom, Sweden, Switzerland and many more. There are also political constraints, such as the public debt limit in the US, national ‘debt brakes’ in Europe or the Stability and Growth Pact in the eurozone. Rules are however not always enforced, so technically the eurozone is just like any other currency area, even if politically it is not.

The simple macroeconomic model below is based on the insight that (national) income is caused by spending, and that spending has to come from somewhere. Increases in short-term spending and hence short-term debt—private, public or foreign—lead to a rise in income. Be it an increase in government spending, in debt-financed private investment and/or in exports, all these transactions create new net (bank) deposits in the economy. Deposits are in turn drained away by private saving (repayment of debts, for instance), taxation and imports. It is thus plausible that there is a relatively stable connection between changes in net deposits and income. An injection of net deposits is expansionary, whereas their leakage is contractionary. This is shown below. (We ignore inflation and the quantity equation relating the price level and the quantity of money, P(/V)=M/Y.) 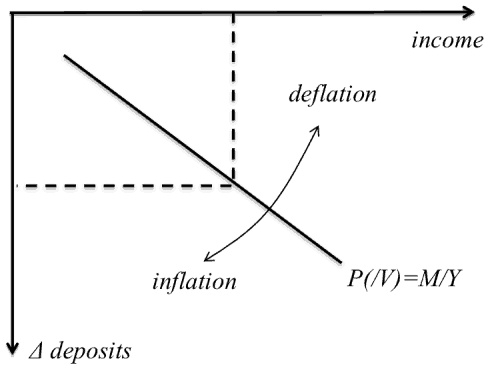 Stressing that incomes (Y) and expenditures (AD) have to balance, we can then plot one against the other on a 45-degree line. Assuming that private investment I, government spending G and exports are exogenous and that consumption C, private saving Sp, taxes T and imports depend on national income, we arrive at the following figure (including net exports NX). 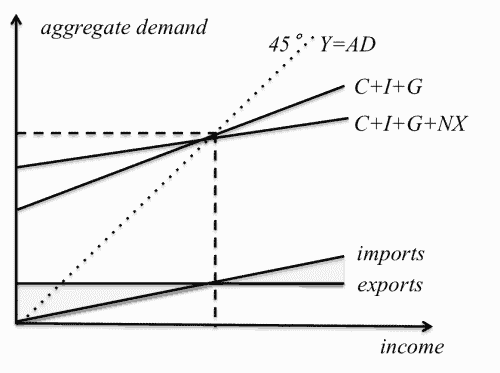 We examine the sectoral balances that are derived from the model. The changes in financial savings of the private sector are private saving minus investment (Sp-I), those of the public sector equal tax income minus government spending (T-G) and those of the external sector (the rest of the world) equal imports minus exports. The way that the above diagrams are drawn—and adding the assumption that tax income (not shown above) is equal to government spending—the change in net financial savings of the private sector is zero. This follows from the balanced current account and the public budget’s balance. 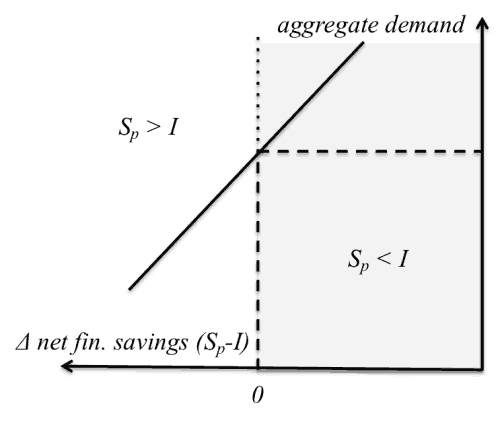 We can now move to the total model, which consists of the three parts from above. 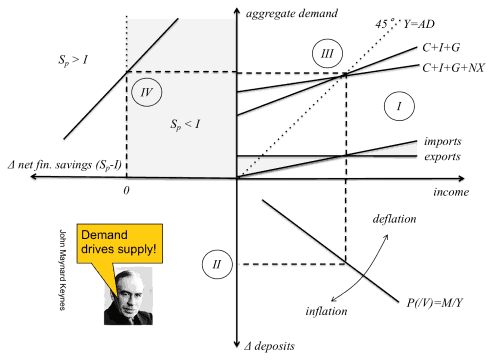 Simulating an increase in private investment I, the economy will improve as employment rises with the rise in national income. This resembles the real-estate bubbles that we saw in the 2000s in Spain and Ireland. 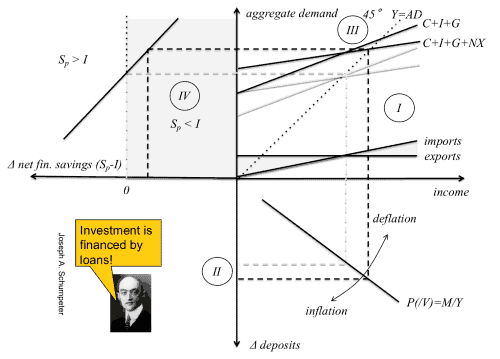 Since what cannot last forever has to stop at some time, we then move to the collapse in private investment I that is caused by a change in expectations regarding future real-estate prices and the likelihood of the next generation of young people being willing to load up with debt to buy a house or flat. 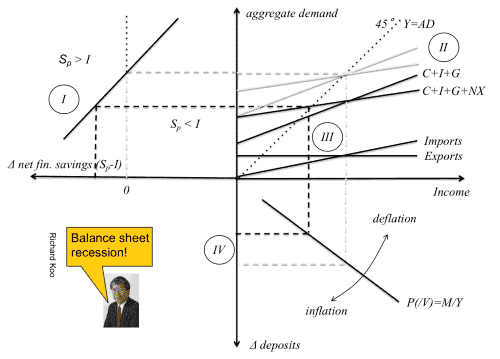 Note that the economy contracts, with imports falling below exports. Still assuming a balanced government budget, this allows the private sector to end up with positive net financial savings (Sp-I>0). These are needed to repay old debts and rebuild net wealth. The fall in national income means that we have substantial unemployment as the level of private spending (C+I), given public spending G and rest of the world spending, is too low to lead to full employment. If private investment I cannot be stimulated through a zero-interest rate policy at the European Central Bank, then government spending G is the only game in town. As Hyman Minsky argued, the inherent instability of the capitalist economy can be dampened by relying on Big Bank and Big Government. 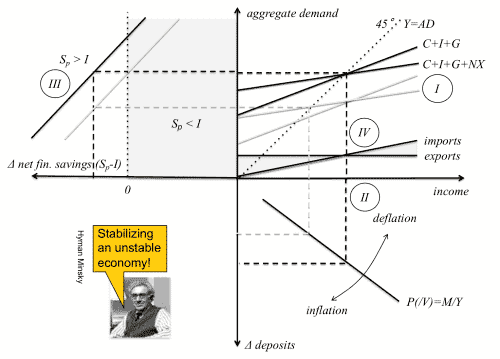 The increase in government spending G allows the private sector to rebuild its balance sheet while sustaining a level of demand that is compatible with full employment. In the eurozone, the situation is complicated by the fact that the monopoly supplier of currency, the ECB, is allowed to lend to banks but not to governments.

The eurozone’s economic woes are due to political constraints which derive from the construction of the eurozone itself—not from a lack of competitiveness or too much (private or public) debt or technical constraints. These constraints can be addressed politically and fixed. A euro area Treasury would be one way to move forward, as envisaged by the European Commission.

Modern monetary theory thus helps to understand where the eurozone’s problems come from—and how to fix them.