Sweden needs a ‘joined-up’ approach to climate change or it will fall well short of its responsibilities.

All reports are clear and conclusive: the transformation to a fossil-free society must accelerate—starting now.

In its latest report last month, the Intergovernmental Panel on Climate Change affirmed that only three years remain until it will be too late to keep the global temperature rise since pre-industrial times below 1.5C. In eight years we shall begin to exceed this threshold. Current policies will, if continued, mean an unliveable excess of 3C or more, this century.

At the beginning of June, politicians and activists from all over the world will gather in Stockholm to celebrate the memory of the first global environment conference, ‘Stockholm 1972’. More importantly, they will press for more action: greenhouse-gas emissions in the decade 2010-19 were the highest in the history of mankind—and they continue to increase.

The host-country, Sweden, is by no means an exception to this failure. The government´s own agency for evaluating the path to a fossil-free society, the Swedish Climate Policy Council, writes in its recent report that policy plays a key role in climate transition and the government needs to show more leadership:

Overall policy is not just the sum total of laws, rules and budget items. It is about the many aspects of leadership, formulating common goals, and making the path towards these goals understandable and a matter of urgency.

Governance in Sweden has so far proved inadequate to achieve the desired results. The climate council points out that the contribution of different policy areas must be strengthened to accelerate the transition and there must be better co-ordination. This is especially true of how the government utilises its agencies.

The Swedish governance structure is characterised by a relatively small Government Office and a very large family of ‘independent public agencies’, all with a role in the climate transformation. But they lack a clear mission from the government to go ahead, perform the transition and do it together. Instead, the silo structure within Swedish government is very strict, making a proactive, holistic approach with a system perspective very difficult—not to say impossible.

This is, according to the experience and knowledge of many, the main reason why today Sweden does not have climate policies adequate to the challenge. It has been at the forefront: electricity and heat production are already almost fossil-free and Swedish industry only emits about a third as much as corresponding production in other countries.

But the pace of transition is slow: with the exception of Covid-19 effects, emissions have been falling by only about 1 per cent a year. Continued incremental measures will not be sufficient to reduce the substantial emissions remaining from industry, transport and agriculture. Achieving Swedish climate goals requires more than a halving of emissions by 2030.

The Greta Thunberg generation and of course many older citizens cannot understand why political priorities, public debate and official action continue to ignore the fact that all over the world we are moving steadily in a direction that will seriously worsen conditions for a good life. With deteriorating living conditions, social tensions will grow and serious conflicts will occur, which in turn will make good government and democracy even more difficult.

Running out of time

We are running out of time. The climate council says Sweden can and should be at the forefront of accelerating progress towards a fossil-free society. There are solutions for almost any type of emission, without significant increases in cost. All the conditions are in place: citizens, the business community, the parliament and the European Union are in consensus.

Sweden can attain a fossil-free welfare society by 2045—it can do it even more quickly, according to recent calculations by the Environment Agency. ‘Only’ the political leadership and action is awaited.

The detail of this path is clear. A report by Material Economics in 2021—part of the project ‘Climate Agenda: transforming Sweden’, by the independent think tank Global Utmaning, to produce a coherent plan for Sweden’s transition to net-zero greenhouse-gas emissions—showed that emissions could be reduced by 50 per cent by 2045 through electrification and use of hydrogen.

Biomass could contribute a 10-15 per cent reduction and increased resource efficiency and circular processes 20 per cent, the report said. Carbon capture and storage (CCS), in the context of cement production and waste incineration, could reduce emissions by a further 10 per cent. The remaining 10 per cent could be managed through negative emissions, primarily through bio-CCS.

Last but not least, this has to be a just transition. Investments in retraining will be needed at an early stage to match those losing jobs in the structural changes associated with the emerging labour market. And new transport systems will be required to secure mobility for those living in the sparsely populated countryside.

Sweden has the potential to become the world’s foremost green industrial nation and secure welfare, jobs and the climate. But if it is not to fall behind, radical measures are needed today. 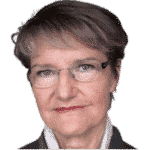 Kristina Persson is senior advisor to the research programme FAIRTRANS (Fair transformation to a fossil-free society) at the Stockholm Resilience Centre. She is a former Swedish-government minister for strategic development and Nordic co-operation and founder of the independent think-tank Global Utmaning.