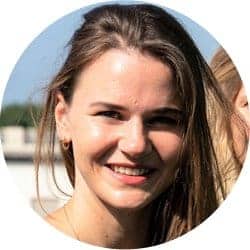 Over the last two years, economic expansion in the euro area has gathered pace. So far, improving economic conditions and falling unemployment has only translated into higher wages to a limited extent: Since 2013, GDP per capita has expanded on average by 1.2% annually while real wages have risen by just 0.7%.

The conventional explanation for the weaker performance of wages is that labour productivity growth has lagged behind GDP growth. However, figure 1 shows that not only after but already before the crisis a substantial decoupling between productivity and wages occurred. Since 1999, labour productivity has on average increased twice as fast as labour compensation.

Figure 1: GDP per capita, labour productivity & wage developments in the euro area since 1999 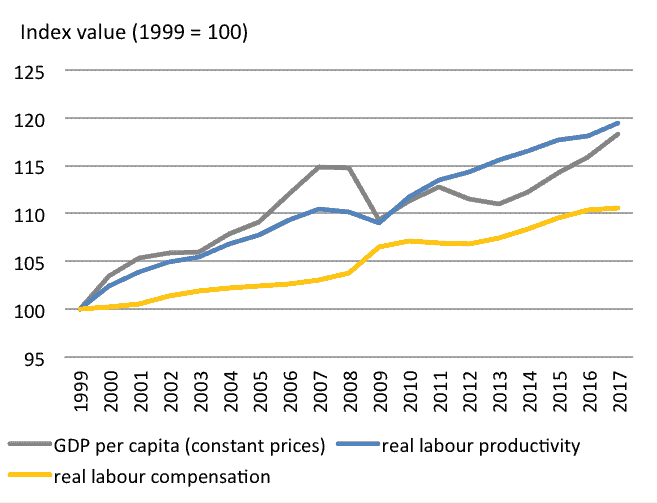 Source: Authors’ own calculations based on Eurostat, AMECO. 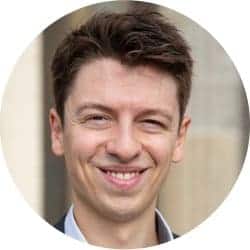 But does the story of a wage-productivity gap, which holds for the euro area at large, also apply when looking at individual Eurozone countries? To answer this, let’s take a look at the four largest Eurozone economies that together account for around 75% of euro area GDP. What we see is vast differences with regard to the interrelationship between productivity and wage developments, suggesting that a uniform narrative masks differences in cyclical conditions (such as in the labour market and inflation) as well as deeply embedded structural and institutional differences (such as sector specialization and wage bargaining systems).

Germany is the text book example of a wage-productivity decoupling. While labour productivity grew at an average of 1.6% per year between 1999 and 2007, real wages declined. The early 2000s were the years when Germany became known as the sick man of Europe, troubled with stubbornly high unemployment and low growth. Concerns about competitiveness, a recession in 2002/2003 and labour market reforms exacerbated wage restraint. Nevertheless, it took wages until 2011 to reach their 1999 level, when GDP per capita was roughly 18% above the starting point and real productivity increased by 16%. Although wage growth outperformed productivity growth in the following years, the wedge between productivity and wage development remained substantial.

Source: Authors’ own calculations based on Eurostat, AMECO.

By contrast, France experienced a more aligned development of productivity and wages in the observed period. In the early 2000s France was in a better economic condition than Germany and its economy expanded relatively steadily until 2008. In this period productivity growth outperformed wage growth, although to a more moderate extent than in Germany. Wages, already the highest among the four economies, rose by 7.7% up to 2008. Thereafter, they continued to grow at a relatively even pace but productivity started to fall behind, although both measures stayed closely aligned. It is noteworthy that France’s post-crisis economic recovery was much weaker than Germany’s or the Eurozone average, and that wages grew faster than the economy at large for much of the period after 2008.

The Spanish boom of the 2000s is hardly mirrored in real productivity and real wage increases. Two factors might lie behind this: On the one hand, the boom largely depended on the construction and financial sectors, where productivity gains are either small (construction) or come in the form of capital deepening rather than labour productivity gains (finance). On the other hand, high inflation kept real wage increases at a moderate level. Spain was severely hit by a double-dip recession, which led to a significant decline of real wages by almost five percentage points up to 2012. At the same time, real labour productivity grew at a solid pace, opening a wedge between the two indicators. When the economy rebounded in 2013, wage pressures remained weak due to high unemployment. Labour productivity, however, continued to improve, resulting in a quite substantial internal devaluation that strengthened Spain’s cost-competitiveness. Looking just at wages and productivity, Spain’s post-crisis development mirrors Germany’s pre-crisis development.

Italy stands out as the only one of the four economies with a lower per capita GDP in 2017 than in 1999. Like Germany, Italy experienced a period of low growth in the early 2000s. The crucial difference with Germany and France was, however, that labour productivity growth also performed weakly at just +0.3% annually between 1999 and 2008. Wage developments did not diverge much from productivity before or after 2008 but the weak performance of the former meant that up to 2017 real wages in Italy increased by a meagre 3.2% on 1999 levels. In 2017 the economic recovery in Italy remained very weak, GDP per capita was still nine percentage points below the 2007 level and sluggish productivity growth then and now does not suggest any significant change in the medium-term. The problem becomes even more apparent when considering that Italy continuously falls behind the EA average, so while living standards remain constant by Italian standards they lag those of their main trading partners.

It emerges from this that the euro area average, marked by a decoupling of productivity and wages before and after the crisis, hides vast differences in the interrelationship between wages and productivity in individual member states:

These observations suggest that the Eurozone is still some way from a condition where imbalances can be taken care of through product and labour markets. Diverse economic structures and institutions have produced very different reactions to recessions and the ability to boost productivity and thereby improve competitiveness and wages varies.

This puts the potential of the current proposals for euro area reform into perspective. Beside debates about a reformed ESM or a euro area budget, sound coordination of economic policy needs to avoid future imbalances, which could leave countries more vulnerable to asymmetric shocks. The slow-motion crisis in Italy, causing the country to steadily fall behind its peers, is paradigmatic for the remaining structural risks that are now being masked by a euro area-wide cyclical upswing. This does not mean that a strengthening of crisis-response instruments is irrelevant but it does highlight that coordination of economic policy is at least as important as stabilization.